Remembering the Past - Bloody Sunday Part 3

The IRA's dramatic elimination of the British spy network on 21 November 1920 and the British massacre of civilians at Croke Park overshadowed the murders on the same day of three political prisoners in Dublin Castle.

Dick McKee from Finglas joined the Volunteers in 1913. During the 1916 Rising he served in Jacob's Factory under Thomas McDonagh. After the surrender he was imprisoned in England and was released in August 1916. He subsequently became Brigadier of the IRA's Dublin Brigade and was also Director of Training on GHQ staff. 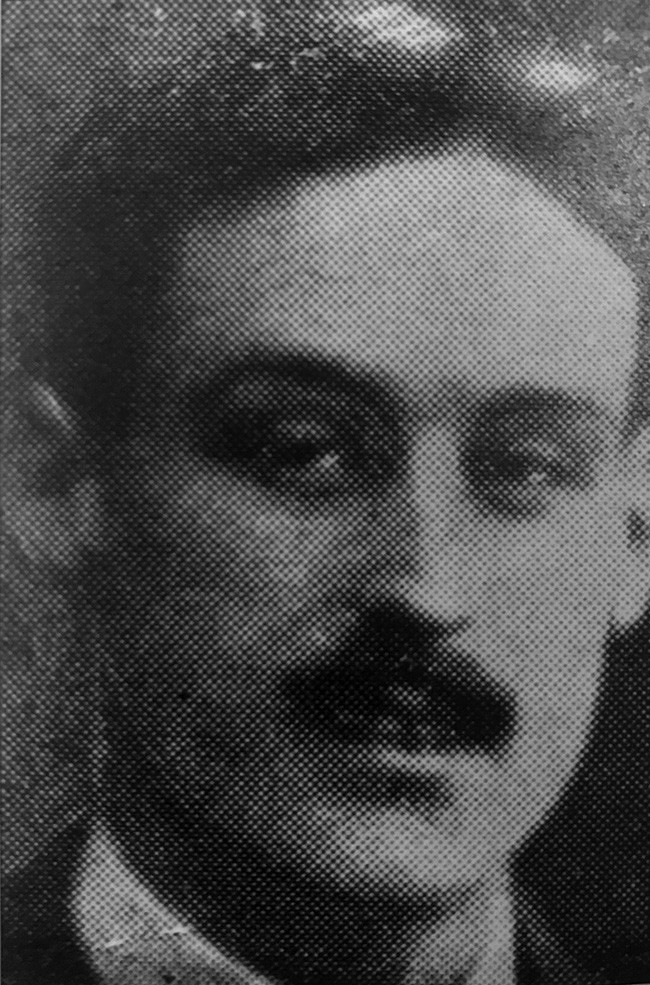 McKee found himself back in jail by 1918 as a political prisoner in Dundalk. He took part in the first unsuccesful ambush on Lord French in Dublin's Dame Street, and he and Rory O'Connor and McKee planned and executed the succesful escape from Mountjoy Jail of Piaras Beaslai, Paddy Fleming and JJ Walsh. From a base in Aungier Street he printed the IRA’s internal newspaper An t-Óglach and he took part in the evacuation of Dan Breen from the Mater Hospital after Breen was seriously wounded in action. Before his murder, McKee was on full time active service with the IRA. 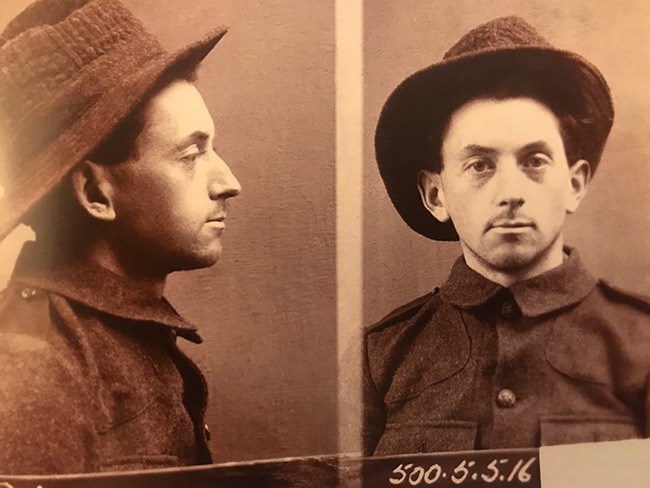 Peadar Clancy, a native of Carrowreagh East, Cranny, West Clare, was a partner in a drapery business called The Republican Outfitters, located in Talbot Street in the centre of Dublin. During the Easter Rising he served in the Four Courts Garrison. He was court martialled and sentenced to death. However, his sentence was commuted to Penal Servitude for ten years. He remained in an English jail until the amnesty in 1917.

He was selected as the Sinn Féin candidate in the famous East Clare by-election but his candidature was not ratified by GHQ and Eamon de Valera was selected at a second convention in Ennis.

Clancy became No.2 in the Dublin Brigade with the rank of Vice Brigadier. He was also attached to GHQ and he held the rank of Director of Munitions. He led the successful hunger strike - supported by a general strike of Irish workers - in Mountjoy in April 1920. He commented prophetically: “This fight is only beginning. The Castle isn’t done by a long chalk.”

Clancy resumed active service after his release. He and McKee were betrayed to the British authorities by an ex-British Army serviceman John ‘Shankers’ Ryan. In the early hours of 21 November they were captured in the house of Sean Fitzpatrick on Gloucester Street, now Sean McDermott street, in Dublin's north inner city and removed to Dublin Castle. The famous IRA unit known as 'The Squad', led by Bill Stapleton subsequently executed Ryan in Hynes's Pub on the corner of Lower Gloucester Street and Railway Street.

McKee, Clancy and another Volunteer - Conor Clune, were tortured under interrogation by British secret service in the guardroom and subsequently murdered on Sunday evening, 21 November 1920. 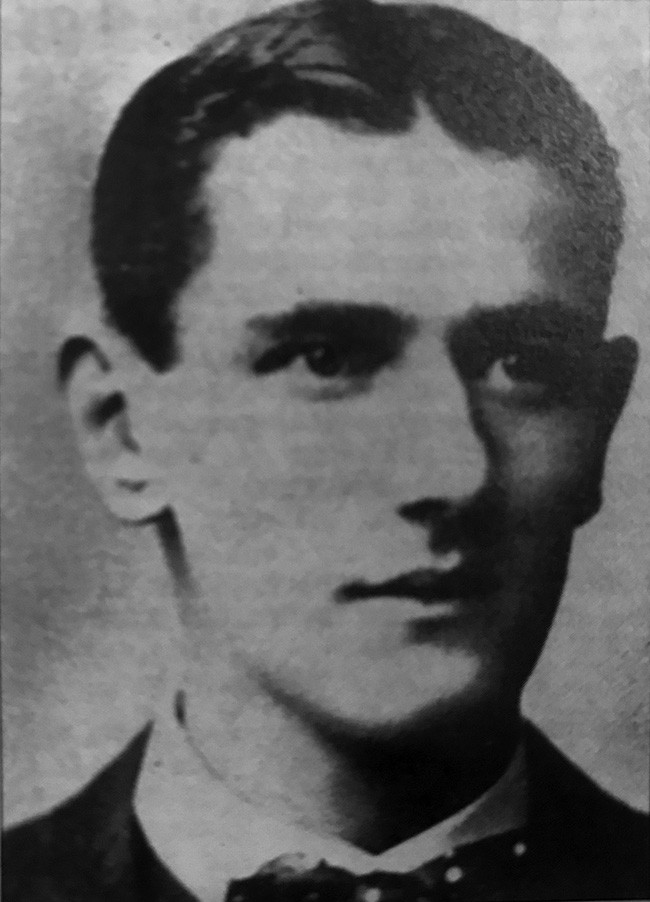 Clune, from Quin in County Clare, an Irish language enthusiast travelled to Dublin on Saturday, 20 November at the request of his employer. He had sought out Piaras Beaslai in Vaughan's Hotel in Parnell Square. The hotel, an important meeting place for the IRA Executive, was raided by the Auxiliaries and Clune was taken prisoner. The British may have exaggerated Clune's role as he was transferred to Dublin Castle where he joined McKee and Clancy who were captured later that night.

Following the liquidation of the enemy Secret Service on the morning of Bloody Sunday the British probably assumed he was an IRA operator drafted in to the city that weekend to take part in the executions. An examination of Clune's body after his murder showed that he was shot 13 times in the chest. 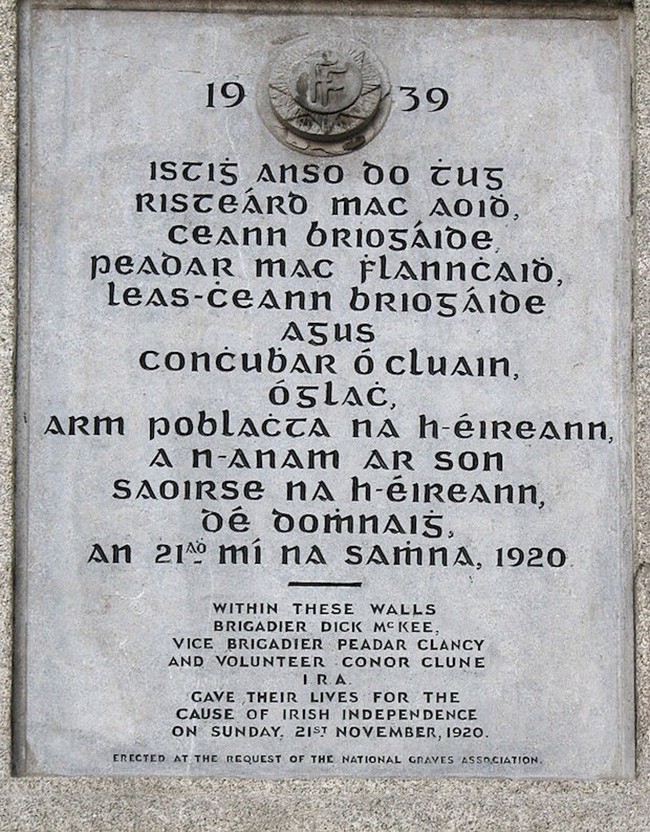 The plaque at Dublin Castle

The British regime concocted the story that the three men, surrounded by armed enemies and helpless in their custody in their very headquarters, were shot after they had contrived to seize arms, attack their captors and attempt escape. But the multiple bullet wounds, as well as the evidence of vicious beatings, gave the lie to this claim.

Several streets in the Finglas area of Dublin are named after McKee, Clancy and Clune and a memorial to Dick McKee stands in the centre of Finglas village. The building where the three were murdered in Dublin Castle is marked with a plaque on the outside wall. 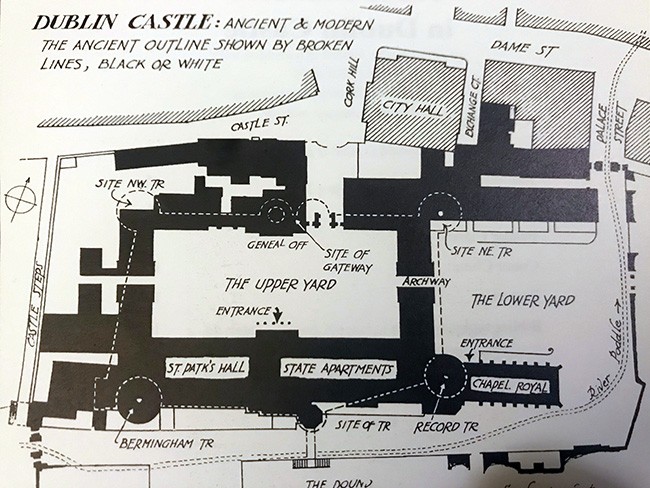 Plan of the Castle