The Bridge of Killaloe

Remembering the Past - The Scariff Martyrs Centenary 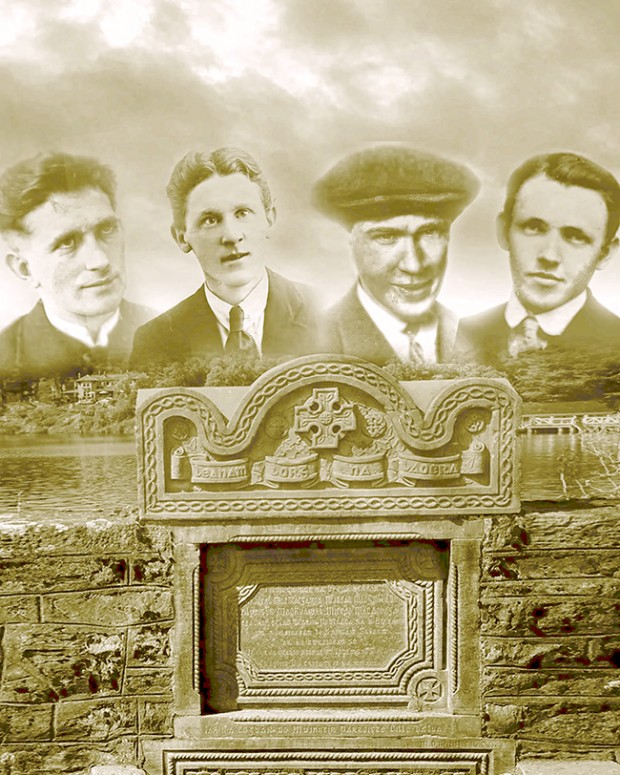 The Bridge of Killaloe spans the River Shannon between the towns of Killaloe, County Clare and Ballina, County Tipperary. This setting, surrounded by beautiful countryside, was the scene 100 years ago of one of the most notorious acts of terror by the British crown forces in the violent month of November 1920.

The month had begun with the execution of Kevin Barry on 1 November. With the war escalating, arrested IRA members now faced trial by court martial and execution like Barry or ‘unofficial’ summary execution when captured by British forces. Lloyd George was telling the British public that he had “murder by the throat” in Ireland and so-called reprisals against civilians were given the nod of approval by the British government. On 2 November a young mother, Ellen Quinn, was shot dead in cold blood by British forces in Gort, County Galway. On the night of 14 November Fr. Michael Griffin was abducted from his home in Galway City by Auxiliaries and taken to Lenaboy Castle where was murdered. His body was found in a shallow grave near Barna. The British government denied involvement but the following year the former head of the Auxiliaries, Frank Crozier, admitted that the force had murdered Fr. Griffin and that Dublin Castle had covered up the crime.

On the day of Barry’s execution a new force of Auxiliaries arrived in County Clare. That same night they raided the town of O’Brien’s Bridge and burned down three homes and severely damaged others. The Auxies, as they were known in popular speech, were based with the RIC at Killaloe, including the members stationed there after the evacuation of the RIC barracks at Scariff following a successful IRA attack. The Scariff Sergeant, Brennan, was intent on revenge for this humiliation and assisted the Auxies in hunting down local IRA Volunteers. Apparently acting on reliable information, the Auxies went up the Shannon by boat to Williamstown House where three Volunteers on the run were staying.

On arrival the Auxies seized the civilian caretaker of Williamstown House, Michael Egan, and demanded to know the whereabouts of the Volunteers. Egan refused to give any information and was beaten up. In the house the Auxies discovered Volunteers Michael McMahon, Alfred Rodgers and Martin Gildea, all asleep, their firearms now useless to them. Their hands were tied and, with Michael Egan, they were taken by boat back down the Shannon to Killaloe to the Auxies’ barracks, the Lakeside Hotel. There they were questioned and beaten. The three Volunteers repeatedly pointed out that the civilian Egan was not with them, but to no avail.

The RIC sent telegrams to the families of the men claiming they were “shot dead when escaping from custody”, a blatant lie as witnesses attested, the men being surrounded and helpless and both ends of the bridge heavily guarded. When the bodies were examined later it was found that each had at least 17 bullet wounds, and those to their heads showed that ‘head shots’ had been fired to ensure they were dead.

As in the case of Fr. Griffin, Frank Crozier later stated that there was a cover-up with a dismissed member of the Auxiliaries paid by the British government to remain silent about the killings.

IRA Volunteers Michael McMahon, Alfred Rodgers and Martin Gildea and civilian Michael Egan were shot dead on the Bridge of Killaloe by British crown forces 100 years ago on 16 November 1920.