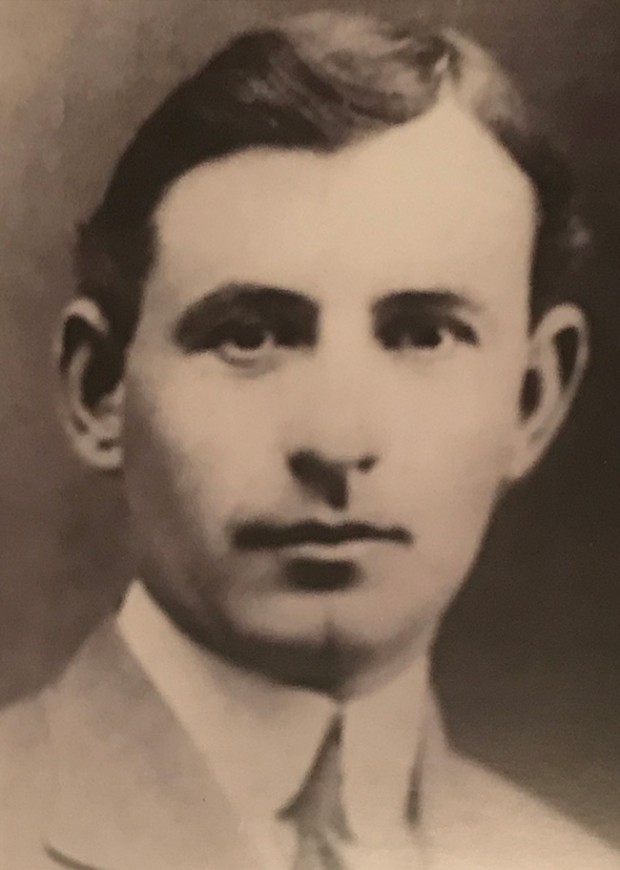 As the British government and its Unionist allies prepared to divide Ireland, and as they planned to put the UVF in uniform and arm them as the B Specials, the UVF was active along the emerging border. One of their victims was IRA Volunteer Michael Kelly, recalled here by Monaghan Sinn Féin activist Caoimhghín Ó Caoláin, former Cavan-Monaghan TD.

The centenary of the death of Monaghan townsman Michael Kelly of Glaslough Street took place on 20th October 2020. A highly regarded businessman, Michael Kelly was also a member of the 2nd Battalion, Monaghan Brigade of the Irish Republican Army. His death, a “wilful murder” as described by Monaghan solicitor JJ Keenan at the inquest, was a consequence of wounds he suffered when he and his brother Joseph travelling from Tydavnet to Monaghan town on Tuesday 19th October 1920, after11pm, were subjected to rifle fire in an ambush carried out by Clones and Monaghan members of the Ulster Volunteer Force, the pro-British armed militia established by, among others, the Dublin born barrister Edward Carson.

Michael Kelly was a 37 year-old single man from a long established and highly respected Monaghan family who had motor car related businesses in a couple of locations in the town.

Michael had earlier in the day transported the Catholic Curate in Tydavnet, Fr. Murray, to a funeral in Enniskillen in Co. Fermanagh. His return home would be his last.

The month of October 1920 saw an intensification of RIC and Crown Forces raids on the homes of suspected Republicans, as well as day time attacks and after dark ambushes which resulted in the on-the-spot execution of 24 Irish Republican Army volunteers across this island. Three volunteers died on hunger strike during October 1920, including Dáil Deputy and Mayor of Cork City Terence Mac Swiney. A further seven volunteers died in direct military engagement with enemy forces over the same period. Among those who died that month in the onslaught of murder visited on Republicans by the British Army and their locally recruited surrogates, was a popular and highly respected Monaghan town businessman, Michael Kelly of Glaslough Sreet. A garage owner, Michael was a skilled mechanic and car dealer. 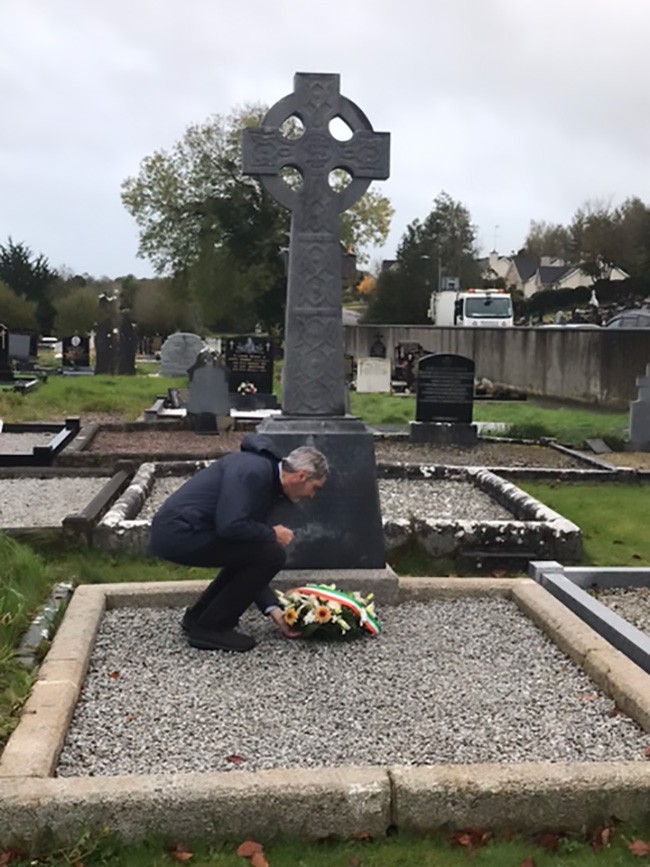 Cllr. Seán Conlon laying a wreath at the memorial to Vol. Michael Kelly in Latlurcan cemetery. Members of the Kelly family attended

On Tuesday night, the 19th of October 1920, Michael Kelly was returning from Enniskillen to Tydavnet to drop off the local curate, Fr. Murray, having driven the priest to a funeral earlier in the day in the County Fermanagh town. From Fr. Murray’s account it is understood that along the road from Scotstown to Tydavnet the lights on the car failed and in the darkness the car hit a ditch and turned over. It took some 15 minutes for both occupants to extricate themselves from the overturned vehicle. Doctor Reynolds of Scotstown attended to Fr. Murray’s injuries while Michael Kelly telephoned his brother Joseph to relay what had happened. Joseph arrived by car to collect his brother. It was approximately 11 o’clock at night and they proceeded to make the journey back to Monaghan town.

On reaching a certain point on their way home rifle shots rang out, some 20 fired in total and from both sides of the road. Michael Kelly was hit and while medical aid was secured on their reaching Monaghan, Michael succumbed to his wounds the following night.

At an inquest summoned the evening after his death, Thursday 21st, convened by the Patrick Whelan, Coroner for North Monaghan ,JJ Keenan, Solicitor, Monaghan appeared for the next-of-kin of the deceased. He sought a verdict of wilful murder, putting it to Michael Kelly’s brother Joseph in the witness stand that it was “apparent to anyone that your brother would have to come back the same way that night”. Joseph Kelly agreed.

Keenan referred to reports that some doctors had received letters shortly before the ambush warning them not to travel out in motor cars after dark. It was widely believed that these threats came from militant unionists in the general Clones and North Monaghan areas, people who then had or previously had involvement with the UVF. During the proceedings the RIC under Head Constable McDonagh entered the room where the inquest was taking place and advised the Coroner that the proceedings were illegal as the RIC had not been given prior notification. Whelan asked the RIC officers to leave to allow him consult the 16-man jury.

Following the consultation Whelan advised Head Constable Mc Donagh that it was the Jury’s decision that the inquest would proceed, irrespective of the consequences.The Head Constable  told all present that they were an unlawful assembly and were taking a risk of subsequent action. The inquest then proceeded with the RIC remaining in the room.

The next witness was Dr. Mc Carville who stated that at about 11:30 o’clock on the Tuesday night he noted a motor containing two men whom he recognized as the deceased and his brother Joseph as they passed him in Park Street. He examined the injured man at his home and found that he had a bullet wound that entered on the right side. It had been subsequently established that the bullet had passed across the chest wall, and ruptured the left lung, fracturing a bone in the deceased’s left arm. He considered the bullet was fired from a distance of about twelve feet and that it was a modern service bullet fired from a rifle. Death was due to shock and haemorrhage.

On Keenan’s further urgings, the inquest was adjourned to allow for other witnesses to be summoned, including “those medical men” who received the reported threats. “There must be some truth in the matter because they cannot be got to attend patients in this district at night” stated  Keenan. The Coroner and Jury agreed and it was further agreed that the remains of Michael Kelly could be interred in the usual way in the meantime. 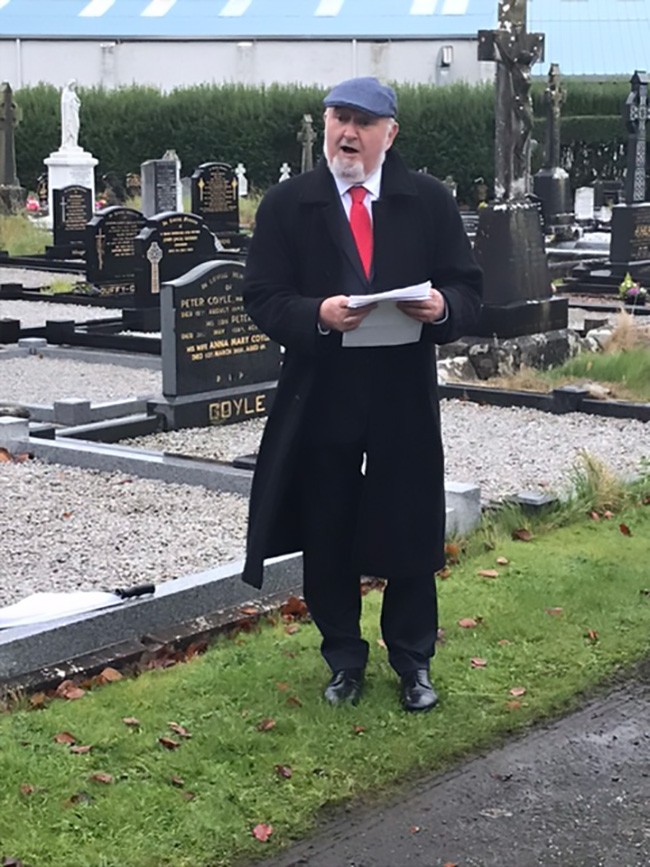 Michael Kelly was 37 years of age when he was ambushed and killed. He was a single man, popular and highly thought of throughout the community. He was also a dedicated Republican and member of the 2nd Battalion Monaghan Brigade of the Irish Republican Army.

The funeral procession through Monaghan town to St. Macartan’s Cathedral was one of the largest ever seen in County Monaghan.

Up to 1,000 volunteers of the Irish Republican Army marched behind the hearse as the cortege made its way through the streets of Monaghan. Businesses along the route closed and up to 1,500 others including members of Cumann na mBan, the Boy Scouts, Sinn Féin elected representatives, members of the various Trades Unions, all joined the huge turnout of local people.

Following the funeral Mass the procession re-formed and marched the remaining short journey to Latlurcan Cemetery where full military honours were rendered. Reports of the final laying to rest of Vol. Michael Kelly state that some 40 wreaths were laid.

100 years after his sad and tragic passing, we remember Michael Kelly and we salute him for the life he led and the service that he gave to our country’s long and troubled march to freedom, to justice and to lasting peace. That journey is still being travelled. In these most unsettling of times it is important to remain vigilant and to keep ourselves informed on the issues that can and will impact on all our lives. Brexit, and the prospect of a reimposed border on our island, demand a united and concerted rejection by all political opinion on this island. But that is not as it is. While Ireland remains divided, while part of our island remains in the grasp of an ever-fading Britannia, we will ever be doubly challenged by the whims of Little Englanders and global pandemics. Our governments of whatever hue can never truly act in full confidence of serving the Irish national interest. We all need to prioritize the ending of Partition, the reunification of our island and all its people, the creation of a new all-Ireland Republic worthy of the name and of the allegiance of all who view this island as home.

In memory of Vol. Michael Kelly and of all who have given honourable service in the cause of Irish freedom, let us all pledge to invest our talents and energies in this great pursuit. Let that achievement be our legacy and the laughter and joy of generations yet unborn our reward. Le cúnamh Dé beidh an lá sin linn.