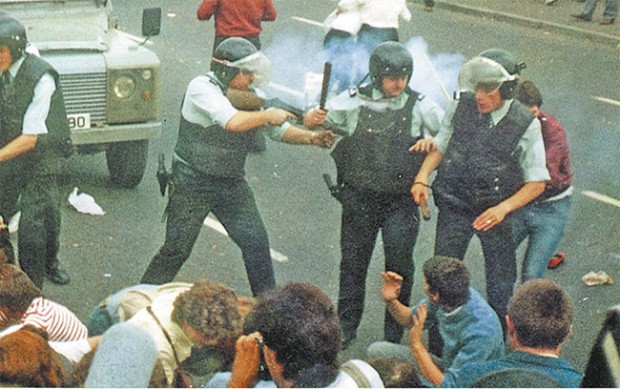 Sean Downes shot by the RUC at anti-internment rally in West Belfast, 1984

The launch of an incriminatory report into the use of plastic bullets in the North has been told that senior British government officials pre-planned the attack on the anti-internment rally in West Belfast in 1984 in which Sean Downes was shot dead by the RUC.

Mark Thompson, Director of Relatives for Justice (RFJ) who compiled the study, said, the report “consolidated into one source all the information around the use of plastic bullets and would be used to re-invigorate the campaign to have these lethal weapons banned”.

The 1984 assault on the annual anti-internment rally occurred as the RUC and British army moved to arrest then United States Noraid official Martin Galvin, who was scheduled to address the commemoration at Sinn Féin’s Connolly House offices. 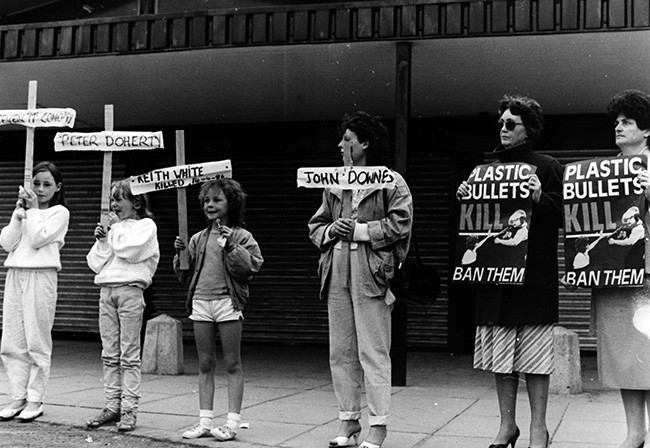 According to recently uncovered British government documents, high-ranking British officials from the Foreign and Commonwealth Office (FCO), the Northern Ireland Office (NIO), the British embassy in Dublin and immigration officials met on July 16, three weeks before the rally, to discuss ways of stopping Galvin from travelling to the North at the head of a 130 strong Noraid delegation.

The high-powered meeting looked at either detention, deportation or serving an exclusion order to block his entry to the Six Counties.

Despite there being no legal options open to the British, not least because Galvin had dual US/Irish citizenship which allowed him the same international legal protection under EU laws as an Irish citizen would, the British decided that Galvin would be barred from entering the North and arrested if he did so regardless of the legal position.

On 12 August as the rally, attended by thousands, gathered at the Andersonstown venue they were met by a large RUC and British army force. 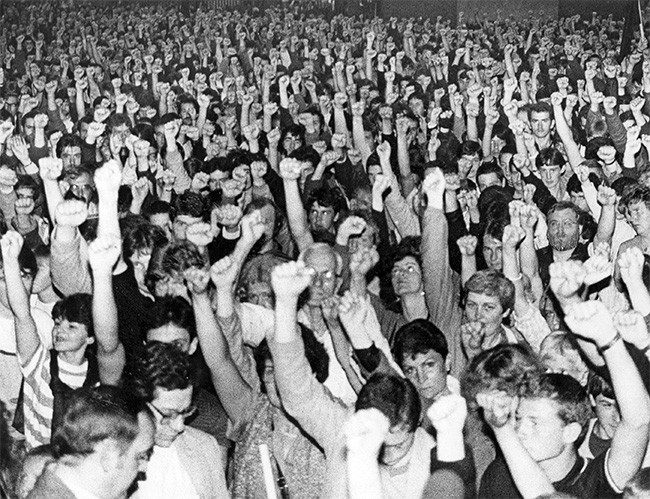 Protest after the killing of Sean Downes

Adding to the belief that the attack on the demonstrators was pre-planned at the highest level the RUC, as soon as Galvin was introduced, immediately opened fire with plastic bullets, Land Rovers drove indiscriminately at people who were sitting on the ground as instructed by the march stewards, while baton wielding RUC members charged striking at everyone and anyone.

Sean Downes, who was shot in the chest from point blank range. was killed while up to 20 others suffered serious injuries.

Other documents uncovered and dated 16 August, four days after the Downes killing reveal that in their attempt to control the fallout from the killing, which was captured on TV, a British Foreign Office official suggested using the footage of Sean Downes who was shot while wielding a stick as justification.

However, he was overruled by a senior civil servant, Anthony Townsend, who maintained that this footage would present Downes as a “legitimate target” and that “such an implication would increase the belief that a shoot-to-kill policy was in operation”. 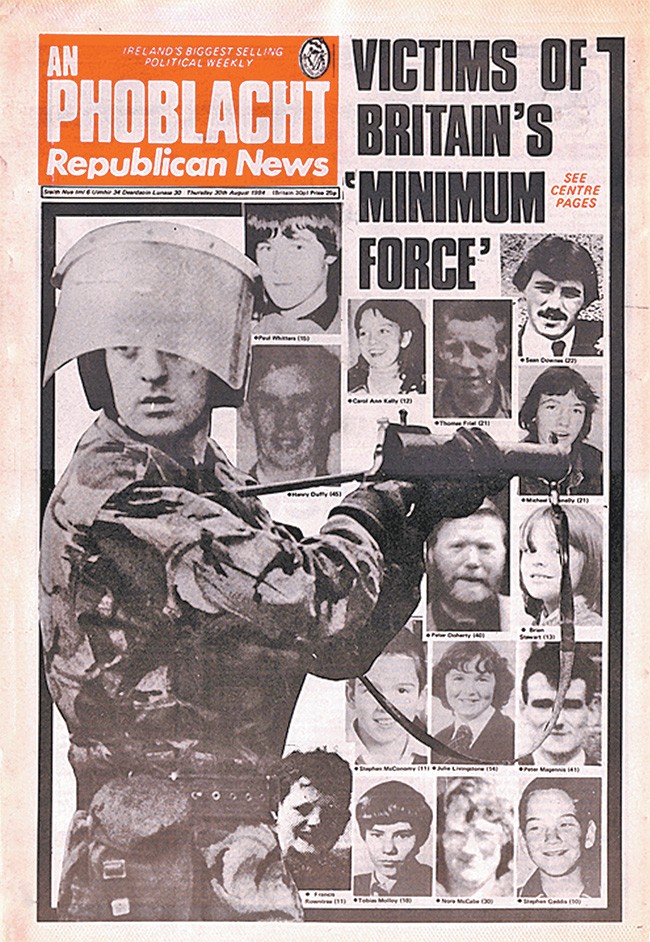 This was at a time when the international legal spotlight was on Britain over accusations of summary execution of IRA Volunteers in clear shoot on sight orders.

Plastic Justice: A Report on the use of Plastic and Rubber Bullets in Ireland was compiled by RFJ legal intern Peter Thompson at the request of long term justice campaigner and co-founder of the United Campaign Against Plastic Bullets (UCAPB) Clara Reilly, who recognised the need to collate the information about rubber and plastic bullets into one accessible source.

In addition, it was felt by the human rights organisation that the issue of “legacy/justice” should be highlighted, particularly considering the increasing attempts by the British government to introduce legislation to effectively give an amnesty to British soldiers responsible for the killing Irish citizens. No serving British soldier or RUC member has ever been convicted of a rubber or plastic bullet killing. Indeed, despite the well documented killing of Sean Downes, the RUC man who fired the shot was acquitted.

Brenda Downes, Sean’s widow, outlined during the launch how she and Sean’s family were excluded from the court proceedings and that her father-in-law was physically blocked from attending the 1985 trial of RUC man Nigel Hegarty. 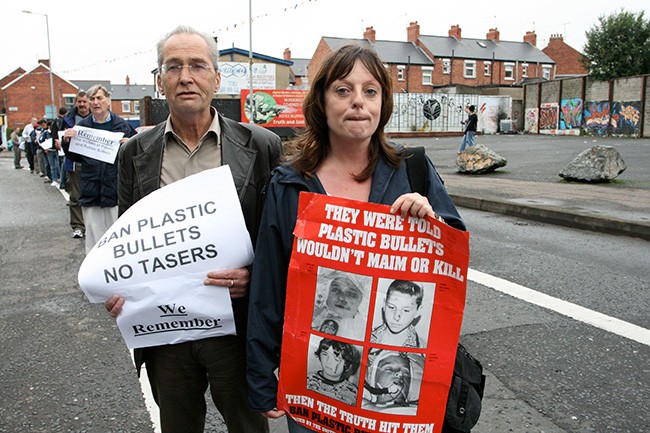 Nearly all the witnesses were members of the RUC who when giving evidence read from prepared statements. Hegarty was not called to give evidence. The Crown accepted his statement. The Crown in their case did not call all the available evidence or even the evidence necessary to clarify what happened.

Hegarty in his statement said he fired his weapon because he believed his life and those of his colleagues were in danger. Judge Hutton, the trial judge, said he believed Hegarty and the RUC’s version of the events. Judge Hutton, who later became Lord Chief Justice, also accepted there was a riot. Hegarty was acquitted.

Concluding, Mark Thompson accused the British of being at odds with all others with a vested interest in resolving the legacy issues including Sinn Féin, the Dublin Government, the Irish American lobby in the United States, the European Union and the UN as well as other nationalist parties in the North.

He added that the Irish Catholic bishops, in a radical departure, had just recently criticised the British over their recent moves to introduce legislation in parliament, the Oversees Operations Bill, which will effectively protect British soldiers from legal scrutiny.