We have a Taoiseach with no opinion on, or plan for Irish Unity 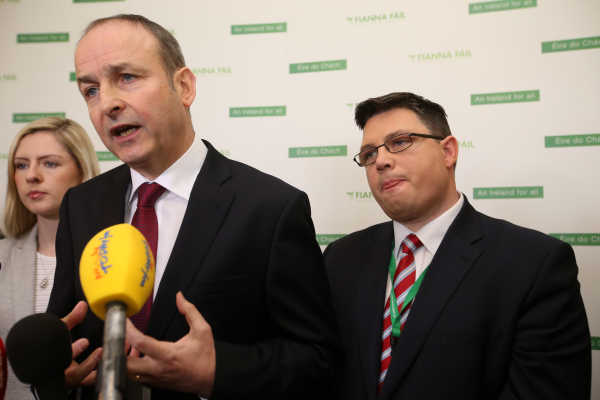 Today the Taoiseach and leader of Fianna Fáil (the self-proclaimed Republican Party) sought to lay out his vision for the future. It was a vague and confused presentation.

He paid tribute to the Good Friday Agreement, recognised the importance of all-Ireland co-operation, and recommitted to invest in cross-border infrastructure and the need for inclusive and informed dialogue. These are all things that Sinn Féin support.

He went on to claim a strong and enduring bond with the British government as a partner and a co-equal guarantor of the Good Friday Agreement. This is a British government that has imposed Brexit on our island, unilaterally ripped up the Withdrawal Agreement and has threatened a return to a hard border. The same government is trying to bin the Stormont House Agreement and introduce an amnesty for their crimes during the conflict.

While Michéal Martin might see himself as a co-equal partner with Boris Johnson; the feelings are hardly reciprocated. This is a British government of little Englanders who know little and care less about Ireland, north or south.

Speaking and taking questions for over an hour, the Taoiseach refused to mention Irish Unity.

We, unfortunately, have a Taoiseach with no opinion on, or plan for Irish Unity. A Taoiseach in denial about the practical, economic and constitutional imperative of uniting our country.  Blind to the changes and opportunities that now surround him, we have a Taoiseach of the status-quo and a leader of a past long over.

The pathway to unity is clear and the rules are agreed. In refusing to consider or to plan for a referendum, the Taoiseach is placing the government at odds with the Good Friday Agreement. On that point he does have something in common with Boris Johnson.

When questioned on how a non-position on unity fitted with the “Republican Party” he likened it to the policy of Seán Lemass - but with money; a policy from 1959 that turned a blind eye the to the rights of citizens in the north, which was a single party state sustained by repressive legislation and discrimination. This is no longer 1959.

The Orange State and a unionist veto has gone. A new Ireland has emerged, and a generation has grown up with the promise of a peaceful and democratic pathway to Irish Unity.

Speaking following the Taoiseach's event, Sinn Féin President Mary Lou McDonald TD said, "The truth is that any conversation about the future of our island and the Good Friday Agreement must address preparing for a unity referendum."

"It is undeniable that the challenges of Covid-19 and Brexit have crystalised the folly and unsustainability of the partition of our island. It is clear to anyone paying attention that there is a growing momentum towards the unity of the country and the conversation about a United Ireland is happening across the island."

"People are re-considering long held views and looking at the possibility and potential of a United Ireland to deliver a better future for us all. Change is happening. There is no value to be found in the Taoiseach and his government failing to recognise that reality and standing against the tide of this change."

The idea of Taoiseach trying to make a virtue out of refusing to plan for unity is unsustainable.

History is littered with Irish governments that refused to plan for unity. They are the past.

We need an Irish government to be promoters, planners and persuaders for a United Ireland.

We need an Irish government to realise the transformative potential of the Good Friday Agreement.

Above all, we need an Irish government that values the democratic principle of letting the people have their say in a unity referendum.

Today, we got a Taoiseach that is proud to have no plan and no opinion.