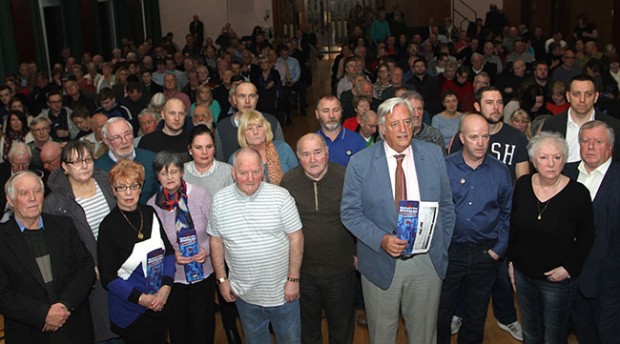 An updated report into the McGurk's Bar bombing in Belfast in 1971 reveals further evidence of RUC and British army cover up and state collusion in the loyalist killing of 15 people.

The McGurk's Bar Bombing Post-Script, released on Thursday October 8, furthers the families campaign to expose the role played by the RUC and British army in the cover up of the UVF attack and the extent to which British Government and its security services perpetuated the lie that the IRA was responsible for the explosion.

Ciarán MacAirt, whose grandmother Kathleen Irvine was killed and his grandfather John injured in the bomb raid, has through the investigative Paper Trail charity, which he founded, uncovered official British Ministry of Defence (MoD) documents, which point to a deliberate campaign by the British authorities to peddle the lie that the IRA left the explosives in the bar which subsequently detonated prematurely.

MacAirt told An Phoblacht, “The British state allowed the real perpetuators to escape and these extremists killed many more civilians in the years afterwards”.

Despite the evidence of eye-witnesses and a British army explosives export supporting the claims that a loyalist bomb team left the bomb in the doorway of the bar the British military and political establishment stonewalled the families attempts to find the truth.

Indeed a British army Ammunition Technical Officer (ATO) had informed General Sir Harry Tuzo, the most senior British officer in the north at the time, within 12 hours of the attack, that the device was left in the doorway of the premises thus substantiating eye-witness accounts. This went contrary to the 'official' press briefings issued by the RUC and was mothballed until MacAirt uncovered the official British army log dated the morning after the massacre.

Elsewhere in the updated report, also based on secret Britsh army documents, MacAirt reveals that despite their continued denials the British army had a covert operation, possibly involving the Military Reaction Force (MRF), in place near the pub at the time and also the British army recorded the escape of the suspect car within minutes of the explosion.

At no time did the British army or RUC attempt to intercept the suspicious vehicle which was reported outside the York Street RUC barracks before the explosion and which drove along the same road after the attack.

As importantly for the families as the exposure of the role played by the British state in covering up the details of the attack is the context within which it occurred.

As the British government tried to get to grips with rising tide of nationalist and republican dissent and anger, particularly in the aftermath of the introduction of internment in August 1971, its response was typical of its tried and trusted counter-insurgency methods employed in colonial wars across the globe. In the period leading up to and after internment was brought in, the British army killed 23 people across the North, mostly in Belfast.

At the centre of the counter-insurgency was General Frank Kitson and the development of his 'counter-gang' strategy built around undercover killer gangs such as the MRF.

Speaking at the launch of the updated report solicitor Niall Ó Murchú of Kinnear and Co. solicitors castigated the both the Police Ombudsman's Office and the Historical Enquiries Team (HET) over their failure to pursue the various state agencies involved and uncover the information pieced together by MacAirt.

In 2010 the families dismissed out of hand a report published by the then Police Ombudsman Al Hutchinson. His subsequent report, published in February 2011, accused the RUC of “investigative bias”.

In response, the then PSNI Chief Constable Matt Baggot said further prosecutions were unlikely, saying: “It is my view that there appear to be no further investigative opportunities available.” The families saw this as the ‘RUC old guard’ within the PSNI closing the door in their faces.

To add to the families’ frustration, a 2015 report by the now-defunct Historical Enquiries Team (HET) contradicted the Ombudsman’s assessment, saying that, in its view, there was no evidence of bias in the original RUC probe.

Angry at this state of affairs, the families are now challenging current PSNI Chief Constable George Hamilton to reopen the investigation. “The cover up continues” said Ó Murchú before going on to indicate that “the families will be forced back into court to seek an independent investigation nearly half a century after the murder of their loved ones by agents of the British state”.