"The Tory ideologues running this particular British government are treating the north of Ireland and our peace process like some form of commodity. Nothing it says or does can be taken on trust. That is our lived experience." - Declan Kearney

The European Union (EU) is a rules and treaty-based organisation.

It functions according to procedure and precedent.

In that sense it is a predictable body.

It is accustomed to managing inter state-relations and complex negotiations.

Of course, from a progressive left perspective there is much which needs to be reformed in the EU with reference to how decisions are made and business is done within its institutions.

But it is a considerable economic and trading bloc on the world stage with a single market of 27 member states and almost 500 consumers.

And it does represent a significant geopolitical influence in terms of international relations.

It has also been a key stakeholder in helping to create and cement the Irish peace process. 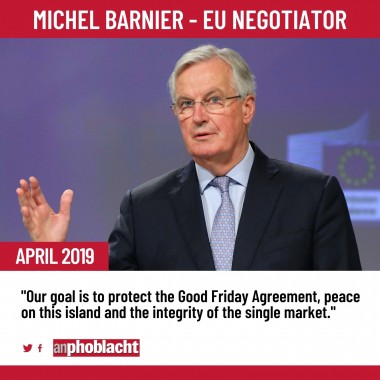 The EU has consistently supported implementation of the Good Friday Agreement (GFA), and recognised the importance of the all-island economy, which has flourished since peace was secured.

The British state joined the European Economic Community in 1973. It has been one of the most significant actors within the EU’s institutions since that time.

It is inconceivable that with such cumulative institutional experience, British negotiators did not comprehend the totality of all these factors when they began negotiations to leave the EU after the Brexit referendum in June 2016.

On the contrary, the British negotiators and successive Tory governments with direct oversight, commenced those talks with the EU with their eyes wide open.

Theresa May’s administration knew exactly what it had agreed with the ‘Backstop’ outcome in 2018: But she then fell foul of the rebellion spearheaded by a cabal of ‘little Englander’ right-wing ideologues to be replaced with Boris Johnson.

His government then started a new negotiation which resulted in the Withdrawal Agreement, into which the EU negotiated the Irish Protocol. It was effectively a variation of the original ‘Backstop’. 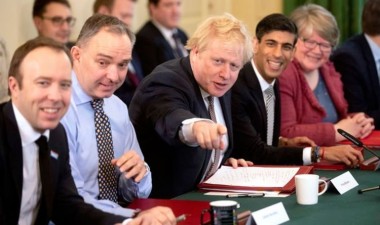 Yet the ink was scarcely dry on the Withdrawal Agreement and Irish Protocol, when the ideological core group controlling strategy and policy in the Johnson government, and also emboldened by a general election landslide in December 2019, began to push back against the agreed terms of Britain’s exit from Europe.

In defiance of all established rules and conventions this group decided to upend what was already agreed in an attempt to force a renegotiation towards securing a trade deal on its terms with the EU.

And, this is what the last ten months of 2020 have been about.

The EU has called for full implementation of the Withdrawal Agreement and Irish Protocol during the extant 12-month transition, while the British have pressed for a renegotiation.

There is a direct collision between the ideological ‘push back’ against the EU by the core team directing this Tory government, and the settled position of the 27 other states. That is what sits at the crux of the current Withdrawal Agreement negotiations impasse.

The present stand-off with the EU sits within a broader context. This group’s focus is not only on getting Britain out of Europe. It wants to reorder the British state and British society to suit the economic, fiscal and political priorities of a full blown neoliberal agenda.

From the transition period began in January 2020, the British approach has consistently put it up to the EU negotiators.

In June the Tory government made clear that, notwithstanding the increasing levels of support for remaining in the EU in both the north of Ireland and Scotland, and challenge posed by the global Coronavirus emergency, it would not seek an extension of this transition period.

Since then, and in an acknowledged breach of international law, the British government has now introduced the Internal Market Bill in Westminster. This has upped the ante in the negotiations and caused international furore within the EU and USA. 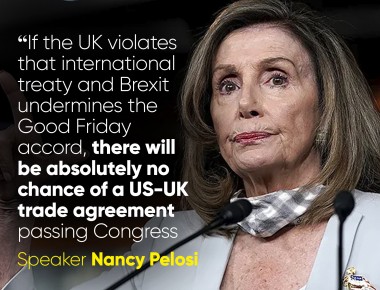 Boris Johnson then issued another ultimatum saying if there’s no deal on trade by 15th October, one will not be done at all.

As I explained on 29th September to Mike Mulvaney, the US Government envoy to the north, it is impossible to predict whether there will be a crash-out Brexit or not, given the ideologically driven approach of the British in their negotiations with the EU.

But time is fast running out.

Michel Barnier the EU chief negotiator pointed this out the previous day at the Joint Committee on EU Withdrawal. He told the British they still had time to show good faith, meet their obligations and commitment to complete implementation of the Irish Protocol.

The European Commission Vice President Maroš Ševčovič who led the EU delegation during this meeting was emphatic once again that the British have provided insufficient detail and not made enough progress in the talks.

He pulled no punches and warned the British that the Internal Market Bill was an extremely serious violation of the Withdrawal Agreement and the Irish Protocol; and that the EU will not tolerate any unilateral moves against or a renegotiation of the existing international treaty which is the Agreement.

Michael Gove, who led the British delegation, sought to justify his government’s actions and negotiation stance by saying that the provisions of the Bill would only come into force as a last resort in the trade negotiations. He then added that it commanded the support of a majority in his parliament.

I made clear in response that the Internal Market Bill has already been rejected by a majority in our own assembly in the north and was opposed by the great majority of all parties in northern and Southern Ireland. 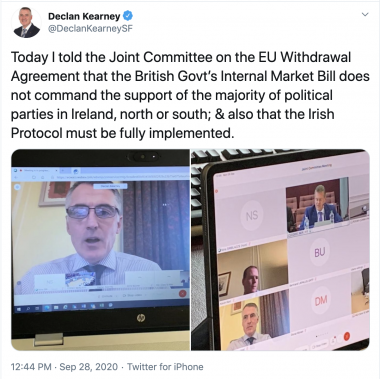 Moreover, the regional administrations in Scotland and Wales have described the Internal Market Bill as a full frontal assault on their devolution settlements, and a de facto power grab by London.

The most recent Joint Committee meeting was the latest evidence that the ideologues running the British cabinet are ‘playing chicken’ with the EU in order to get what they want: That is to become a maximised deregulated free market competitor on the border of the EU, enjoying uniquely privileged non membership access to the single market, while carrying neither responsibility or cost.

This sort of negotiation stance is a complete anathema to the EU.

But in the process of trying to get a trade deal on their own bespoke terms the Tories are also creating huge instability and uncertainty for businesses here in Ireland.

If the British do in fact leave the EU without a trade deal on 31st December this year there will be massive repercussions for jobs, trade and economic stability in Ireland, both north and south.

The interests of Irish businesses do not feature in the calculations of the British negotiators because the primacy of full deregulation for English economic interests trumps other considerations.

To borrow a phrase this is about trying to ‘make England great again’.

At the same time, the Internal Market Bill, despite attempts by the Tories to say otherwise, opens the potential for serious political instability by disapplying critical sections of the Withdrawal Agreement itself and the Irish Protocol.

This has far reaching implications for the protection of the GFA, North-South cooperation and the all-island economy. 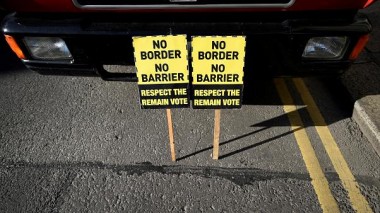 Hence the outcry provoked from not only in the EU, (which has now decided to take legal action against Britain), and the vocal opposition of Irish civic and political opinion, but also criticism by notable figures in the British establishment, including a scathing rebuke from the House of Lords Constitution Committee, in a letter issued to key figures in the British cabinet.

As I told the north of Ireland Assembly’s Executive Office Scrutiny Committee two weeks ago there is no good Brexit, but at least the Irish Protocol enshrines minimum guarantees for our businesses and citizens’ rights.

However, the narrow and reckless ideological motivations of those driving Britain’s Brexit agenda don’t care about Ireland or the welfare of Irish businesses, our citizens’ rights, or indeed our political stability.

The Tories in charge of England today have no affinity for European solidarity or the importance of multilateralism. Nor have they any investment in the Irish peace process. 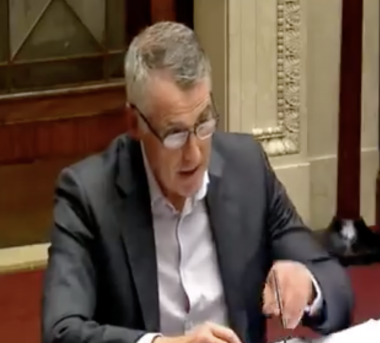 Since 2010 successive Tory governments, including the current cabinet run by Boris Johnson’s ideologues, have negatively mismanaged both the peace and political processes.

They have played fast and loose with the Good Friday Agreement and other Agreements upon which our hard-won peace has been built.

In short, the Tory ideologues running this particular British government are treating the north of Ireland and our peace process like some form of commodity. Nothing it says or does can be taken on trust. That is our lived experience.

What is now at stake is the political and economic progress which has been enjoyed across the whole island of Ireland.

That is why the solidarity and resolve of the EU must be maintained, and why the considerable international support for the GFA and a sustainable peace in Ireland is more important than ever.