A tall tale on shaky foundations 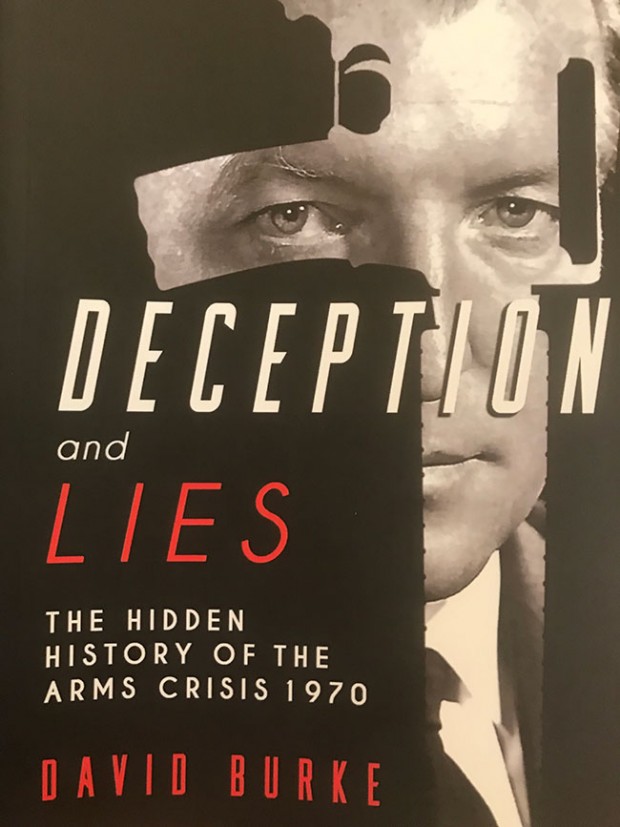 ‘Deception and Lies – the Hidden History of the Arms Crisis 1970’

The 50th anniversary of the Arms Crisis of 1970 has seen it firmly established once and for all as historical truth that the plan to import arms that year was fully approved by the Fianna Fáil government, including Taoiseach Jack Lynch and Defence Minister Jim Gibbons, that it was to provide defence for nationalists in the Six Counties in the event of a threatened repetition of the pogrom of 1969 or worse, and that it was not a plot by Charles Haughey and Neil Blaney to aid the IRA and oust Lynch.

The jury in the Arms Trial 50 years ago came to that conclusion and acquitted Haughey, Captain James Kelly, John Kelly and Albert Luykx. Why was that verdict never accepted by so much of the political and media establishment in the 26 Counties and why was the myth preferred? The answer is that they wished to close down solidarity and support for nationalists in the Six Counties and to avoid confrontation with the British government at all costs, and to protect their own political dominance. Their every action supports this view – repressive legislation, harassment and jailing of republicans, political censorship, the anti-nationalist ‘revision’ of history, and the craven attitude to the British government adopted by Jack Lynch. Anyone who doubts the latter need only read the cringe-making transcript of the phone conversation between Lynch and British Prime Minister Ted Heath in the wake of Derry’s Bloody Sunday, as well as his little chats with the British ambassador, including naming Irish judges that he thought were too sympathetic to republicans. All of this has been released from the archives in recent years.

Michael Heney’s book ‘The Arms Crisis of 1970 – the Plot that Never Was’ (reviewed in An Phoblacht here https://www.anphoblacht.com/contents/27925) put the final nail in the coffin of the myth and forensically and thoroughly set out the facts. But then, when the waters are clear, along comes another book to muddy them. In stark contrast to Heney’s work, David Burke’s ‘Deception and Lies – the Hidden History of the Arms Crisis 1970’ is full of speculation and guesswork and its central thesis is highly questionable to say the least. That said, and before going further, it must be stated that Burke fully accepts that the importation was a Government approved operation, that the defendants in the trial were innocent, that Captain James Kelly in particular was scape-goated and that the notion that Haughey et al helped to establish the ‘Provisional’ IRA is another myth originally perpetrated by Cathal Goulding’s ‘Official’ IRA. 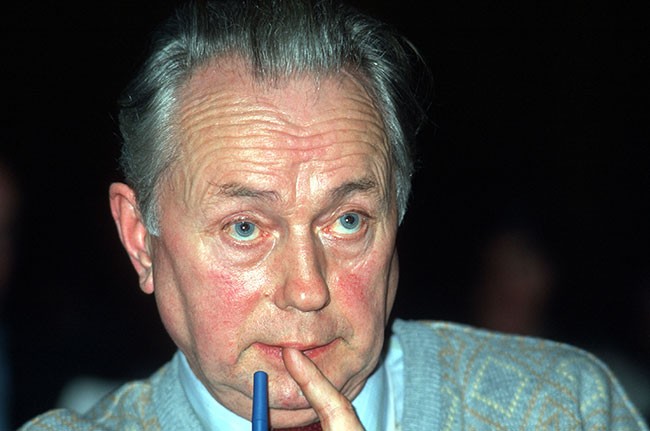 However, the core of the book, and Burke’s alleged ‘scoop’, is the claim that the founder and first Chief of Staff of the Provisional IRA Army Council, Seán Mac Stíofáin, deceived the Garda Special Branch for several years into thinking he was supplying them with reliable information while actually feeding them false leads. The author alleges that Mac Stíofáin was an arch-conspirator who stirred up the Arms Crisis by successfully convincing his Garda contact that Neil Blaney and Charlie Haughey were illegally importing arms for the ‘Official’ IRA . Mac Stíofáin’s supposed motivation was to discredit Goulding and to destabilise the Fianna Fáil government.

This tallest of tales rests on very shaky foundations, that is, solely on the word of former Garda Special Branch men and other unnamed sources. The quality of the sources is shown when Burke refers to alleged information from an anonymous retired Special Branch man and then in the foot note we read: “Unfortunately, I have not spoken to this individual. When I asked a retired special branch officer who knew him if he might be prepared to divulge some details about his experience, I was told that ‘he wouldn’t even talk to himself’ about The Deceiver.”

The author uses the silly theatrical device of referring to Mac Stíofáin throughout most of the book as ‘The Deceiver’ before, near the end, dramatically (he hopes) ‘revealing’ his true identity. But the effort to present him as an evil genius single-handedly manipulating the situation to create the Arms Crisis simply falls flat for lack of credible evidence. We are expected to believe that Mac Stíofáin, having just led the split from Goulding’s leadership, and trying to reorganise the IRA under the Provisional Army Council, while also trying to get arms to the Six Counties to defend beleaguered nationalists, was at the same time engaged in a convoluted plot, the effect of which would be to prevent arms going North! Credibility is stretched to breaking point. 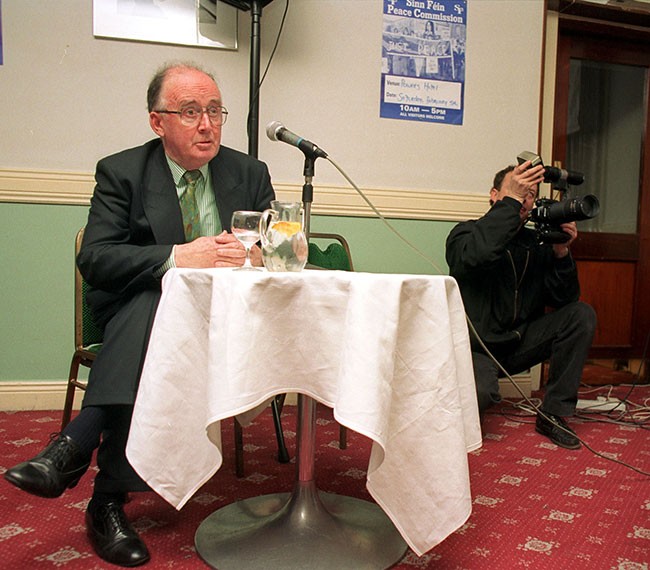 But even if you were to accept Burke’s claim that Mac Stíofáin was a double agent numerous questions arise. Was he the main source of Garda information on the arms importation? The author claims there were others, including an alleged Saor Éire informer. Why was there such suspicion and rivalry between the Garda Special Branch and G2 Army Intelligence? Accepting, as the author does, the well established fact that the arms importation plan was Government approved, known to Taoiseach Jack Lynch and overseen by Defence Minister Jim Gibbons, why, given the seriousness of the situation, did the Government not ensure that the Special Branch was on board?

The author mentions the fact that at least one Garda Special Branch man (Crinion) was working for the British intelligence agency MI6 and he and his handler (Wyman) were later exposed but never faced trial. Yet Burke never questions if this pair or other British intelligence agents might have had a role in either feeding false information about the arms importation to the Special Branch and their Justice Department boss Peter Berry or, even more ominously, encouraging or aiding existing Branch hostility to an arms importation plan which they knew to be Government-approved but wanted to thwart.

Wouldn’t it be in the interests of the Branch to place the blame for the whole debacle on Mac Stíofáin rather than to admit that they might have been manipulated by or, worse, were collaborating with British intelligence?

Burke is in danger of creating new myths. He states that “the principal difficulty in establishing the truth about the Arms Crisis lies in the fact that the gardai’s most prized IRA informer was a fraud who played a devious game with his handler”. Really? What about the cover-up by Lynch and Gibbons? The tampering with evidence by the prosecution in the trial? The demonization of Captain Kelly and others? The lie maintained for years by Garret Fitzgerald and others that that the jury was intimidated?

The Mac Stiofáin theory has been taken up eagerly by the likes of former Fianna Fáil TD Conor Lenihan who has said in a review in Village magazine that the Arms Crisis “was a crafty and opportunistic Provisional IRA dirty trick designed to throw Fianna Fáil into chaos”. Ulster Unionist Party Justice spokesperson Doug Beattie says the claim about Mac Stiofáin is “potentially the biggest scandal by far in terms of government complicity with paramilitaries” (‘Newsletter’, 25 September). You can see where this is going and no doubt Burke’s theory will be dragged out as a red herring whenever British crown forces’ collusion with loyalist paramilitaries is highlighted.

Finally, the author suggests that the late Captain Kelly was somehow ostracised by Sinn Féin in his later years. This is nonsense. I recall Captain Kelly speaking at anti-extradition meetings in the late 1980s and he remained on good terms with republicans, an honest, decent and principled man who worked long and successfully to finally vindicate his good name.