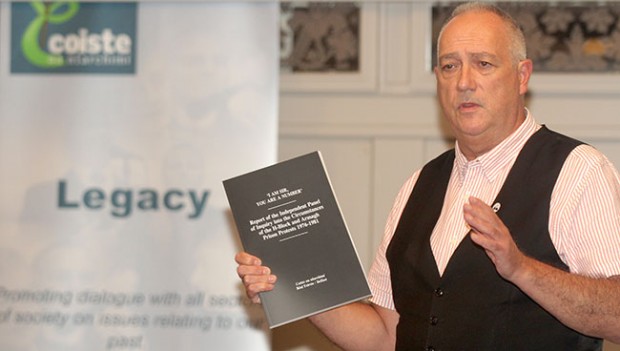 The systematic brutal and degrading treatment of republican protesting prisoners in the H Blocks of Long Kesh and Armagh women's prison has been exposed in a new report released today October 1.

The Independent Panel of Inquiry established in 2015 found that the regime operated in the H Blocks and Armagh between 1976 and 1981 was geared towards breaking the “protesters morale and solidarity” and out lined the methods used.

In Armagh these included the “punitive use of strip searching” against women POWs while in the H Blocks 'Blanketmen' were forced to endured degrading mirror searches. This entailed prisoners being spread-eagled over a mirror where they were subjected to a “body-cavity”.

The report which was commissioned by the Belfast based Coiste na nIarchimí was welcomed by the organisations director and former prisoner Michael Culbert.

Speaking to An Phoblacht Culbert cited the hard work of former Coiste member Séanna Walsh “who was the driving force behind this project but I want to especially pay tribute to the panelists whose independence and integrity gives this report the international standing and merit it deserves.

“The issue of legacy is very much to the fore of the political and media debate at present and it is the view of Coiste that the whole question of political imprisonment and particularly the situation in the H Blocks and Armagh and the 1981 Hunger Strike is part of that debate.

“Remember there were as many as 25,000 people from the republican/nationalist community who went through the various prison during the conflict. This issue effects very many people to this day”, he concluded.

The International Panel, which was established jointly by Coiste and Ó Muirigh Solicitors was originally chaired by former Canadian Solicitor General Warren Allmand who unfortunately died before the work was completed.

He was replaced by Professor Phil Scraton whose reputation as an advocacy of prisoners rights is well known. He was also heavily involved in the campaign for justice for the families of those Liverpool soccer fans killed at Hillsborough, England.

The other panellists included Richard Harvey who represented some of Derry's Bloody Sunday families and is well known in the area of human rights law and Dr John Burton, a retired family doctor and and researcher in human rights law.

The extent of the work which included gaining access to prisoners' files, preparation prisoners' testimonies and legislative research including trawling through myriad British government documents ensured the thoroughness of the work.

In an exhaustive process the panel held a series of local tribunals in venues across the North, solicitors took statements from former protesting prisoners.

In their endeavour to get as wide a geographical spread as possible, testimonies were collected from 75 Blanket and No Wash protesters in Belfast, Derry City, Gulladuff in South Derry, and in the Newry/South Armagh area.

Up to 10 women who were imprisoned in Armagh women’s jail also made statements, describing their treatment by the prison authorities as they protested for the right to be treated as political prisoners.

Focusing on the culpability and responsibility of the British government for the ill-treatment of the protesting prisoners Professor Phil Scraton, who edited the report, was clear that the evidence of the “transcripts of in-depth interviews with men and women former prisoners presented in this Report, [it] is evident they endured unacceptable levels of physical and psychological punishment, violence and violation.

“Administered purposefully, without the checks and balances of State institutional accountability, it constituted cruel, inhuman and degrading treatment within the UN General Assembly’s 1975 definition of torture.

“The report concludes that the treatment of prisoners was the consequence of a deliberate policy implemented by the UK Government whose institutions were fully aware that their policies and practices violated international human rights standards and breached common law and statute.

“The panel also concluded, based on all the evidence received, that the ultimate legal and moral responsibility for this level of inhumanity and degradation rested on successive Prime Ministers and their senior Cabinet Ministers who knew and approved of that treatment”.

Also commenting at the launch which took the form of a virtual event Séanna Walsh stated, “throughout the world people are familiar with the heroism of the 1981 H-Block Hunger Strikes. Not so well-known is the story of suffering and hardship which led to the tragedy of that fateful year.

“It has taken 39 years to bring together testimonies of that horror, honouring all who endured and survived.”