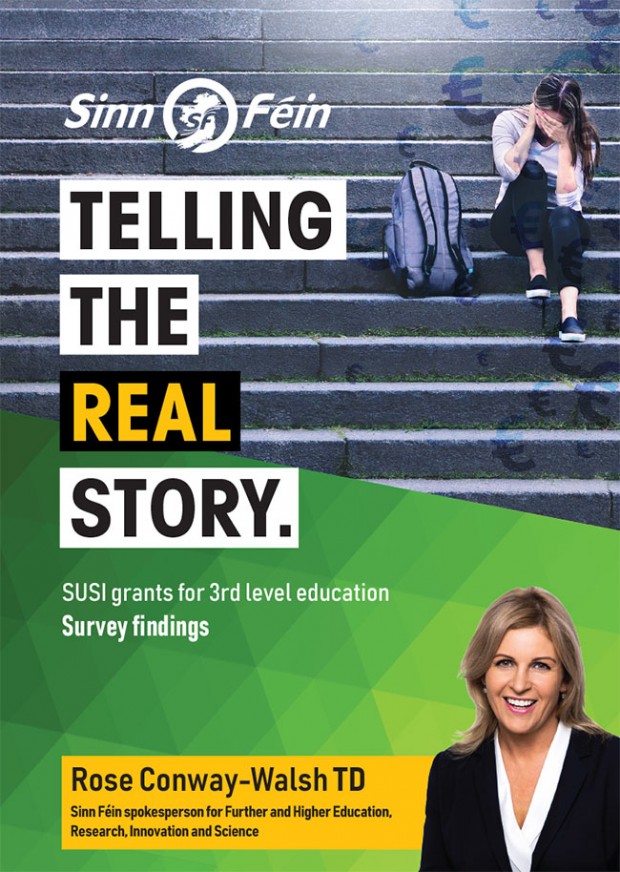 In August we asked third-level students and their families to tell their stories about accessing further and higher education. 1,022 students and many parents from throughout the country told us exactly how it is for them. It portrays a picture of anxiety, financial stress and economic and social exclusion.

The information gathered is deeply concerning. Uncertainty, accommodation affordability, loss of summer jobs, high fees and lack of career guidance have all collided to produce a perfect storm for third level education. Government must listen and introduce immediate measures to stop students dropping out of their courses or joining the unemployment queues.”

Over 80% of respondents tell us they are concerned or extremely concerned that they won’t have enough money to go to or remain at college. They then went on to tell us story after story of how the SUSI Grant System either excluded them or was not enough to cover the costs of their third-level education.

The voice of one student resonated with me when he said: “This is no country for the children of hard-working parents. I worry about my parent’s health. They work long hours, never take care of themselves and always put us first yet after all that, their son will most likely not be able to afford to attend third-level education.”

This student like many others is excluded because SUSI is assessed on Gross Income rather than Nett Income. The income tax, USC, PRSI as well as mortgage/rent payments the accommodation costs paid in the previous year all lumped in as if these households have this money available to meet the highest college fees in the EU, rent, food, travel, books, phone and other costs.

Government must make this a fairer system by calculating on Nett income and introducing flexibility to enable SUSI to respond to the real time financial situations of households. This is now more now more important than ever because over 50% of students tell us they have not been able to get work this summer.  They were counting on this work to pay for college.

Of all mature students refused a SUSI grant, over 24% was because they were assessed on their parent’s income. Another 23% did not apply because they knew their parent’s income was over the threshold. One student tells her story “I am a lone parent in my early thirties with a ten-year-old daughter. Last year I had to move back in with my parents because I could not afford the rent I was paying. I want to do a course at Sligo IT but have been refused SUSI based on my parent’s income. Without SUSI I cannot afford to go”. “The system must be changed so that mature students have their income assessed independently from their parents.

Uncertainty and affordability of accommodation featured heavily for the parents and students we spoke with. One parent outlined “My daughter is going to Mary I and my concern is that colleges need to let us know what their plan is for after Christmas. We are faced with accommodation charges of €6,000 for three weeks before Christmas. If after Christmas is the same i.e. one week per month then I will be paying €1,000 per week for only six weeks accommodation.”

The exclusion of part-time students and those doing on-line courses from SUSI was big concern particularly for parents of with teenagers with disabilities. A mother from Mayo wrote “I have four college age children, two in attendance and two highly intelligent autistic sons who cannot get SUSI to do on-line courses.  They should have a right to pursue their education like the other two.” Building flexibility into the system to enable people of all abilities to follow the pathways most suited to them is imperative.

“Almost 65% of students told us the SUSI grant is not adequate to meet costs associated with college. SUSI has not been increased since 2012. Even a 10% increase as called for by the USI could make all the difference.  This would require an investment of just over €16 million.

Sinn Féin believes in a higher and further education system that accessible to all regardless of where they live or their family circumstances.

I would sincerely like to thank all the students who completed the survey; the parents who contacted me and the Student Unions who helped to promote this survey. Their experiences and insights are invaluable to the work we are doing to bring about an All-Ireland fair education system that provides equality of opportunity and access.