"Increasingly the dynamics of Brexit and COVID-19 have fuelled the newly emergent debate on Irish unity. "The NSMC provides a practical framework for cooperation and action on an all island basis to address issues of common concern" - Declan Kearney

Although a regular visitor to Dublin I had never been inside Dublin Castle until 31 July past.

Historically the Castle is synonymous with British colonialism in Ireland.

One hundred years ago it was Britain’s main administrative base in Ireland; and it was also the nerve centre from which Nevil Mc Cready, Hugh Tudor and Ormond Winter ran their military and intelligence war against the IRA in Dublin and across Ireland.

It was a place which inspired both fear amongst, and directed acts of terror against, Irish citizens.

So as I walked over the cobbled stones covering the large courtyard/ parade ground in the middle of the Castle precinct, my mind was filled with these thoughts. 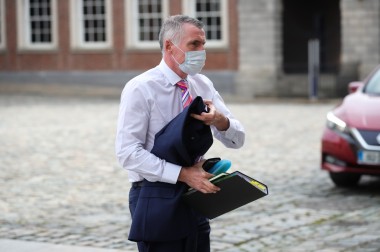 While there I asked to be shown the room where James Connolly (the socialist republican revolutionary and 1916 Rising leader) was brought badly wounded, the night before his execution by the British on 12 May 1916: It’s now known as the ‘Connolly Room’.

Many IRA volunteers, Sinn Féin, and other nationally minded activists were detained and interrogated in the Castle - notably among their numbers were Dublin IRA leaders Dick Mc Kee and Peadar Clancy, brought there in November 1920, who were later executed.

And yet, there was another side to the Castle.

Behind the scenes the IRA GHQ Intelligence Department led by Michael Collins ensured the Castle was effectively infiltrated during the 1919-21 Tan War.

One of the most renowned republican supporters employed at the Castle, Lily Mernin, provided huge amounts of decisive intelligence and information to the IRA. Another member of the clerical staff, Bernard Golden was a serving volunteer.

Some of the IRA’s most important agents were policemen.

At one point Collins and his comrades were simultaneously running four key policemen.

The IRA’s most important police spy in Dublin was Head Constable Peter Forlan, who was based in the Castle.

So although Dublin Castle was indeed a cutting edge of Britain’s then war in Ireland, the IRA turned this into a counter intelligence advantage to bolster the armed struggle.

Now on the occasion of my visit, Dublin Castle was hosting the first plenary meeting of the North South Ministerial Council (NSMC) to convene in over three and a half years.

The NSMC is an integral component of the the Good Friday Agreement(GFA).

It is the institutional expression for the management of all Ireland relations on a north/south basis: otherwise described as Strand 2.

Very importantly the GFA states that the NSMC would be established “to bring together those with Executive responsibilities in Northern Ireland and the Irish Government, to develop consultation, cooperation and action within the island of Ireland - including through implementation on an all-island cross border basis - on matters of mutual interest within the competence of the Administrations, North and South”

The content of Section 1 forms the crux of the mission statement for a permanent joint secretariat which administers the work of the NSMC.

The existence and proper functioning of the NSMC is central to the operation of the power sharing government and regional Assembly in the north.

Section 13 of the GFA’s Strand 2 text makes explicit the NSMC and power sharing Assembly are interdependent, and that one cannot successfully function without the other.

In other words, the Strand 1, regional political arrangements for the north, can only function in the context of an active all Ireland political framework, as provided under Strand 2.

The recent political crisis in the north of Ireland triggered by a major financial scandal in government, and simultaneous denial of fundamental rights to citizens, culminated in a collapse of the power sharing administration in 2017. 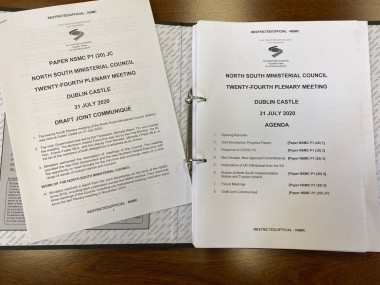 As a result the NSMC did not convene while the power sharing government and assembly remained collapsed between January 2017 and January of this year.

A period of protracted government formation talks then followed the general election in the south of Ireland in February.

Protocol required that responsibility for the next scheduled plenary meeting of the NSMC would fall to the new Irish coalition government.

So on 31 July, government ministers from both administrations north and south convened to discuss the COVID-19 health emergency; commitments to be implemented under the New Decade New Approach document (which formed the basis for restoring the power sharing government in the North in January); and, also Britain’s withdrawal from the EU and implications for EU/ Ireland/ Britain relations.

All major political parties either organised on an all Ireland basis, such as Sinn Féin, or separately in both the northern and southern states, now have government ministers in coalition administrations across both jurisdictions.

This particular NSMC plenary meeting was also important as a demonstration of renewed stability within the political and peace processes.

So it was a good day for power sharing and for the peace process.

However, it was also a very important day to illustrate all Ireland politics in action.

The repercussions of Brexit and COVID-19 have changed the reality of life for everyone, north and south.

Both issues have brought sharply into focus the need for coordination of all island approaches on economic and public health policies.

Increasingly the dynamics of Brexit and COVID-19 have fuelled the newly emergent debate on Irish unity.

The NSMC provides a practical framework for cooperation and action on an all island basis to address issues of common concern.

Earlier this year the health ministers based respectively in Belfast and Dublin agreed a Memorandum of Understanding on how to jointly tackle Coronavirus. This now needs strengthened and improved particularly with regard to managing travel information on and off the island, and in relation to monitoring community transmission and operating contact tracing island wide.

Where it has been possible, both administrations have sought to coordinate the implementation and lifting of Coronavirus regulations and restrictions.

All Ireland cooperation and action is not a constitutional issue, it makes common sense.

The NSMC facilitates ministerial engagement in plenary format, as well as sectoral, and also institutional formats.

In addition, six north/south implementation bodies exist with a competence for joint cooperation on waterways; food safety; trade and business; European funding; languages; and a loughs agency. All island tourism promotion is addressed through a body called Tourism Ireland.

The North West Cancer Centre in Derry, and Paediatric Cardiology Service in Dublin are pioneering and crucial examples of north/south cooperation in the sphere of public health. 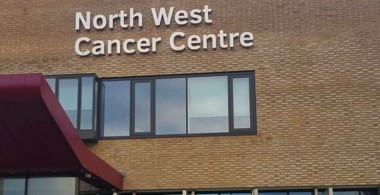 And, there is still scope for greater expansion in areas such as third level education, and other policy spheres.

The excellent joint working between neighbouring local government structures on either side of the border, can be further built upon.

One existing model of practical cross border collaboration between councils is the North West Strategic Council Partnership, an umbrella body which brings together Donegal and Derry/Strabane Councils with relevant government departments based north and south.

Its work is informed and acted upon by North West Regional Development Group, comprising the elected members and officials of both councils, and with a remit for regional economic growth, physical development, and community and social well being.

The NSMC does not merely institutionalise all Ireland cooperation on public policy,  it also normalises the logic and need for cross border action.

None of that should pose any threat to unionists.

Brexit has swept away all of the old constitutional, political and economic assumptions.

COVID-19 does not recognise or respect borders, nor contested political allegiances.

All Ireland working for the welfare of our people is not a stealth agenda, it just makes good common sense.

The GFA and NSMC are the frameworks for how all of this can be progressed.

And they also provide the mechanisms to manage constitutional change and political transition, and to facilitate a democratic, inclusive discussion about our shared future on this island.

These are opportunities which need to be positively built upon by all political parties and sections of society.

There is nothing inevitable about Irish unity, it’s achievement depends upon continued political realignment, and democratic persuasion.

It also requires this recently formed Irish government to act.

The new coalition government in Dublin should bring forward a green paper on reunification and establish a special joint Oireachtas committee on Irish unity.

Brexit has fundamentally changed British and Irish relations, and it is time for the current British government to adjust to that reality.

All of this coincides with the latest opinion poll in the south which put Sinn Féin ahead of both Fine Gael and Fianna Fáil.

Although the poll is consistent with a strong trend of Sinn Féin support since February’s general election, nothing should be taken for granted. 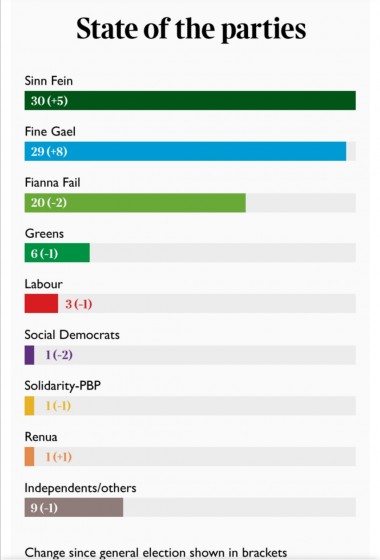 All opinion polls are just snap shots in time.

Nonetheless, and for the time being, these trends are positive, and can bode well for the future, if the Party continues to do the right things.

However, the paramount strategic issue for Sinn Féin activists is to consistently maintain an all Ireland focus.

All programmes of Party activism, whether as lead party of opposition in the south, or a party of government in the north, need set into the broader strategic context of this continuing national liberation phase of democratic change in Ireland.

Ensuring consistency of focus and managing the associated contradictions will pose significant challenges, as well as opportunities for modern day republicans.

The hazard of slipping into silos while managing government and opposition at the same time will need to be carefully avoided.

So, too must the perils of institutionalism and partitionism.

Dealing with the realities of being in government and opposition in two distinct jurisdictions will always be complex.

The demands of each could in fact, if allowed, become all consuming.

Even though the function of government and opposition constitute separate sites of political struggle, these need to be made to deliver maximum change in the here and now, on behalf of those in Irish society who rely upon Sinn Féin to represent their community and class interests.

The strategic glue connecting this together is the implementation and expansion of all Ireland politics: And alongside that, developing progressive, pro independence alliances; encouraging the Irish unity debate; and, securing and winning a unity referendum.

Sinn Féin cannot, and will not achieve this ambitious agenda on it’s own, but our Party is an engine to bring about these conditions, with the help of others, both domestically and internationally.

Mobilising popular support for republican democratic objectives, and using the political strength of Sinn Féin as a Party of government, eventually in both the north and south, will be instrumental for unlocking the potential of Irish unity.

In the future more days at Dublin Castle, and elsewhere, will be needed to ensure the role of the NSMC is fully developed, and that power sharing in the north continues to work properly;

and ultimately, that the Irish peace process continues the democratic transformation of Irish society.