Remembering the Past – Kevin Lynch and Kieran Doherty laid to rest 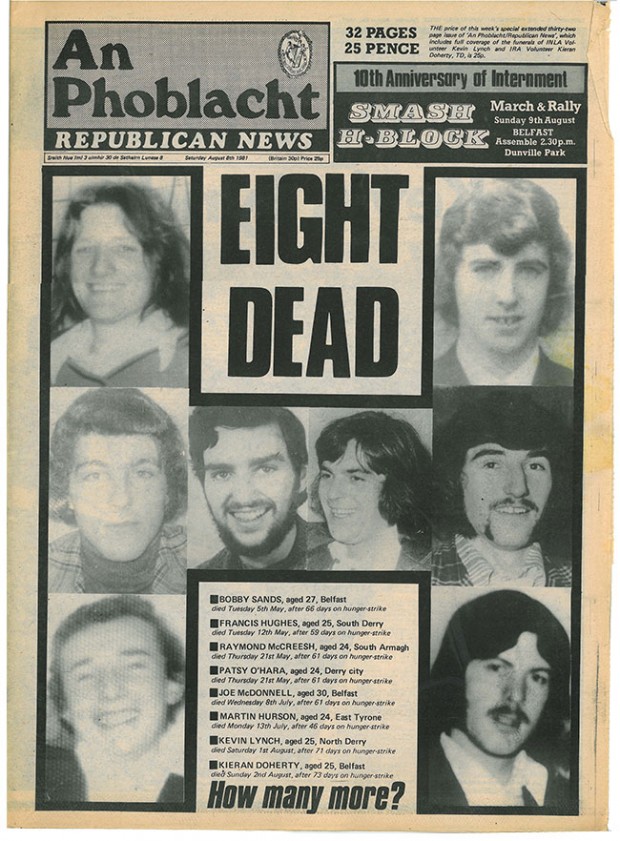 Below we republish the funeral reports of both volunteers from 1981. They were reprinted in a 2006 issue of IRIS. 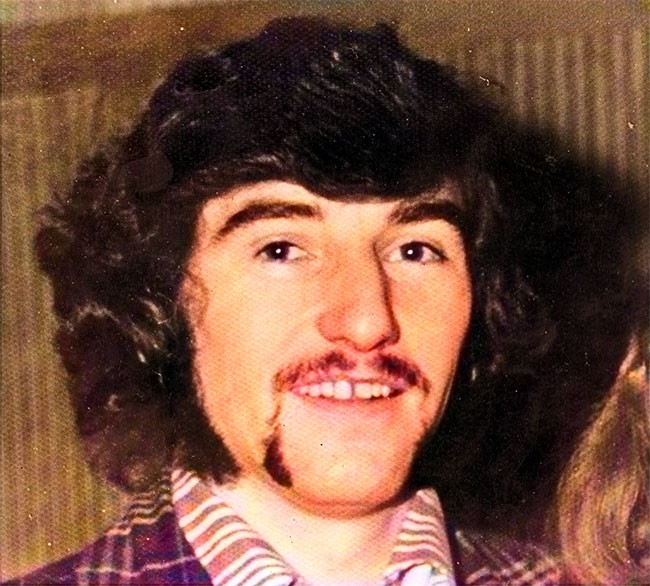 The death of INLA Volunteer Kevin Lynch after seventy-one days on hunger strike occurred on 1 August 1981, followed the next day by that of IRA Volunteer Kieran Doherty. They were the seventh and eighth men, respectively, to die on the fast.

Kevin had been lapsing into frequent periods of unconsciousness in the last four days, having already lost his sight, hearing and speech. His family were at his bedside throughout the final days until he died in the early hours of Saturday morning.

His funeral took place the following Monday, in his home town of Dungiven in County Derry. Between the return of his body to his home and the removal for Requiem Mass on Monday afternoon, a constant stream of mourners queued out-side to pay their respects. The road was decorated with Tricolours and black flags, along with posters of Kevin Lynch. The RUC and the UDR made every effort to disrupt the funeral, holding up cars and forcing buses to park outside of town so that the passengers would have to make their way on foot. Ulsterbus in Belfast cancelled bookings at the last minute. Nevertheless, mourners came in convoys of cars and black taxis. At midday the coffin, bearing the Tricolour, Starry Plough, gloves and beret, was carried to the near-by church. The procession was led by a lone piper, followed by the Lynch family, relatives of other hunger strikers, and senior representatives of the IRSP and the broad Republican Movement, along with the National H-Block/Armagh Committee. 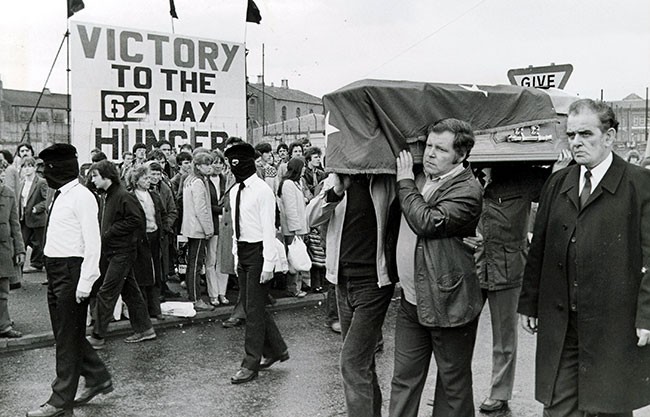 Five British Army helicopters flew overhead as the coffin entered the church grounds. Applause broke out momentarily as an eighteen-strong INLA guard of hon-our marched up to escort the coffin to the church door. The priest who celebrated the Mass, Fr John Quinn, expressed out-rage later when the INLA Volunteers escorting the coffin fired three volleys after it had left the church. So enraged was he that he refused to wear his vestments at the graveside. This same priest had failed to refer to the suffering of the hunger strikers themselves and failed also to condemn British intransigence. He also tried to imply that the family had been opposed to the military funeral - an opin-ion later refuted by family members, who criticised the press and those who had made unsolicited comments on their behalf. At the graveside, the piper played I’ll Wear No Convict’s Uniform. The Last Post was also played and wreaths were laid, including ones from both the INLA and IRA Army Councils.

A uniformed Volunteer then read a statement on behalf of the INLA Army Council, stating regret at Kevin’s death and applauding his heroism. “Kevin Lynch has made the greatest sacrifice, and he has done it in the face of the repressive machinery of British imperialism and in the wake of the greatest gesture of defiance against those who control the prisons and those who rule and ravage our country.” 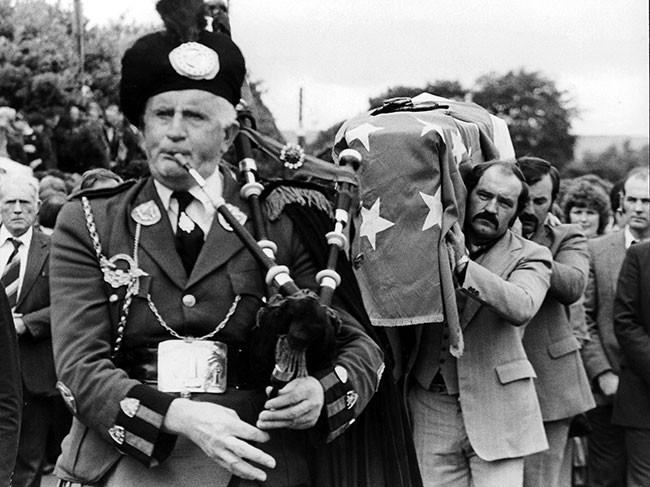 A lone piper led the cortege

A short oration was given by Councillor Seán Flynn from Belfast, Vice Chair of the IRSP:

“Kevin epitomised all that is good in a young Irishman, playing our national sports of hurling and football. He excelled at both, and in 1972 captained his native county to win an All-Ireland medal at hurling.”

He went on to contrast Lynch’s Gaelic spirit with the performance of the Gaelic Athletic Association leadership off the field. “Yesterday the Derry County Board and South Antrim County Board asked for a minute’s silence before the All-Ireland hurling semi-final between Limerick and Galway. It was no surprise to me when Croke Park refused. President MacFloinn last week declared that no clubs, grounds or units were to be used for H-Block activity, as it contravenes rule 7.” He added that work would be done to encourage support for the Five Demands amongst the GAA.

On Kevin’s courage and determination, Seán said, “It must be remembered that if Kevin had conformed to the British authority he would be a free man today; but to Kevin, Kieran Doherty, Patsy O’Hara, Bobby Sands, Francis Hughes, Raymond McCreesh, Joe McDonnell, Martin Hurson and the continuing hunger strikers, they knew if the political prisoners were criminalised then the British Government would attempt to criminalise the struggle on the outside.” He added that Kevin Lynch knew the consequences of going on hunger strike. “Deprived of every other means of defending his political integrity, he defended it with his life. Those who imply that he might have been ordered to do so, or could be ordered to cease to do so, fail to understand the depths or the personal integrity, the individual courage and the dedication to the principles he believed in, that made Kevin Lynch the person he was.” 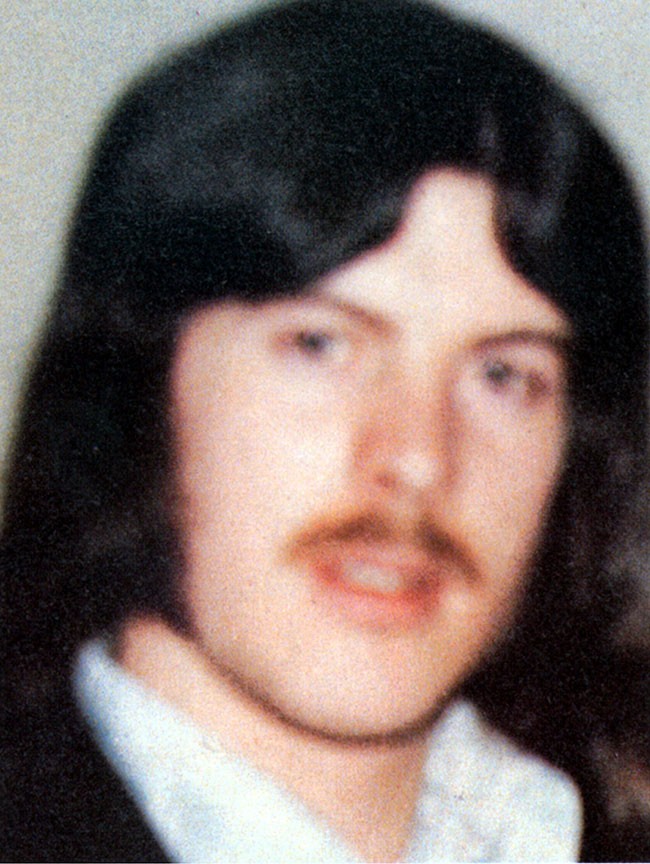 IRA Volunteer Kieran Doherty, TD for Cavan-Monaghan, died at 7.15pm on Sunday, 2 August, the day after Kevin Lynch’s death. Kieran had joined the hunger strike one day before Kevin Lynch and survived a day longer.

Kieran Doherty embarked on his fast upon the death of Raymond McCreesh. He managed, with difficulty, to speak to his family almost to the end, though his sight had almost completely gone. Kieran, or Big Doc as his comrades affectionately called him, had a strong spirit of survival which kept him conscious for most of his 73 days on hunger strike.

Kieran’s body was brought out of Long Kesh and through Andersonstown to his parents’ home in Commedagh Drive at two o’clock in the morning. About a thousand mourners accompanied the coffin and even larger crowds came out on Monday morning to pay their respects. The next day, hundreds of stewards took position on the funeral route as Kieran’s coffin was carried out of his parents’ house, escorted by an IRA guard of honour. An IRA firing party came out of the crowd and, lining the side of the coffin, fired a volley of shots. As British Army helicopters hovered overhead, the crowd cheered at the Brits’ inability to prevent the firing party from honouring their dead comrade. 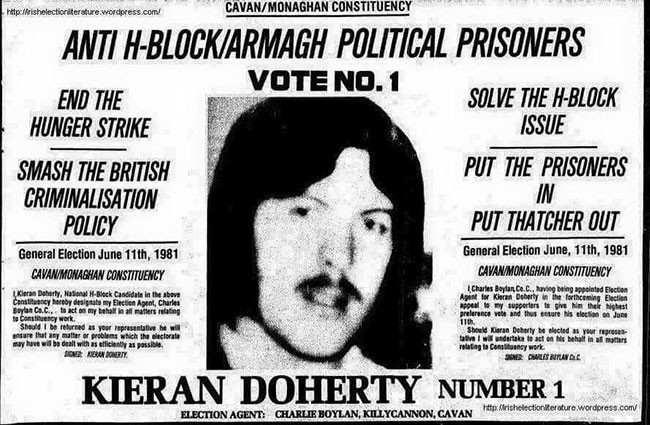 The cortege then moved through Andersonstown, led by two pipers. It will be recalled that during the hunger strike some of the clergy had set out to undermine the prisoners’ protest. In contrast to the attitude of the priest celebrating Mass at Kevin Lynch’s funeral, Fr Hansen’s sermon demonstrated a fundamental understanding of the issues at the core of the hunger strikers’ protest. While the presiding priest at the Lynch funeral refused to wear his vestments at the graveside because of the presence of a firing party, the priest at Kieran’s funeral recalled having visited Doherty on the 13th day of his fast and remembered it to be a cheerful event. He went on to recount Kieran’s words when he asked him if he would consider coming off the hunger strike. Kieran replied: “Look, Father, I could not give up. If I did I would go back to criminal status. I am not a criminal. I never was and never will be one.” Recalling those words at the funeral of Kieran Doherty, the priest said, “Basically, I had to agree with him.” He finished off by saying that “Kieran was very much his own man. He died quietly and very determined, serene and dignified.” Fr Toner, who was criticised by Bobby Sands in his diary, was in the congregation, listening but apparently unmoved by Fr Hansen’s words.

It was estimated that a crowd of about 20,000 attended Kieran’s funeral. Chairing the event, Sinn Féin member Jimmy Drumm referred to the ongoing pursuit of the Five Demands. “The British Government needs to be moved on the issues of work, association and segregation.” He finished by saying that with the basis of a just settlement “then we and the families will be spared the anguish and suffering of such funerals as this, and the prisoners who have suffered so much will be able to live in tolerable conditions.” Kieran Doherty was the eighth man to die on hunger strike in 1981 and two more would follow. 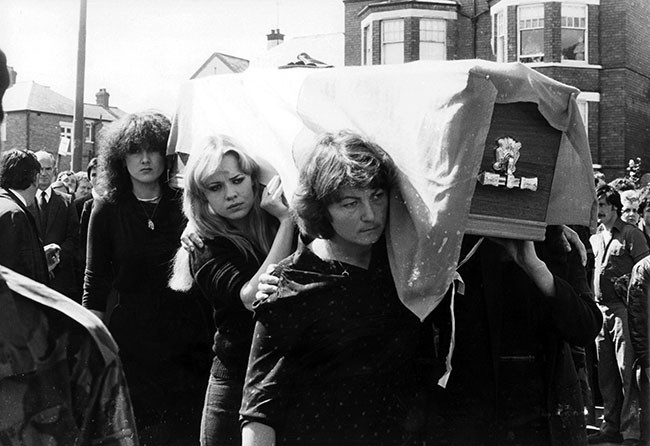 The oration at Volunteer Doherty’s funeral was given by Caoimhghín Ó Caoláin, Kieran’s Director of Elections during the 1981 general election. Ó Caoláin said that the people of Cavan-Monaghan had taken the 26-year-old to their hearts and that they were proud to elect him as their public representative. Ó Caoláin criticised the Irish Government’s handling of the hunger strike, saying, “Their gamesmanship for petty political scores has been a major factor in the continuing deaths in Long Kesh. The people of Cavan-Monaghan hold the present coalition government directly responsible, through firstly their inactivity, and afterwards their open support for pres-sure to be placed on the hunger strikers and their families.”

Ó Caoláin recalled all the other Irish hunger strikers who had died as a result of British intransigence, three of them elected representatives: Terence MacSwiney, Bobby Sands and Kieran Doherty. Again of Doherty, he added that Kieran had taken his place amongst all those who fought for the three tenets of republicanism: “Equality as embodied by James Connolly, who struggled to achieve a classless society; liberty, the liberty of Patrick Pearse, and the fraternity of Wolfe Tone.”