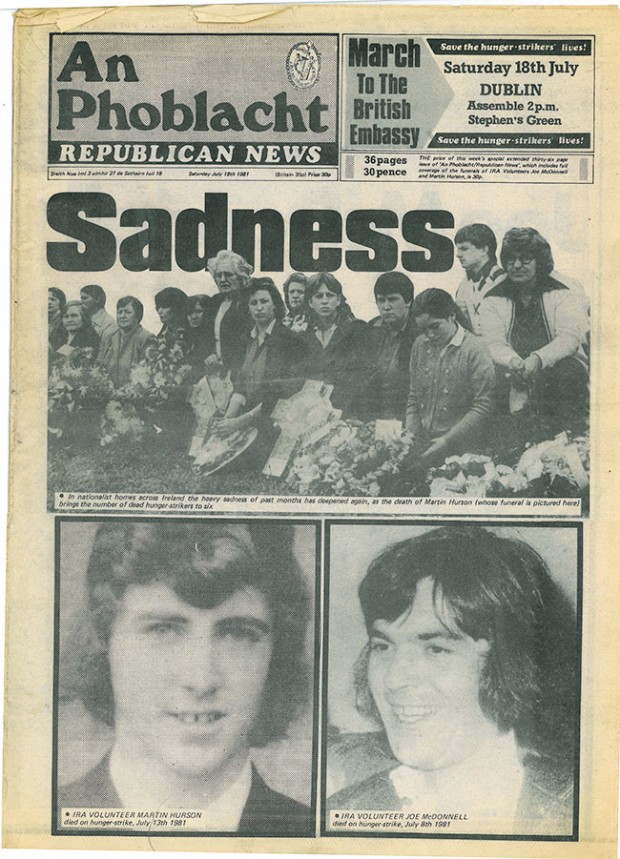 • In early July 1981 An Phoblacht reported on the deaths of Joe McDonnell and Martin Hutson on hunger strike in the H-Blocks of Long Kesh, the fifth and sixth strikers to die.

The death of Joe McDonnell 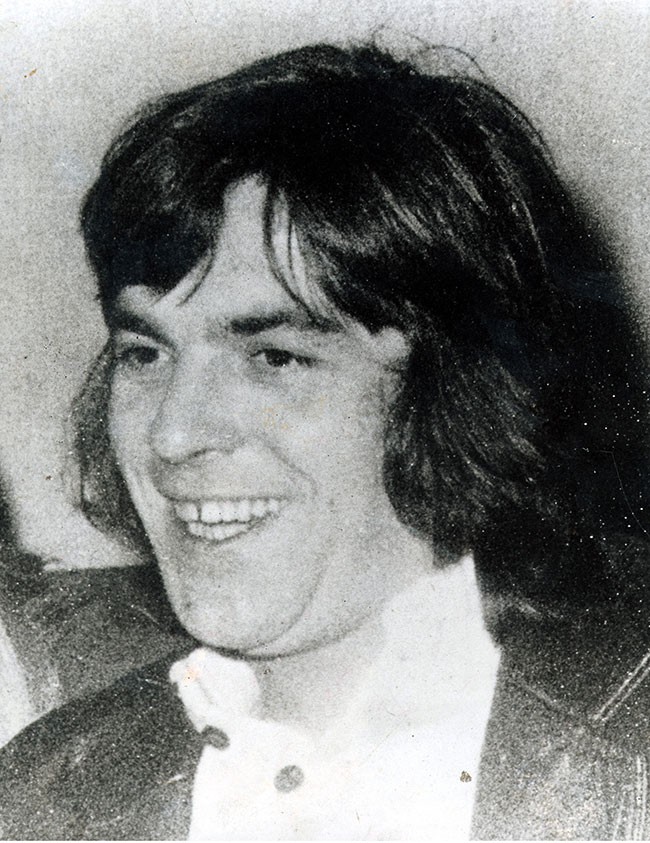 IRA Volunteer and Hunger Striker Joe McDonnell from Lenadoon in Belfast passed away at 5.15am on Wednesday, 8 July after 61 agonising days on the Hunger Strike. His wife Goretti had maintained an almost constant vigil by his side but with a callous act of disregard for her feelings when he died, the RUC called her in, ostensibly to identify the body.

From Wednesday evening through to the Friday morning McDonnell’s body had lain in state in the family home. During this time thousands of people filed past the coffin to pay their respects to the fallen Volunteer.

In a reflection of the effect the Hunger Strike had throughout nationalist Ireland those filing past came from throughout the country. There were people from Dublin, Sligo, Leitrim, Crossmaglen, Tyrone and further afield.

Individuals who paid their respects included relatives of other Hunger Strikers – Rosaleen Sands, mother of Bobby, and Pauline McGeown, wife of Pat who was at that time on hunger strike. A particularly poignant visit was that of Jimmy Dempsey whose 16-year-old son John, a member of Fianna Éireann, had been shot dead by a British soldier in the disturbances following McDonnell’s death. Also present was Joe McDonnell’s brother Frankie - one of the longest serving blanket men who had been released for 12 hours in order to attend the funeral. 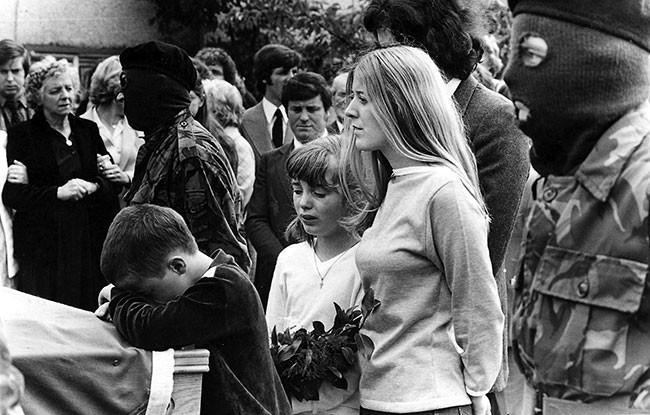 • Joe McDonnell’s wife Gorretti, his children and his brother Frankie pay their respects

It was a measure of the ripple effect that the Hunger Strike, and more particularly British intransigence and brutality, were having on the nationalist community that at the same time another blanket man, Tommy Cogrove, was out on temporary release to attend the funeral of his sister, Nora McCabe, killed by an RUC plastic bullet.

At midday the coffin was sealed and a Tricolour and the black beret and gloves of an IRA Volunteer were pinned to it. With British army helicopters hovering noisily and provocatively overhead the cortege moved off. Led by a lone piper, it made its way to Oliver Plunkett Church at the top of Lenadoon for Requiem Mass.

After the service the coffin was carried towards Milltown cemetery. McDonnell’s three brothers were amongst those carrying the coffin and it was flanked by his wife Goretti and their children Bernadette and Joseph and other members of the immediate family. When the cortege reached Andersonstown Road the coffin was placed on trestles and an IRA firing came forward and rendered a final salute. 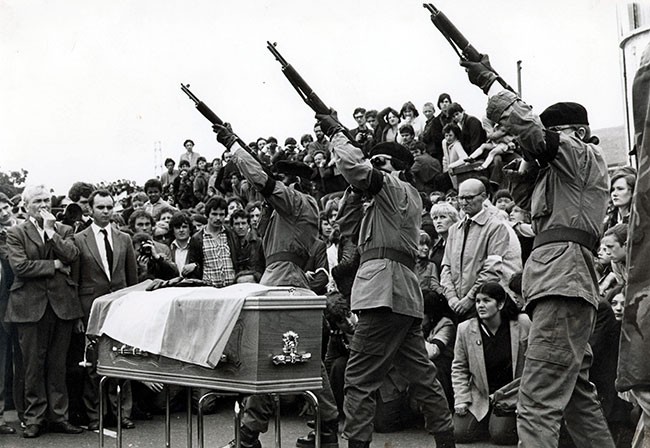 After observing a minute’s silence the IRA firing party disappeared into a nearby garden. Then, a barrage of high velocity gunfire was heard as it became obvious that crown forces were attempting to kill or capture members of the IRA firing party. Simultaneously the British army and RUC opened up on the cortege with a hail of plastic bullets amidst scenes of pandemonium and panic. In the assault, one of the mourners – a brother of then Sinn Féin Vice President Gerry Adams  – was shot and seriously wounded. He was then taken to Musgrave Park military hospital.

Luckily, the head of the funeral cortege had moved on a few minutes before the attack and was making its way towards Milltown. Six IRA Volunteers took the coffin on their shoulders for the last leg of the journey to the Republican Plot.

Chairing the graveside proceedings was Eamon McCory of Sinn Féin. He extended the sympathies of the Republican Movement to the family and went on to condemn the SDLP and the Dublin government who had not applied sufficient political pressure on British Prime Minister Margaret Thatcher. As a result, Thatcher was claiming that not one responsible per-son in Ireland was asking her to concede the prisoners’ 5 demands. 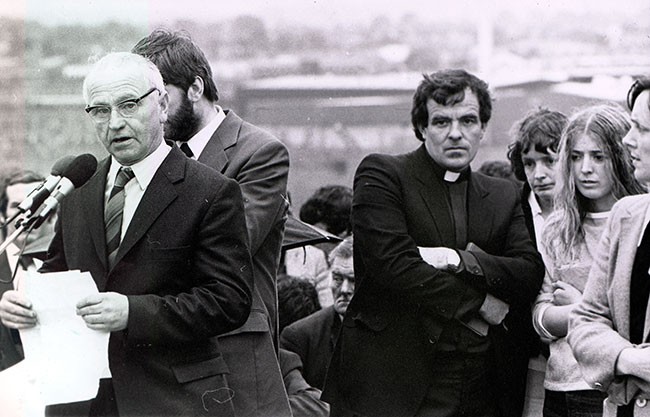 After the blessing, conducted by Father Matthew Wallace, John Joe McGirl, Chairperson of Leitrim County Council and election agent for McDonnell in the 26 County general elections, gave the oration. Speaking of the deceased Hunger Striker, he said: “He has died rather than debase the cause he served, rather than live with the forced tag of criminality on him. His courage is an inspiration, not only to his fellow prisoners, not only to the Irish people who admire such courage – the world stands in wonder and admiration, accepting that men such as Joe McDonnell are not criminals, but patriots.”

McGirl went on to lambaste British policy in Ireland, saying: “The policy of England and the English government towards Ireland down through the years has been one of jailing, shooting and hanging. Today, this week, their policy has changed somewhat. They have left over hanging and replaced it with the rubber bullet, plastic bullet and live round.

“Men, women and children are murdered in the streets of Belfast and Derry and in the occupied part of the north eastern Six Counties. I want to say here that the respon-sibility for this lies with the British govern-ment, and I say to the British Government that she has no right in our country and never had, and that the way forward is for her to withdraw her forces from the occupied part of our country and let the Irish people resolve their differences themselves.

“She is not here as a friend, she is here as a treacherous foe, and we recognise her as such.”

In conclusion he said: “We will build Joe McDonnell a memorial, we will build so many of his comrades who are buried here a memorial, and their memorials will be the freedom and the unity of the Irish people.”

Throughout the 26 Counties there were numerous vigils, reflecting the growing anger of the population, and in the north, as previously mentioned, two people were killed by crown forces in the aftermath of Joe’s death.

More worrying for the British was the continued and growing support abroad. In the United States there were numerous protests in New York, Philadelphia, Chicago and San Francisco to name but a few. There were also numerous demonstrations in Australia and New Zealand.

In France, lawyers formed a commission tasked with investigating conditions in the H-Blocks and French parliamentarians wrote to the Inter-Parliamentary Union in Geneva, asking it to take action in support of the two H-Block TDs.

In Italy, an incendiary bomb exploded on the roof of the British Consulate and there were protests and demonstrations in Belgium and Portugal. 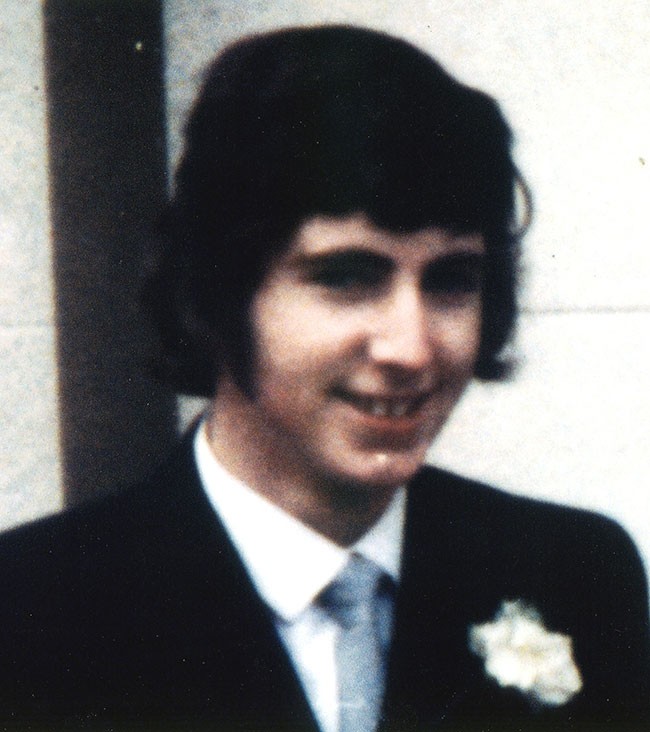 The death of IRA Volunteer Martin Hurson on 13 July 1981, after 46 days on the Hunger Strike, was unexpected. The suddenness of his death, coming only five days after that of Joe McDonnell, came as a shock, since two previous Hunger Strikers – Kieran Doherty and Kevin Lynch –  had been almost a week on hunger strike ahead of Martin.

Hurson had replaced South Derry man Brendan McLaughlin who was forced to come off the Hunger Strike due to a burst stomach ulcer. His health, since being moved to the prison hospital, had been deteriorating at a far quicker rate than that of his comrades. Throughout the Hunger Strike he had difficulty keeping down the required daily five pints of water. This problem caused him to hallucinate and he suffered from a degree of incoherence in his speech. He rapidly deteriorated towards the end. 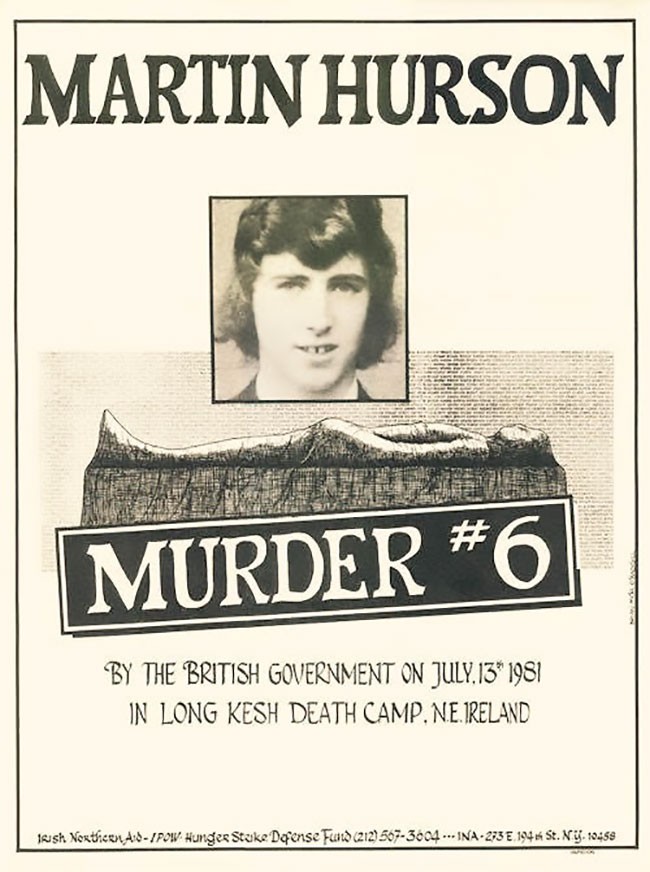 Martin Hurson was the sixth H-Block Hunger Striker to die. Coming two weeks earlier than might have been expected, his death disproved the assessment that the Hunger Strikers were not in danger until around the 60-day stage. Even as the young Tyrone man was dying, the vindictiveness of the prison authorities never abated. Though the family had been sent for due to his serious condition, Hurson’s brother Francie was refused entry to the prison because he arrived after 10pm. He spent the night outside the H-Block gate as his brother Martin died inside.

The following morning Martin Hurson’s body was removed by the RUC to Omagh hospital without consultation with the family. This move was designed to deny mourners en route the opportunity to pay their last respects. Despite this, over a hundred cars followed the hearse from Omagh to the Hurson home in Cappagh, County Tyrone. Relatives, friends and comrades carried the coffin for the last mile home, escorted by a uniformed guard of honour and followed by a large procession of sympathisers. Later at the Hurson home, guards of honour from the IRA, Cumann na mBan and Na Fianna Éireann stood to attention as unending lines of mourners filed past the coffin. 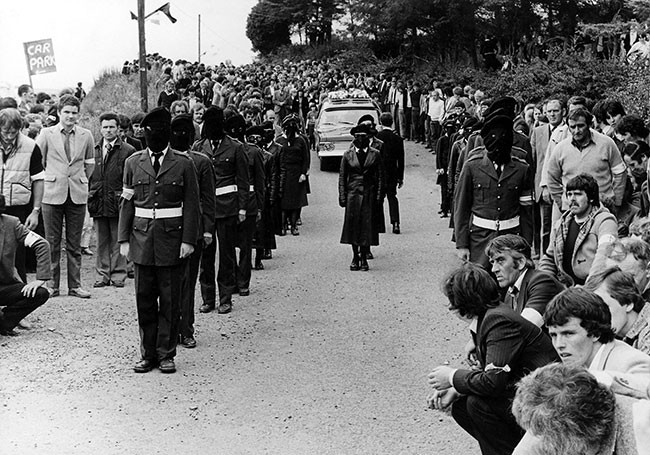 On Wednesday afternoon Martin Hurson’s relatives carried the Tricolour-draped coffin, with gloves and beret on top, down the country lane from his home to the hearse waiting to take his remains to Galbally church. A lone piper led the hearse, which was escorted by an IRA guard of honour, followed by Cumann na mBan and Na Fianna Éireann. Wreath bearers headed the thousands of mourners as three British army helicopters flew overhead. Following the funeral Mass the guard of honour carried the remains to the burial plot. Four armed and uniformed IRA volunteers emerged from the mourners and fired volleys from hand-guns in honour of their dead comrade. They then stood for a minute’s silence.

Tyrone republican Francie Molloy presided over the graveside ceremonies. The 1916 Proclamation was read out and a bugler sounded the Last Post as IRA Volunteers stood to attention in salute of their former comrade. An impassioned and comprehensive oration was given by Sean Lynch, who had been Hurson’s election agent in the 1981 general election. Speaking of Martin Hurson’s past, Lynch described the 26-year-old as “a member of a large family whose mother died when he was only a boy, a young man who played Gaelic football for the local GAA club in Galbally, a lover of all things Irish who was forced to emigrate and who returned and threw in his lot with those who dispute the claim of England to rule over one inch of Irish soil.” 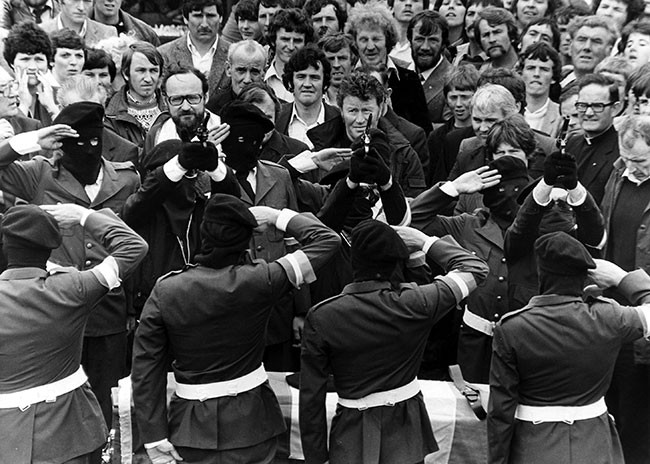 Lynch talked about the sacrifices of freedom fighters of the time, saying they possessed the same “virtue of patriotism, of spiritual, unselfish love of country as it was understood by Mercier, Casement, Pearse, MacSwiney, Stagg, Sands, and Martin Hurson”. He went on to say their sacrifices would “save the cause of Irish independence from destruction at the hands of foreign enemy and native com-promiser, and carry it to victory yet”. There was a certain prophetic note to Lynch’s words and again when he said that the spirit of Martin Hurson shines and “calls like a voice from heaven, filling young hearts with courage and determination.”

He went on to outline the origins and sources of not only the horrendous conditions endured by prisoners in Armagh and the Blocks, but also “all our social and political evils - the British connection”. He also pointed to the “pretence and skulduggery” of the Irish Government of the time who, six deaths later, still refused to support the prisoners’ five demands.

Only three days separated the funerals of Joe McDonnell and Martin Hurson and the proximity of the deaths intensified the depth of frustration and sadness felt by supporters of the Hunger Strikers. Ireland was awash with protests but the British Government wouldn’t budge.