Remembering The Battle of St. Matthew’s - 50 Years On 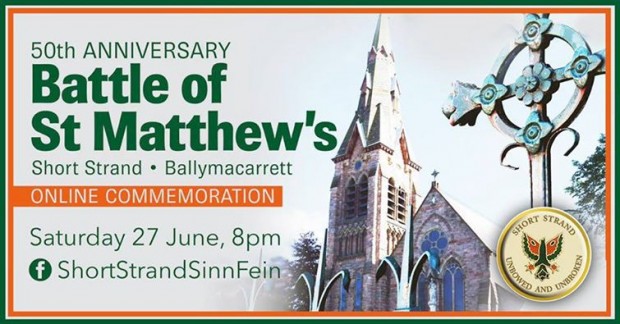 50 years ago the people of the Short Strand/Ballymacarrett stood in defence of their community and inspired a new generation of republicans across Ireland and throughout the world with their courage.

On the streets of our parish the local IRA and Citizens Defence protected the people from rampaging loyalist mobs who wanted to repeat the devastation inflicted in August 1969. The RUC and British Army stood by - local Volunteers stepped up.

This online event, through word and song, will remember the bravery and sacrifice of that night, of the years before and after; it will also celebrate the proud, confident community that prevails to this day.

50 years ago, on the 27th June 1970, the Battle of St. Matthew’s shaped a new reality for Ireland; the Orange State was rocked to its foundations, the defiant stand taken in Short Strand/Ballymacarrett signalled clearly ‘this far and no further’ for the sectarian state and from that, things would never be the same again.