The Mountjoy Hunger Strike and the General Strike of 1920 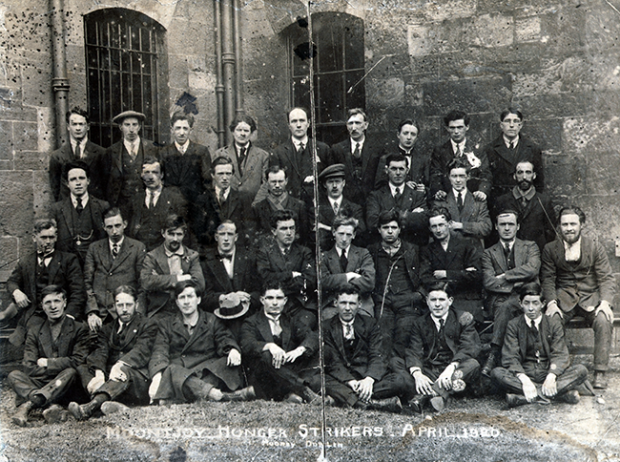 In April 1920 with Dáil Éireann and Sinn Féin banned by the British regime and the Black and Tans newly deployed in the country, the struggle for Irish independence intensified. On Easter Sunday 4 April the IRA burned out tax offices and RIC barracks throughout Ireland, effectively forcing the British crown forces to concentrate in the larger towns and cities. In the jails the struggle was stepped up, culminating in a mass hunger strike in Mountjoy Prison, Dublin.

British government policy towards Irish political prisoners vacillated between de facto recognition of their status and punitive efforts to treat them as criminals. The hundreds interned in Frongoch Camp in Wales after the 1916 Rising were treated as prisoners of war. But in 1917 attempts to criminalise the prisoners led to the hunger strike in Mountjoy in which Thomas Ashe died after force-feeding in September of that year. In 1918 prisoners in Crumlin Road Prison in Belfast led by Ashe’s Kerry comrade Austin Stack, won political status but this was gradually withdrawn. As a result in December 100 prisoners in Crumlin Road staged a revolt and smashed up the prison, causing an estimated €7,000 -worth of damage. The prison was besieged by the British Army, cheered on by loyalists outside the walls.

In 1919 political prisoners were treated as criminals in Mountjoy and engaged in various forms of resistance. In October they smuggled tools onto their wing and in a co-ordinated effort one night they broke through their cell walls to adjoining cells. Prison staff then attacked them with water hoses and forcibly handcuffed them. This provoked the ‘Racket Strike’ when all through the night the Republican prisoners banged on their cell doors with their handcuffs. Then followed a hunger strike and after six days the prisoners were given temporary release, conditional on their return to the jail two months later. None of the prisoners returned. 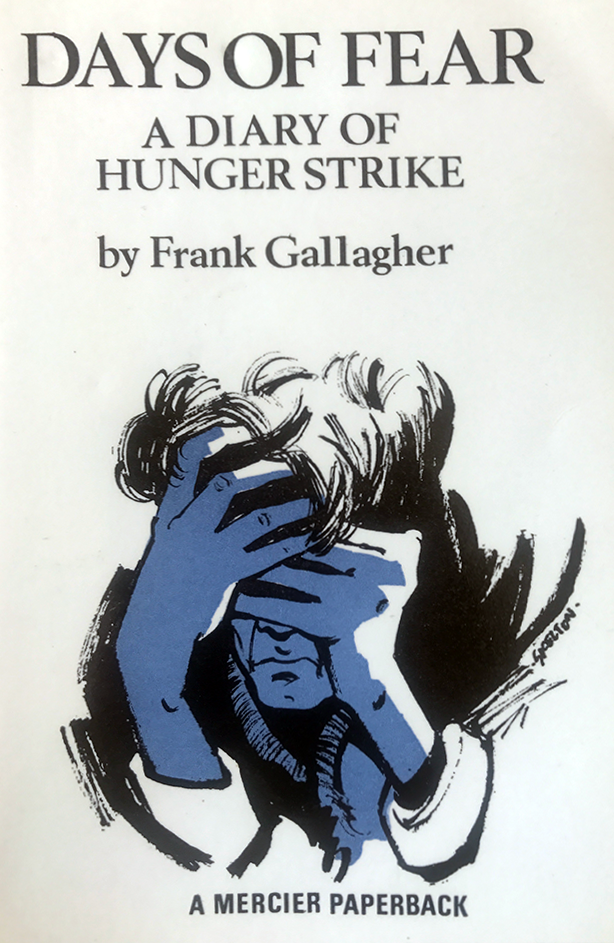 Frank Gallagher, who worked in the Republican Publicity Department, was jailed for making a Republican speech, was on the October hunger strike and was back in Mountjoy in April 1920 on the second. He wrote vivid accounts in his books ‘The Four Glorious Years’ and ‘Days of Fear – a Diary of Hunger Strike’. He stressed the importance of the prison struggle:

“During those four years of struggle the prisoners knew they could play a major part. If the greatest possible number of troops, warders, officials could be tied down to the jails, there would be less for the lads to fight outside. We knew what risks had to be taken. Thomas Ashe had set the standard.” (‘The Four Glorious Years’).

By April 1920 men released in October were re-arrested and back in Mountjoy, along with newer prisoners, many of whom had not been charged with any offence and were interned under repressive legislation. The leader of the IRA prisoners was Peadar Clancy of Cranny, County Clare, a 1916 veteran and senior Dublin Brigade officer. The prison authorities were told that unless the prisoners were either given prisoner of war status or released by Easter Monday 5 April they would commence a hunger strike. 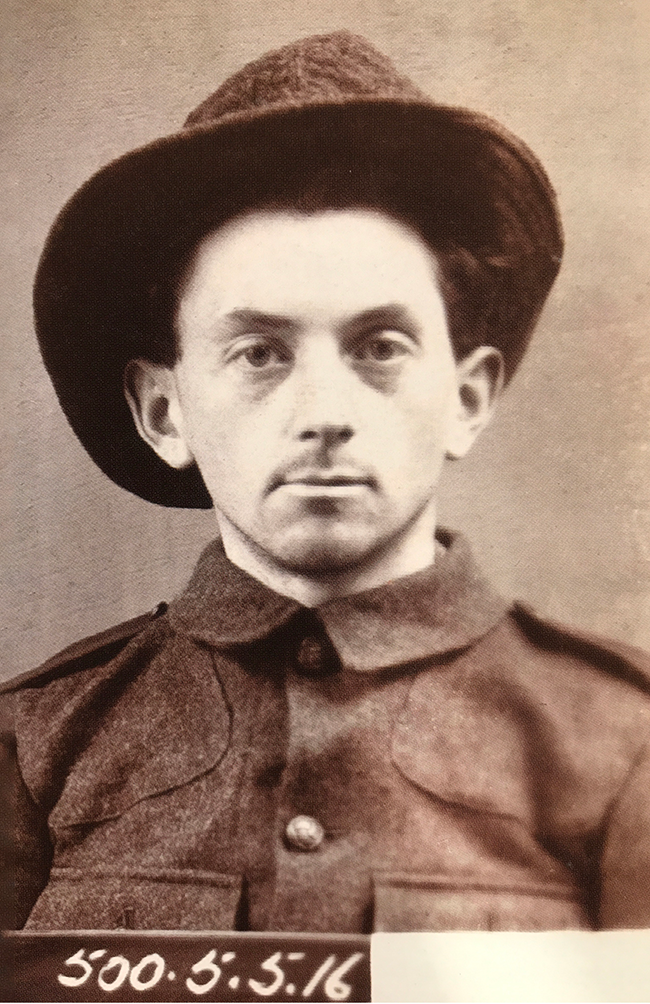 On 5 April on B Wing Peadar Clancy read out the pledge each prisoner took commencing the hunger strike:

“I pledge myself to the honour of Ireland and to the lives of my comrades not to eat food or drink anything except water, until all here have been given prisoner of war treatment or are released.”

While there had been several hunger strikes in the early 20th century, including in Mountjoy by women suffrage campaigners (1912), James Connolly during the Lockout (1913) and Republican prisoners (1917), none had been prolonged. Thomas Ashe was done to death by force-feeding at the start of his strike. It was still believed that hunger strikers could not live beyond a couple of weeks, so from the beginning tension was high around the Mountjoy hunger strike that began on 5 April.

Crowds gradually began to gather outside the jail until the streets were packed, day and night. The British Army was deployed on the jail walls with machine-guns and a cordon was thrown around it with hundreds of troops, tanks and barbed wire. Starting with workers in Broadstone railway station, trade unionists in Dublin began to leave work and march to the jail.

The British regime made various efforts to undermine the hunger strike. An offer to send certain prisoners to jail in England where they would be given prisoner of war status was dismissed with contempt by the Republicans. Letters were sent to relatives stating that the prisoners were seriously ill and inviting them to visit in the hope that they would persuade the men to end the strike. This proved counter-productive as the visits by relatives from all around the country encouraged the men and further highlighted the hunger strike which was receiving widespread national and international press attention.

Co-operation between the Republican Movement and the Trade Union Movement had grown closer and in the January 1920 town and city council elections a number of candidates were elected as Sinn Féin and Irish Transport & General Workers Union joint representatives. The unions now made a critical intervention. On 12 April the Executive of the Irish Trades Union Congress announced a General Strike for the following day 13 April “as a protest against the inhuman treatment of political prisoners and to demand their immediate release”. In its address to the workers of Ireland the ITUC Executive said:

“You are called upon to act swiftly and suddenly to save a hundred dauntless men. At this hour, their lives are hanging by a thread in a Bastille. These men – for the greater part our fellow workers and comrades in our Trade Unions – have been forcibly taken from their homes and their families and imprisoned without charge, or, if charged, tried under exceptional laws for alleged offences of a political character, in outrageous defiance of every canon of justice.

“They are suspected of loving Ireland and hating her oppressors – a heinous crime in the sight of tyrants, but one of which hundreds of thousands of Irish working men and women proudly acclaim their guilt.” 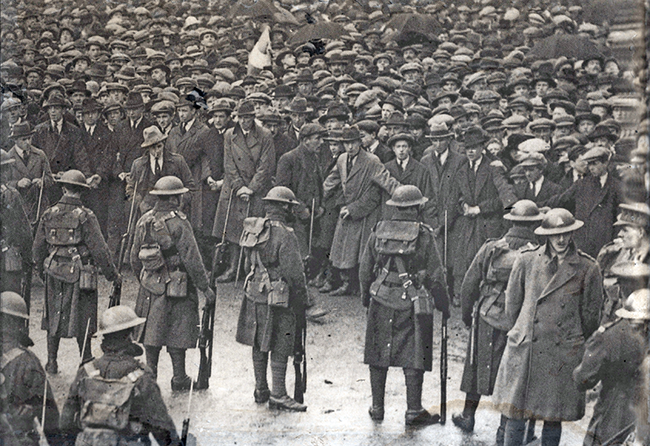 The address noted how the General Strike of 1918 had defeated Conscription and said the hunger strike was another “supreme crisis”. The shut-down on 13 April was almost total throughout Ireland. In some places workers’ committees took over towns, calling themselves soviets after the Russian example, and carrying the red flag along with the Republican Tricolour. While officially a one-day strike it was widely extended to the following day and in many centres to a third day.

The General Strike brought the situation to crisis point. The Governor of Mountjoy went to Peadar Clancy’s cell and told him that political prisoner status would be granted. Then Clancy, acting on his own initiative according to Gallagher, took a huge risk. He said they would not accept status only release and the strike would continue until they were free. After the Governor left Clancy told the prisoners:

“I know the risk I’m taking, and I mean to take it. There are men here who must get out before they are recognised. [Note: Some of the IRA prisoners were using false names and if their real identities were known could face trials and sentences of death – M.MacD]. We must get out ourselves. This fight is only beginning. The Castle isn’t done by a long chalk. But they’re done for the moment. The general strike has them beaten.” (‘The Four Glorious Years’).

Clancy’s calculated risk was about to pay off though it must have appeared reckless when Andrew Bonar Law, leader of the Conservative Party, on behalf of the Coalition Government, told the House of Commons that there would be no releases.

The Lord Mayor of Dublin Laurence O’Neill intervened, while Sinn Féin and Labour leaders visited the jail. Shaken by the General Strike which had paralysed the country, and under huge political pressure, the British regime was given a way out. In a meeting with O’Neill and the British Lord Lieutenant Lord French it was agreed that the doctors could make the final decision – if the life of a prisoner was in danger he could be released. 14 April was the last day of the hunger strike and on 15 April all the hunger strikers were released and taken in ambulances from Mountjoy to the nearby Mater Hospital as huge crowds of people cheered them on. 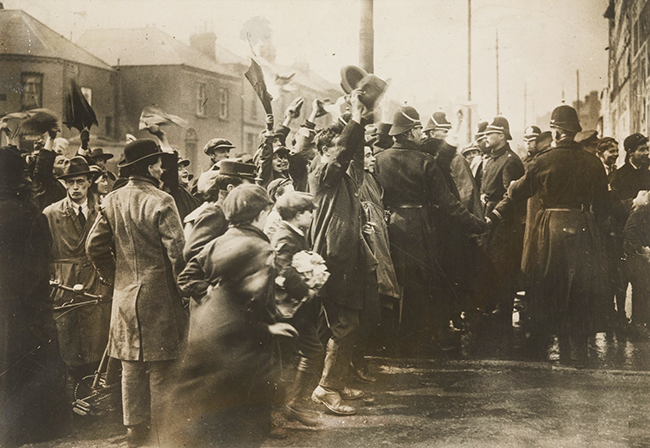 • Showing support for the Hunger Strikers

There were celebrations across Ireland and in Miltown Malbay, Co. Clare the RIC and British Army launched an unprovoked attack on a celebrating crowd, killing three men. This was a taste of things to come, as indeed had been the murder of the Sinn Féin Lord Mayor of Cork Tomás Mac Curtáin and the deployment of the Black and Tans shortly before the hunger strike. The appointment of General Neville Macready as British military supremo in Ireland marked a significant escalation in repression.

The General Strike has been described by one historian as “the highest point in the Irish national liberation struggle” and pointed to “how it might have been finally and decisively won”. (‘The Irish Transport & General Workers Union – the Formative Years’ by C. Desmond Greaves.)

Later in 1920 there were to be more hunger strikes, this time claiming the lives of prisoners, while in Dublin Castle Peadar Clancy was to be murdered by the British regime which he had so successfully confronted in Mountjoy.

• The Mountjoy Hunger Strike and the General Strike took place between 5th and 14th April 1920, 100 years ago this week.