Remembering the Past - 50th Anniversary 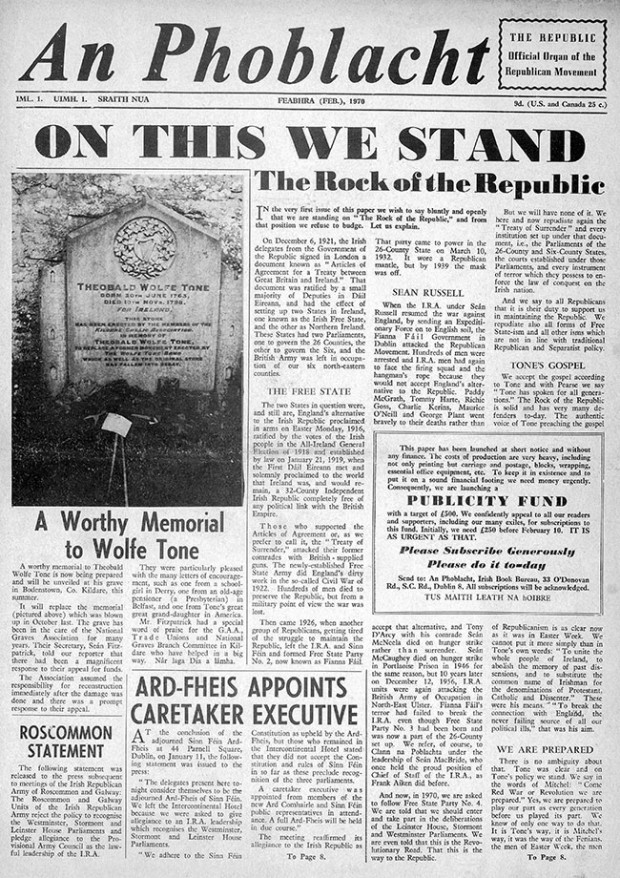 Following the split in the IRA in December 1969 and Sinn Féin in January 1970, one of the first actions of those who rejected the Goulding/MacGiolla leadership and who formed the Provisional Army Council of the IRA and the Caretaker Executive of Sinn Féin was to launch a publicity fund with a view to establishing their own republican newspaper.

Since 1948 the newspaper of the Republican Movement had been The United Irishman/An tÉireannach Aontaithe and in the ‘69/’70 split the Goulding/Mac Giolla organisation retained control of that paper. The Caretaker Executive of Sinn Féin, which was formed by the delegates who walked out of the Ard Fheis on 11 January and resumed what they regarded as the legitimate Ard Fheis in Kevin Barry Hall, 44 Parnell Square, announced their intention to start a new monthly publication.

The name chosen was An Phoblacht (The Republic), the title of the IRA paper of 1925 to 1937. The paper was initially based at the Irish Book Bureau, 33 O’Donovan Road, South Circular Road, Dublin, which was run by 1916 veteran Joe Clarke, a member of the Caretaker Executive. Another member, Seán Ó Brádaigh, was the first editor.

The inaugural issue consisted of eight pages and contained the first statements of the Provisional Army Council and the Caretaker Executive and carried reports from around the country of IRA units and Sinn Féin cumainn pledging allegiance to these bodies. An article described how some 250 members of Sinn Féin in North Kerry had been expelled in 1966 because they disagreed with the direction taken by the Goulding/MacGiolla leadership.

An Phoblacht was anxious to show that the position represented by the Caretaker Executive was not right-wing but advocated the development of an Irish form of socialism based on the tradition of ‘Comhar na gComharsan’ (co-operation of neighbours). It called for control of industries by workers’ co-operatives. Two articles covered the housing crisis in Dublin.

The paper’s Northern Correspondent had a lengthy feature on the Civil Rights movement. This is interesting in the light of subsequent events. It warned against either Socialists or Republicans trying to have their political demands adopted by the Civil Rights movement. Instead the writer urged unity on the basis of the original demands for an end to discrimination in voting, housing and jobs and the repeal of repressive legislation. The writer commented:

“I would point out that agreeing to work within the Constitution does not mean agreeing to uphold it – or even to like it, as many Unionists seem to think. The right to work openly and democratically for one’s political aims (which may or may not be the re-unification of Ireland) is one of the civil rights we claim.”

The March issue of An Phoblacht reported that 20,000 copies of issue No. 1 had been sold, the first papers going on sale at Dublin’s GPO on 31 January.

Volume 1, Number 1 of An Phoblacht was sold throughout Ireland in February 1970, 50 years ago this month.