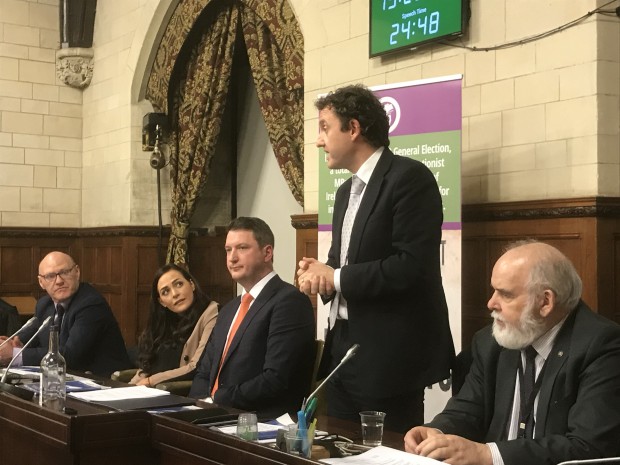 “Many people in the north are getting fed up with people standing up and saying they want to see Irish unity in their lifetime and then sitting back down again and do nothing,” - Professor Colin Harvey

Nationalists are getting fed up with those who talk about wanting to see a united Ireland but do nothing about it, a leading human rights professor and Irish unity campaigner has said.

Professor Colin Harvey made the comment when he addressed a packed public meeting on Irish unity in Westminster tonight hosted by the Sinn Féin MP team.

More than 200 people, including MPs from the SNP and the British Labour Party, attended the event in the Grand Committee Room at Westminster.

Recently elected Sinn Féin MP John Finucane was the keynote speaker at the meeting and said the next Irish government must begin actively planning for Irish reunification.

During his speech, Professor Harvey, a leading human rights expert and member of the Ireland’s Future group, said nationalists in the north wanted action from the Irish government.

“Many people in the north are getting fed up with people standing up and saying they want to see Irish unity in their lifetime and then sitting back down again and do nothing,” he said.

His remarks came after the leaders of Fianna Fáil and one Gael claimed they support Irish Unity but have refused to take any action on the issue.

Professor Harvey also said there is growing support for unity right across the island.

“There is remarkable momentum in the debate and it is unstoppable

“I don’t feel comfortable leaving it to a British Secretary of State to decide the direction of the future of Ireland. Irish government must get involved,” he said.

John Finucane also called on the Dublin government to catch up with the public and begin planning for unity.

"Following the election in the south, the next Irish government needs to begin actively preparing for unity. Failure to do so would be a dereliction of duty.

"No Irish government could or should be neutral when it comes to Irish unity.

"The next government needs to catch up with the people and start putting plans in place for reunification,” he said.