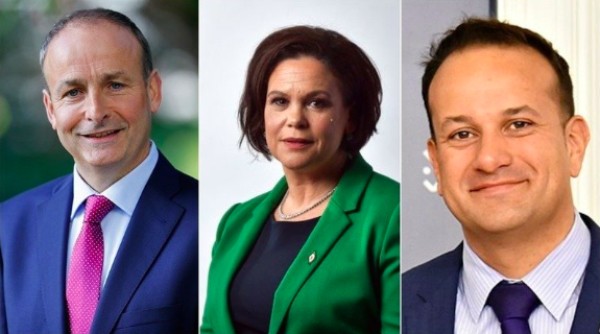 OVER 12,000 people have signed a petition within 48 hours calling for Sinn Féin leader Mary Lou McDonald to be included in the final televised debate of the general election on RTÉ.

RTÉ has come in for criticism after it announced that the final debate would only include Taoiseach Leo Varadkar of Fine Gael and Fianna Fáil leader Mícheál Martin.

The announcement from RTÉ came days after the Irish Times reported that senior Fianna Fáil and Fine Gael officials were “keen on a head-to-head debate”.

If it goes ahead as planned it will be the first time in 13 years that the final debate will only include Fine Gael and Fianna Fáil.

Sinn Féin's Director of Elections Pearse Doherty has described the move as an “utter joke” noting that Fianna Fáil has propped-up the Fine Gael government for the last four years, with Sinn Féin taking the role as main opposition party:

“There is no difference between these two parties. They have the same ideology and the same outlook, and combined they received less than 50% of the votes of the Irish people at the last general election.

“They have tried to carve up government and opposition, and now they want to carve up this election by excluding Sinn Féin,” he said.

The RTÉ decision has raised further eyebrows as the latest opinion poll published by the Sunday Times/Behaviour & Attitudes on 22 December showed Fianna Fáil and Fine Gael on 27% support each with Sinn Féin on 20%. Other parties were further back with Labour and the Greens on 6% each.

In 2011 RTÉ's final debate included Fine Gael, Labour and Fianna Fáil. At the time those parties were polling at 37%, 20% and 16% respectively.

The petition can be signed at HERE