Remembering the Past - Centenary of the 1920 local government elections 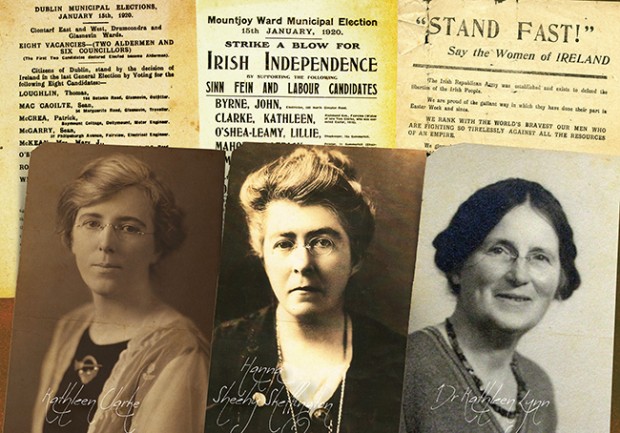 “I recognise the Republic established by the will and vote of the Irish People as the legitimate Government of Ireland.” – Pledge taken by Sinn Féin candidates

The 2020 General Election is happening 100 years after the first elections in Ireland held under the proportional representation/single transferable (PR/STV) voting system. The 1920 local government elections were held in two stages – city and town councils in January and county and rural councils in June. Sinn Féin swept the boards, as the party had done in the 1918 General Election, and won majorities on most councils throughout the country.

The elections took place while Ireland was in the grip of military rule by the British government. There was mass imprisonment, the banning of Dáil Éireann and Sinn Féin since September 1919, and draconian laws as British crown forces carried out widespread repression. Against this the Irish Republican Army had become increasingly active, with concerted attacks on RIC barracks in January 1920. Nonetheless the British government believed that it could put down the Republicans and they hoped that the elections of 1920 would see a rejection of Sinn Féin, or at least a severe drop in support. To achieve this aim the British government decided to switch from the first-past-the-post system used in the 1918 General Election (and still used in Westminster elections today) to the PR system. 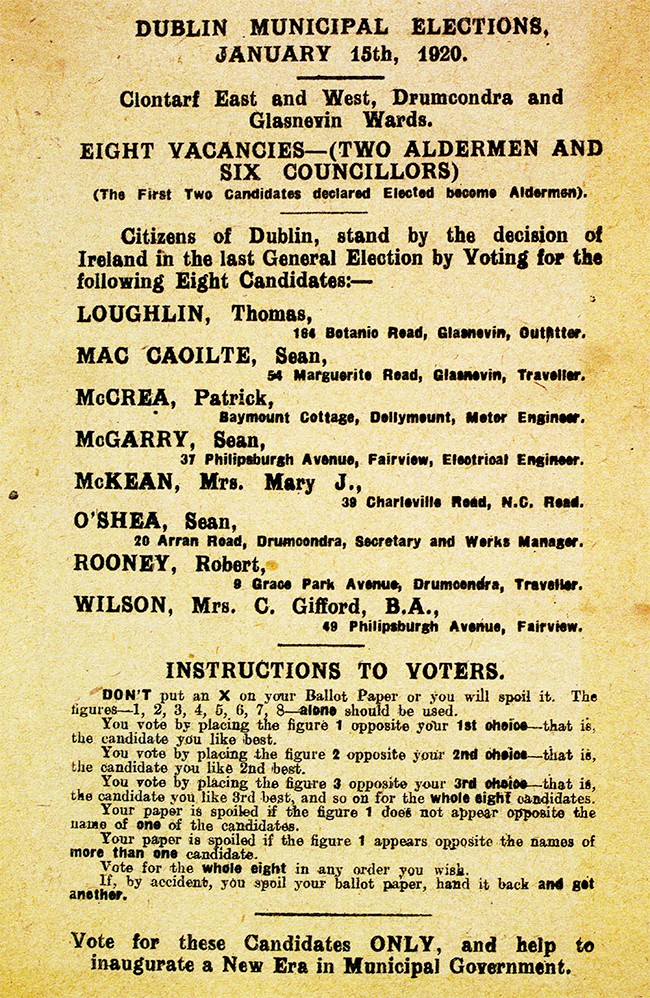 Much to the surprise of many in Britain, Sinn Féin supported the change to the new voting system. “That Sinn Féin, instead of opposing a change declaredly designed to cripple its power, should wilfully help in its development is more than remarkable”, commented the London ‘Daily News’. In fact, as pointed out by Arthur Griffith, Sinn Féin had supported proportional representation since 1907. Welcoming the system in 1920 Éamon de Valera said: “Whether it benefited us or not I would be in favour of the principle because it is based on justice. We know the object for which it was designed. It was a crooked object…”

Shortly after its establishment in January 1919 Dáil Éireann had set up a Local Government Department. It urged councils to continue to access funding from the British government’s Local Government Board, especially for council housing schemes. At the same time preparations were under way for the 1920 elections and for Sinn Féin-controlled councils to pledge allegiance to the Dáil. In November 1919 Sinn Féin Director of Elections Joe McGuinness announced that all Sinn Féin candidates would be required to take a pledge and to commit to implementing the Democratic Programme of the Dáil. The pledge taken by Sinn Féin candidates was: “I recognise the Republic established by the will and vote of the Irish People as the legitimate Government of Ireland.” 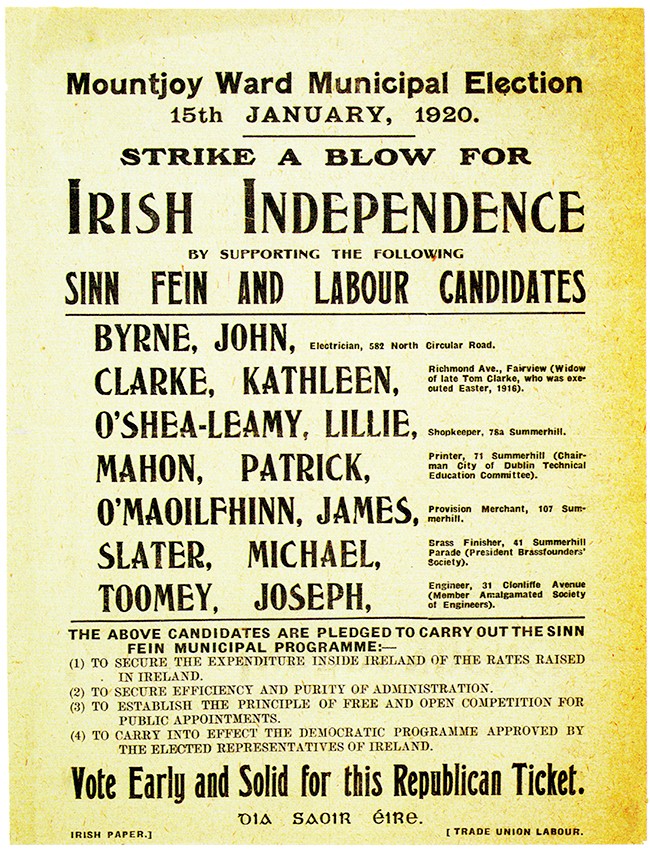 As in 1918 there were different views within the trade union movement on the issue of separation from Britain but the majority of trade unionists were strongly in favour of national self-determination and many local labour candidates stood on a Republican platform, in agreement with Sinn Féin. In Dublin and Cork the Irish Transport and General Workers Union put forward ‘Republican Labour’ candidates. This helped greatly to win Republican majorities on many councils.

The local elections were notable for the participation of women. 42 women were elected, mostly for Sinn Féin. These included prominent Republican women like Hanna Sheehy Skeffington, Dr. Kathleen Lynn and Kathleen Clarke. Hanna’s feminist journal ‘The Irish Citizen’ commended Sinn Féin for its good example in putting forward women and condemned the other parties for their tardiness in this regard. 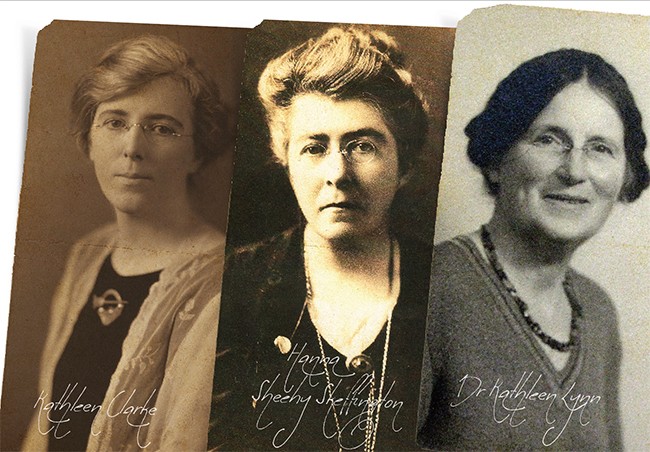 Polling day was 15 January and the result was a strong endorsement for Sinn Féin and the Irish Republic. The headline result was that out of 127 City Corporations and Town Councils 72 had Republican majorities. In 26 more a majority of Republicans and Nationalists were elected by agreed voting, while there were 29 majority Unionist councils. Sinn Féin won the largest number of seats, followed by Labour, Unionists, Home Rulers and Independents.

In Derry City the nationalist parties, including Sinn Féin, combined to take control of the Corporation for the first time. While Unionists performed solidly in their heartlands, the election, like that of 1918, exploded the myth of ‘Unionist Ulster’, and even within the Six Counties earmarked for Partition there was a strong nationalist showing. Andrew Wilson of the Proportional Representation Society said that “the six counties alleged to be homogenous were shown to be divided most deeply, and the apparent solidarity of old had been proved to rest upon their false method of registering public opinion”. As one historian has commented: “No wonder the Ulster Unionists got rid of PR at the earliest opportunity.” (Arthur Mitchell ‘Revolutionary Government in Ireland – Dáil Éireann 1919-1922’, Gill & Macmillan, 1995). The abolition of PR was to be one of the first acts of the Unionist government of ‘Northern Ireland’, with gerrymandering institutionalised for 50 years. 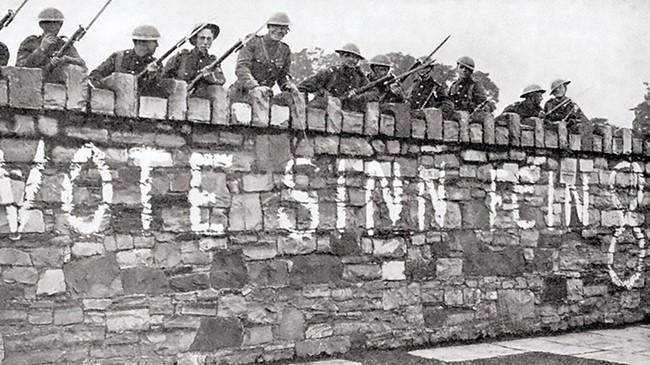 When the new councils of 1920 convened those with Republican majorities proceeded to elect Sinn Féin mayors and to pledge allegiance to Dáil Éireann. In Cork City Tomás Mac Curtáin was elected Lord Mayor and in Dublin City veteran Sinn Féin Councillor Tom Kelly was elected. However Kelly was in an English prison and on his release, in broken health, he was unable to take up the position so outgoing Lord Mayor Laurence O’Neill (independent nationalist) continued in office. The City Clerk in Dublin was loyal to Dublin Castle and refused to accept the signature in Irish of Sinn Féin Councillor Jenny Wyse Power and as a result he was dismissed from his post by the Council.

The second round of local elections took place in June 1920. These were for County Councils and various rural Councils and boards. It was an even bigger success for Sinn Féin which won majorities in 28 of the 33 County Councils, including Fermanagh and Tyrone, gained from the Unionists for the first time. Republicans won majorities in 182 of the 206 Rural Councils. According to the Dáil’s ‘Irish Bulletin’, 90 per cent of Labour candidates stood as Republican Labour. Sinn Féin’s political platform had committed to expanded public housing, health services and education.

Overall, the January and June elections of 1920 provided unequivocal majority support for Dáil Éireann and the Irish Republic. The British government still publicly denied this democratic decision but the British press recognised reality:

“Throughout the country generally Sinn Féin and Labour have dominated the Councils.” – ‘Daily Herald’, 19 January 1920.