A new inclusive Executive can, and must, be different. 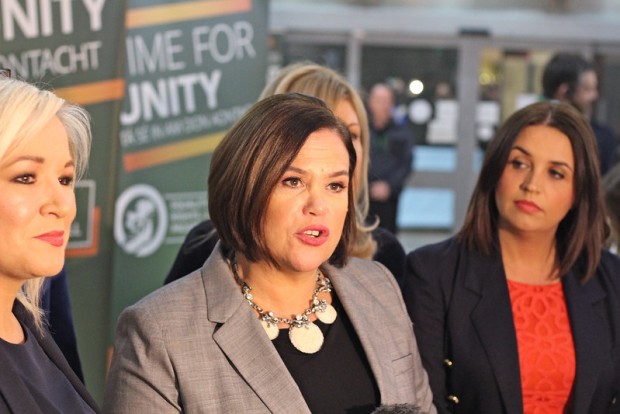 On the 16th December, talks to re-establish the north’s political institutions resume and these talks must conclude by the 13th January at the latest.

Sinn Féin have made preparations, we have been in direct contact with both governments and our negotiators stand ready to engage in these talks. It is our view that a deal is possible and that a deal has always been possible.

In February 2018, the DUP walked away from an agreement and they cannot continue to hold the rest of us to ransom. Almost three years on, the suspension of the institutions is unacceptable and unsustainable.  It is our view that the Executive and Assembly can be up and running by Christmas time or early in the New Year.

The outstanding rights issues, legacy issues and reform of the Petition of Concern have long been discussed and must now be concluded. Political Unionism, the DUP and the British government must finally step forward. Sinn Féin has never been the obstacle to reaching a deal and both governments know that.

I believe these talks can be successful; the issues we face are not new and the heavy lifting has already been done. The resolution of these issues is already in place - an Irish Language Act was agreed at St. Andrews, mechanisms to deal with the past were agreed at Stormont House, the worst aspects of Brexit are mitigated by the current Withdrawal Agreement and the operation of the Petition of Concern needs to return to the manner envisaged in the Good Friday Agreement.

Sinn Féin stands behind these agreements and we will honour all the commitments we have made. It is a cornerstone of politics, and life, that an agreement reached must be an agreement implemented. That is our firm view and Sinn Féin will enter these talks to resolve the outstanding issues and it is the responsibility of all parties to fulfil their obligations. We do not underestimate the challenges ahead, but we believe agreement in possible.

Over the past number of years, efforts to re-establish the institutions of the Good Friday Agreement have been undermined by the deal struck between the Tories and DUP at Westminster. This is a deal that has inflicted savage public service cuts, forced nurses and other health workers out on strike and imposed the chaos of Brexit. This deal has demonstrated that the best interests of the people of the north - and Ireland as a whole - will be served at home, not in Westminster.

It is beyond time for the DUP to join with us and the other parties in re-establishing and operating the institutions of the Good Friday Agreement in real partnership; guided by respect, equality, consent, power-sharing and good governance that are the foundations of the Agreement. This remains the best and the only way to resolve political differences, to deliver for the people and to provide for peaceful and democratic constitutional change.

For those opposed to the Good Friday Agreement, the past number of years have demonstrated that there is no workable alternative to the mechanisms of the agreement and proper power sharing.

As we enter the New Year it is time to get back to that.

But even if we do resolve the outstanding issues - and I believe we can - there are further challenges to be met.

A new inclusive Executive can, and must, be different.

There can be no return to the status-quo.

Brexit is a challenge for the whole island and future trade talks will shape our economy for generations. Tory austerity and cuts to public services are felt in schools, hospitals and homes across the north, and a new Tory government, if elected, will return emboldened and empowered to continue their assault on public services.

No public servant should have to take to the picket line to secure a fair day's pay for a fair day’s work. No family should be left homeless or the sick left to linger on waiting lists or trolleys. In a prosperous society there should be no place for food banks or children living in poverty.

So, let’s strike a deal, let’s re-establish the inclusive power sharing institutions and let’s meet the challenges ahead in united and reconciled society.