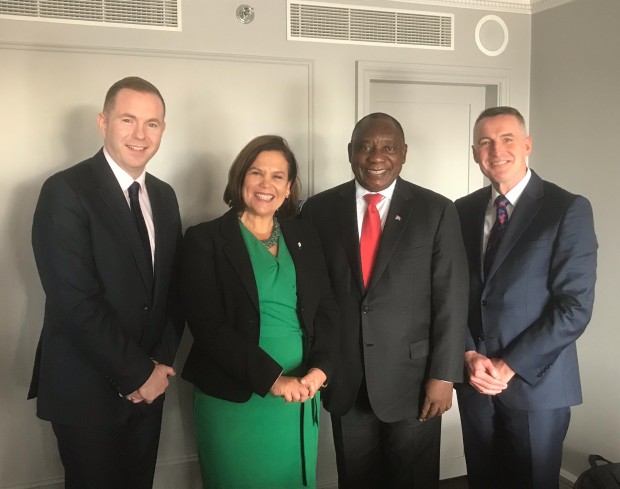 Irish republicanism itself is a product of international ideas and influences. The founders of modern republicanism, the United Irishmen and women were inspired by the French Revolution 230 years ago; and it was shaped by the American Revolution almost 30 years before that. - Declan Kearney

I was thinking about Ronnie Kasrils last Saturday as I watched the Rugby World Cup final between South Africa and England.  Later that evening we exchanged messages.

Ronnie is a veteran of the liberation struggle in South Africa, and was a leading figure in both the ANC's military wing, Umkhonto we Sizwe, and the South African Communist Party.  Later he served as a government minister under Presidents Mandela and Mbeki.

Just three weeks ago he visited Belfast briefly.  He had been on holiday and attended the premiere of his play 'The Ice Cream Boys', which is based on his latest book 'A Simple Man'. 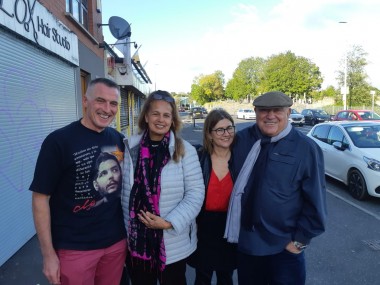 We spent an afternoon together and visited the James Connolly Visitor Centre.  Ronnie was hugely impressed, as I knew he would be, by this exceptional initiative to popularise the socialist republican ideas of James Connolly, and his revolutionary and trade union legacy for future generations.

Ronnie and I have been friends since 2005 when he came to Ireland at the invitation of Cúige na Sé Chondae to participate in a programme of events to mark the centenary of Sinn Féin's foundation.

On that occasion he visited as a government minister with the approval of President Mbeki.

He was mandated by President Mbeki to return twice more to engage with republican activists on the ANC's strategic approach towards the transition of South Africa away from the old apartheid state into a new multi racial national democracy.  He also addressed two Ard Fheiseanna in that period.

Those initiatives followed very significant support given by the ANC to the emerging Irish peace process, as well as very important political solidarity for Sinn Féin. 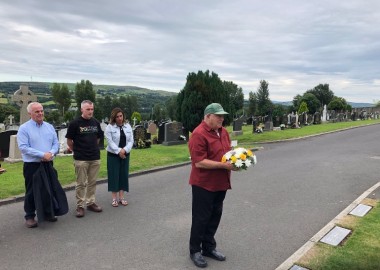 During the 1990's representatives of the Sinn Féin leadership visited South Africa, and ANC leaders came to Ireland.

The current President of South Africa, Cyril Ramaphosa, who was a key ANC negotiator, made an enormous contribution in the lead up to the Good Friday Agreement, (GFA) and in also helping consolidate the peace process.

He met with republican POWs in Long Kesh and later acted as an international arms inspector of IRA munitions dumps alongside  Martti Ahtisaari.

Political solidarity between the South African and Irish national liberation struggles is long established, and strong fraternal relations have existed between Sinn Féin and ANC for decades.

In recognition of the deep historic relations between our Parties, a Sinn Féin delegation, including Mary Lou Mc Donald, Chris Hazzard and myself met the leader of the ANC, and President of South Africa, Cyril Ramaphosa on the 14th October last. 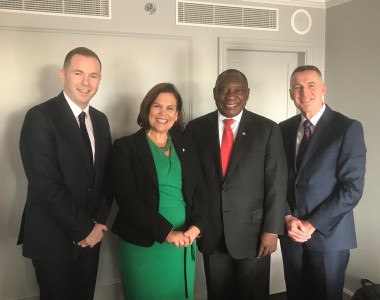 During this significant meeting we briefed President Ramaphosa on the political crisis in the north, the threat to the GFA, as well as the repercussions of Brexit for the entire island.

We discussed the need for international political and diplomatic support for Irish unity, and the relevance of South Africa's transition to national democracy, for the management of future constitutional change in Ireland.

We also had discussions on areas of mutual cooperation between Sinn Féin and the ANC, particularly on issues of progressive international solidarity.

Internationalism is central to republican politics.

Irish republicanism itself is a product of international ideas and influences.  The founders of modern republicanism, the United Irishmen and women were inspired by the French Revolution 230 years ago; and it was shaped by the American Revolution almost 30 years before that.

Throughout the history of Ireland's independence struggle, Irish republican revolutionaries have both given to, and received from others much solidarity in the common cause of national and social liberation.

One of the most iconic moments of international solidarity during the 1981 Hunger Strike occurred when Cuban President Fidel Castro spoke publicly in support of the prisoners; saying:

"Let tyrants tremble before men who are capable of dying for their ideals, after 60 days on hunger strike."

This year marks the 60th anniversary of the landmark Cuban Revolution.  It has been an inspiration for freedom loving people in both the northern and southern hemispheres. 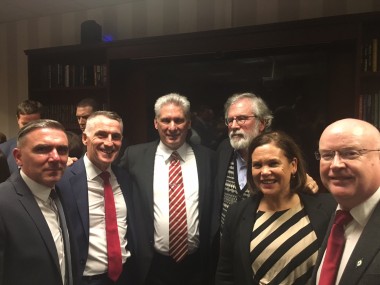 Remarkably, despite mutual historic connections between Ireland and Cuba, there has never been an official visit here by a Cuban President until last month, when President Higgins and the Irish government hosted an official welcome and reception for the visiting President of Cuba, Miguel Diaz Canel.

It was especially appropriate that this first official visit by the President of Cuba coincided with the 60th anniversary year of the Cuban Revolution.

A Sinn Féin delegation including, Mary Lou, Gerry Adams, Paul Gavan, Conor Keenan and I, was delighted to have an opportunity to meet with President Diaz Canel, at the invitation of the Ambassador to Ireland, Hugo Ramos.

Sinn Féin possesses very strong solidarity links with the Cuban struggle for progress.  In fact a group of Party members has just returned from a solidarity visit which lasted two weeks.

The commitment of Cuba to international solidarity and in particular by providing practical assistance to developing countries is unparalleled.

In turn, Sinn Féin remains committed to developing the practical and poltical links between Ireland and Cuba, and continuing to work closely with President Diaz Canel and his government to promote our shared priorities of international solidarity, peace, equality, and social justice.

It will provide a special platform from which to reaffirm solidarity with all those still struggling for freedom and equality, and in pursuit of a better world for all citizens.

The Ard Fheis will be attended by foreign ambassadors and diplomats.  Many international observers from progressive parties of the left with whom our Party maintains fraternal relations will attend from across Europe, and beyond.  We will also host special guests from South Africa, Palestine, Catalonia, Basque Country, and Cuba.

But international solidarity and fraternal relations are also essential to internationalising support for the achievement of a united Ireland. 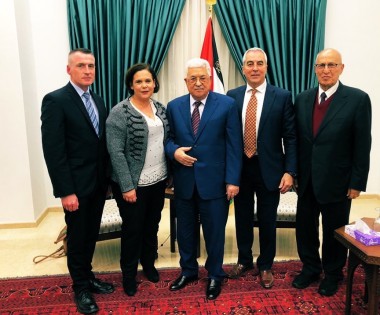 Irish unity has become the defining issue of our generation.

Brexit has made Britain's partition of Ireland a European issue.

A watershed has opened up in the politics of Ireland, and for political relations between Ireland, Britain and Europe.

The debate on future constitutional change and a transition to Ireland's reunification has moved centre stage.  That discussion is achieving increased international resonance.

An international axis supporting, lobbying and persuading for the democratic aim of Irish unity is a strategic imperative.

Sinn Féin's work to build diplomatic and fraternal relations, and solidarity with other international democrats and progressives is now more important than ever before.