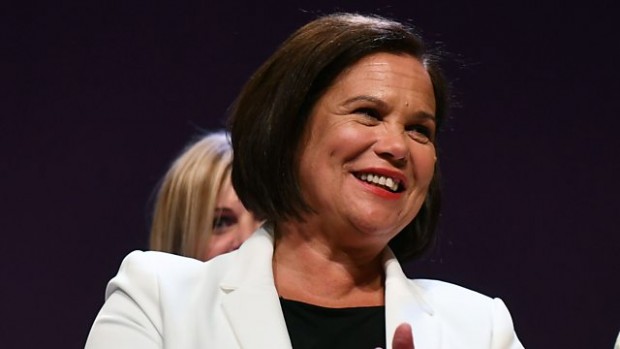 You cannot deny a vote because you fear the outcome. - Mary Lou McDonald

Last week, in response to a question from Gerry Adams, An Taoiseach confirmed that the cabinet had agreed a Presidential Referendum Bill that would be moved in the Dáil before the summer. This Bill will pave the way for a Constitutional Referendum to extend Presidential voting rights to Irish Citizens living in the North and the diaspora. It is expected that this referendum would be put to the people in October or November of this year.

The passing of this referendum will bring the state into line with international best practice and good governance. Many nations extend voting rights to citizens regardless of where they reside.

But the issue goes beyond just best practice and governance. It is about defining and giving practical effect to nationhood. It is a fundamental outworking and recognition that the Irish Nation extends beyond the boundaries of the state. An acknowledgment that nationhood is not determined by geography or bounded by history.

It is the outworking of Article 2 of Bunreacht na hEiereann which states:

“It is the entitlement and birth right of every person born on the island of Ireland, which includes its islands and seas, to be part of the Irish Nation. That is also the entitlement of all persons otherwise qualified in accordance with law to be citizens of Ireland….”

Partition separated our nation and the policies of successive governments forced generations into economic exile. Neither of these reduced or diminished the sense of belonging and the sense of nationhood felt by those in the North or among the Diaspora. It is their right to be part of the Irish Nation.  It was successive governments that turned their backs on Irish citizens in the north and abroad.

We now have the opportunity to right that fundamental wrong and elect a president with a mandate from all Irish Citizens and the nation as a whole.  It is a referendum that can and must be won. Our nation is changing, it is global and it is growing beyond partition.

All parties in the Dáil support the extension of voting rights as do the nationalist parties in the North.  This referendum should be a platform for all parties to work together to demonstrate a vision of the nation beyond the confines of history.

This is an important campaign and one which all parties can and must work together to win. It is an historic the realisation of nationhood that is above day-to-day party political differences.

The parties and government must use our resources and networks to ensure that the referendum passes.

The diaspora and Irish Citizens in the North can make a huge contribution to ensuring success and winning the right to vote. They will rely on the people in the south to secure their rights and place in our nation.

I have travelled and met with diaspora in the US, Canada, Britain, mainland Europe and Australia. They are our family and friends. They are the Skype generation.  Many dream of returning home and some will stay in their new homes, but all have a pride in being part of the Irish Nation.

There are those in society who will oppose these changes and to date it has mostly been on the basis of how it will reflect on election outcomes. That is a betrayal of democracy; you cannot deny a vote because you fear the outcome. Irish citizens as members of our nation should have the vote in determining the election of the President of our nation.

The extension of voting rights is not controversial, it is good governance and international best practice. It is also an opportunity to overcome history, to redefine our nation and to value all of the children of the nation equally regardless of where they reside.