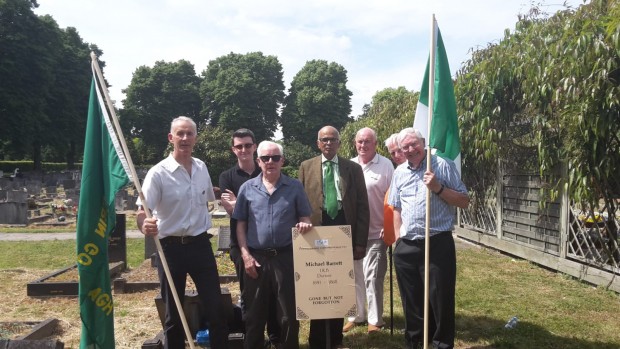 Republicans gathered in London yesterday to mark the 151st anniversary of the death of Fenian Michael Barrett, who was the last person to be publicly hanged in England.

The commemoration was held in the City of London Cemetery, the final resting place of Michael Barrett, on Sunday afternoon.

Michael Barret was born in Ederney, Fermanagh and became involved with the Irish Republican Brotherhood aged 27.

He was arrested following the Clerkenwell explosion in London in 1867.

Despite witnesses testifying that he had been in Scotland at the time of the explosion, Barrett was convicted by false testimony and sentenced to death.

Following his conviction, Barrett made a speech from the dock which has gone down in republican history alongside those by Tone and Emmet.

In his speech, Barrett said: "If my life were ten times dearer than it is and if I could by any means, redress the wrongs of that persecuted land by the sacrifice of mu life, I would willingly and gladly do so."

Despite pleas for clemency, Barrett was hanged on May 26, 1868 outside the walls of Newgate Prison before a crowd of thousands. He became the last person to be publicly hanged in England.