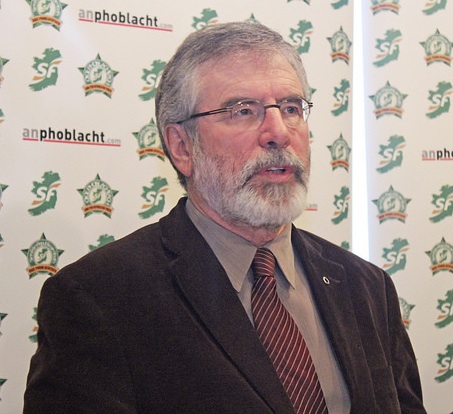 "Nigel Dodds’ claim that Martin McGuinness did not to resign because the issues involved were ‘comparatively minor’ is an insult to his memory and to the intelligence of the wider public."

Sinn Féin TD Gerry Adams has accused the DUP’s Nigel Dodds of an outrageous attempt to shift the blame for the current impasse onto the former deputy First Minister, Martin McGuinness.

Gerry Adams said: “Nigel Dodds’ claim that Martin McGuinness did not to resign because the issues involved were ‘comparatively minor’ is an insult to his memory and to the intelligence of the wider public.

“Martin McGuinness was gravely ill when he travelled from his sick bed to deliver his resignation in Belfast. I tried to dissuade him from travelling, but he insisted. He told me he wanted to tell the DUP face to face that he was resigning. That was Martin’s way.

“He did so after Arlene Foster refused to stand aside to allow a proper inquiry into her handling of the RHI debacle. Martin resigned reluctantly as someone who had put his heart and soul into making the power-sharing institutions work over the previous ten years.

“He was left with no choice.

“There is nothing minor about a £600 million cost to the public purse from RHI and the allegations of corruption surrounding the DUP’s stewardship of it.

“There is nothing minor about the denial of equality to Irish speakers, women and the LGBT community.

“There is nothing minor about the disgraceful and unlawful blocking of inquests for grieving families. Or the crass decision in the mouth of Christmas to cut LIOFA funds for disadvantaged children to attend the Gaeltacht.

“None of these were minor issues then or now. They were, and they remain, fundamental to good governance. If they are easily resolved then the DUP should agree to resolve them and al-low us all to get back into government.

“Martin is no longer here to respond to Nigel Dodds but Sinn Féin will robustly defend his integrity against these scurrilous comments.

“The DUP will not be allowed to rewrite or airbrush out their total arrogance and disrespect.”