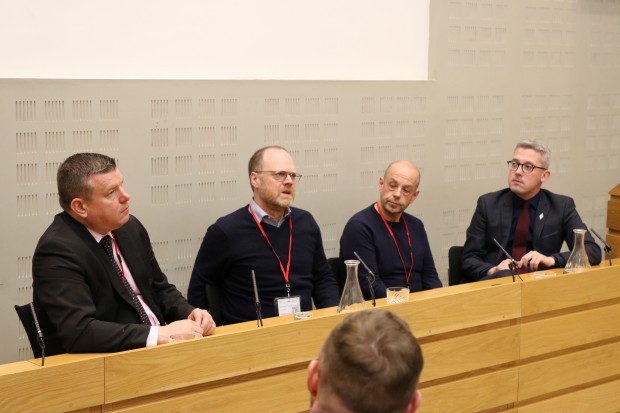 “We wouldn’t see the level of accountability in public life today without courageous, investigative journalism”, solicitor for the two Niall Murphy said.

Investigative journalists Trevor Birney and Barry McCaffrey were in Leinster House yesterday afternoon to brief members of the Oireachtas on their ongoing legal battle that emerged after their documentary ‘No Stone Unturned’ was aired in December 2017.

The documentary shines a light on collusion between the UVF which murdered six men in the Heights Bar in Loughinisland, Co Down in 1994, and British intelligence services.

Instead of the PSNI  following up on the evidence laid out in the documentary, police officers have attempted to silence the journalists who have tried to uncover the truth. Both McCaffrey and Birney are currently on bail after they were arrested by the PSNI having been accused of possessing confidential documents.

The film makes use of and shows what appears to be a draft Police Ombudsman report from 2011 that was sent anonymously to McCaffrey.

The arrests of both Birney and McCaffrey have been seen widely across the press community as attacks on investigative journalism and press freedom. “They tried to put a gagging order on us,” McCaffrey told public representatives in attendance.

“We wouldn’t see the level of accountability in public life today without courageous investigative journalism,” solicitor for the two Niall Murphy said.

Sinn Féin Senator Niall Ó Donnghaile organised the Leinster House briefing and has said that Sinn Féin will continue to support press freedom and the families of Loughinisland in their quest for justice.