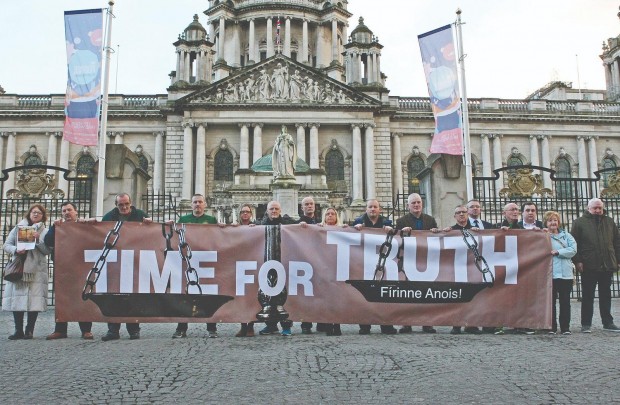 "The same powerful sections of the British military and security establishment which directed Britain's 'dirty war' in Ireland continue to exert significant influence in the present. They are responsible for the failure to resolve the legacy impasse because of their determination to conceal the reality of British state collusion, assassination and systematic illegality. For them, legacy represents a new battle ground."

Last Wednesday Karen Bradley, the British Secretary of State for the north of Ireland, when speaking in Westminster once again insulted the victims of British state violence in Ireland by saying that the state forces responsible for massacres, summary executions, state sponsored assassinations of Irish people, and who organised, armed and directed unionist paramilitary death squads, had not committed crimes, and acted in "dignified and appropriate way".

Her comments caused huge offence and anger to those who have suffered at the hands of state agencies and agents, and outraged all right thinking people.

British state violence and injustice in Ireland was not an aberration. It's never been a case of there being a few rotten apples in the barrel. That cliché doesn't apply. 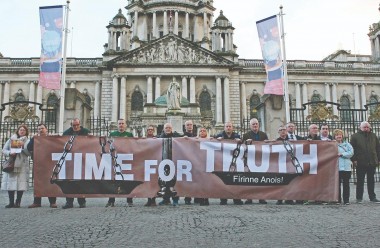 The politico-military basis of British state policy in the north of Ireland was set out by General Frank Kitson as far back as 1971, in his enduring book on counter insurgency strategy, 'Low Intensity Operations'.

Kitson helped to develop an integrated political, military and legal doctrine that would oversee British operations in Ireland. From the early 1970s that included the use of the internment and torture policy; the recruitment of counter gangs (death squads), within nationalist areas to target republican activists and ordinary civilians; intelligence and psychological operations; and, the deployment of clandestine military units and special forces (such as the SAS), alongside conventional combat troops.

That strategic approach was refreshed and upgraded after the British state introduced the Hillsborough Agreement in 1985 with the Irish government in an effort to promote the SDLP, and push back against the growing electoral and political support for Sinn Féin after the Hunger Strikes.

In parallel, British military intelligence and other state agencies began the systematic reorganisation and arming of the unionist paramilitary death squads. Arms shipments from South Africa and elsewhere, were imported and key agents such as Brian Nelson, among others, were placed into controlling positions among the death squads. 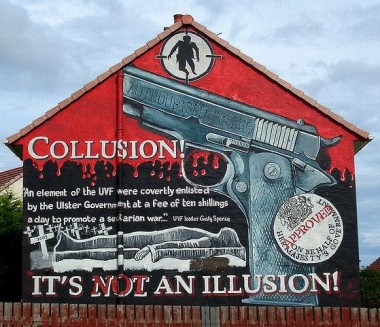 New shadowy military intelligence agencies such as the Force Research Unit (FRU) were deployed to the north under the command of Brigadier Gordon Kerr. The FRU had a prolific influence in the running of the unionist death squads.

The military and security establishment has always been central to the formulation and execution of British state policy towards Ireland. That has never changed.

The same powerful sections of the British military and security establishment which directed Britain's 'dirty war' in Ireland continue to exert significant influence in the present.

They haven't gone away.

Those who were always hostile to the peace process from within the Military of Defence and security services in Whitehall are still politically and psychologically at war with the Sinn Féin leadership.

Their opposition to progressive democratic and peaceful transformation is the reason that legacy issues, and how to deal with the past, is so destabilising within the political process, and indeed is the main factor preventing a new beginning to policing being achieved here.

They are responsible for the failure to resolve the legacy impasse because of their determination to conceal the reality of British state collusion, assassination and systematic illegality. According to their zero sum view of the peace and political processes, the British state has too much to lose. For them, legacy represents a new battle ground.

So they refuse to acknowledge the role of the state and its forces and agents in the conflict. They seek to promote a single British, pro unionist narrative of what happened.

But there is no single narrative.

That reality was implicitly accepted in the Stormont House Agreement (SHA) of 2014, and the decision to establish legacy mechanisms for dealing with the past.

Since 2014 however, the British government has blocked the implementation of the SHA by invoking its national security veto.

The British state, and this particular government, has deepened the legacy impasse by pro-actively encouraging a statute of limitations for British armed forces personnel, and thereby formalising the de facto impunity and immunity which has protected their actions throughout the conflict.

This sits in contrast with the fact that up to 20,000 republicans are estimated to have faced prosecutions, and served over 100,000 years in detention since 1969. 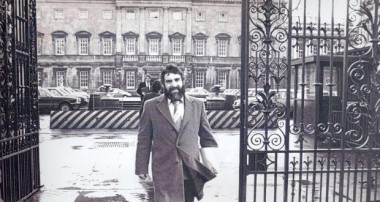 In the meantime, maximum information disclosure, truth and judicial redress continues to be denied to the many victims of hundreds of violent actions by the state and its agents: including the Dublin/Monaghan bombings; the Ballymurphy and Springhill massacres in Belfast; and the executions of, Aidan Mc Anespie, Pat Finucane, and Sinn Féin Councillor Eddie Fullerton; among so many others.

All sorts of commentary has surrounded Karen Bradley's remarks. The vast majority have been highly critical from across a wide spectrum of opinion.

But here's the rub.

Her statement came in a fortnight when the British Supreme Court ruled that no Article Two compliant investigations had occurred into Pat Finucane's killing: when the Police Ombudsman revealed a failure by the PSNI to disclose files and intelligence relating to the Ormeau Road Bookies massacre: while the detail of the Ballymurphy massacre by British soldiers continues to be revealed at inquest: and, only days before the Public Prosecution Service announces whether it will prosecute British soldiers responsible for the Bloody Sunday atrocity. 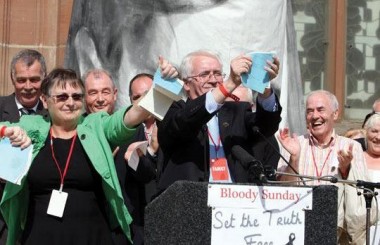 Her words were said in response to a DUP MP's question at a time when this British government is formally allied to the DUP, on Brexit, and to guarantee its political survival.

Most significantly, Bradley made these assertions whilst the British government consultation on legacy is extant, and on the same day Theresa May, the British Prime Minister, said she was looking at ways to protect British forces from prosecutions.

Theresa May and Karen Bradley have 'form' in Westminster as a tag team.

Last year they repeated in sequence the lie that legacy investigations processes were disproportionately focused upon state forces.

Now it has also emerged that last November Karen Bradley was recorded having an exchange at the Westminster NI Affairs Committee when "getting our soldiers off this hook" was raised.

Karen Bradley did not speak out of turn last Wednesday.

She was accurately expressing British state policy regarding the conflict in Ireland.

Many other examples stand out, notably, that of British Secretary of State Theresa Villiers who said in February 2016 that the reality of British state forces collusion in running unionist death squads during the conflict was "a pernicious counter narrative".

No British government has ever been neutral in the north.

Since it came to power in 2010, this British Tory government has pursued an aggressively, pro-unionist, single narrative policy.

It has negatively and deliberately mismanaged the political process in the north.

Successive Tory Secretaries of State have presided over waves of austerity and reduced the region to an economic and political backwater. They have consistently acted in the interests of the military and security establishment.

Karen Bradley's latest intervention was indeed absolutely appalling and offensive, but it wasn't surprising. She was doing her job; and her successors will do exactly the same.

Unless and until, the British government changes its pro-unionist and single narrative bias, legacy will continue to destabilise politics and poison the capacity of the PSNI to act in a fully transparent and accountable way, or to command full community confidence. 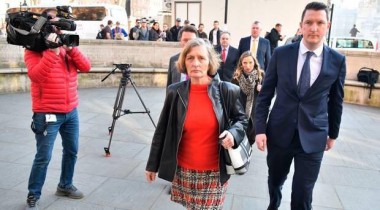 So for progress to be made the British state needs to accept its responsibility as a protagonist in the conflict.

This government must comply with the 'rigorous impartiality' required under the Good Friday Agreement (GFA) and commit to its full implementation.

It has to end its blocking of the SHA and support the immediate establishment of the legacy mechanisms, free from political interference. The attempts to introduce a statute of limitations for state forces must stop, and there should be no change to the definition of a victim.

The existing Tory/DUP alliance runs totally counter to the democratic basis of the GFA political process.

The Irish government also needs to recognise the gravity of the worsening political situation. It too has major responsibilities.

Appeals for apologies from Karen Bradley by An Tánaiste mean nothing to the victims of British state forces and agents, north or south.

The Irish government must start to hold the British publicly and politically, robustly to account. It has obligations to ensure implementation of both the GFA and SHA.

Failure, and, or unwillingness, by this Irish government to apply the necessary pressure on the British will compound the very deep anger which exists.

This is another key moment when nationalists in the north expect the Irish government to deliver on An Taoiseach's public commitment of 8th December 2017, that 'you will never be left behind by an Irish government.' 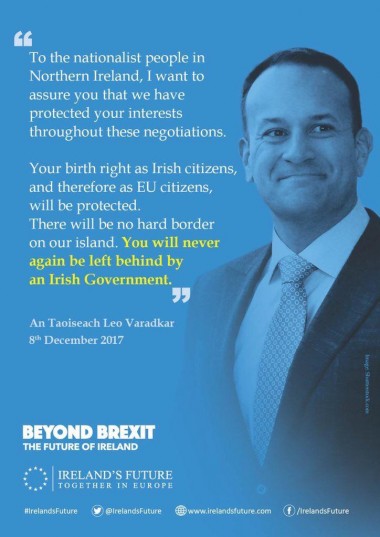 Resolving these issues, and ending the denial of fundamental democratic rights in the north are the required context to ensure our political institutions can be re-established on a sustainable basis, and build confidence that the British state, and it's elected governments, are truly committed to the peace process in Ireland - and, not simply on terms which are dictated by the dark side of the British establishment.