This is a political trial 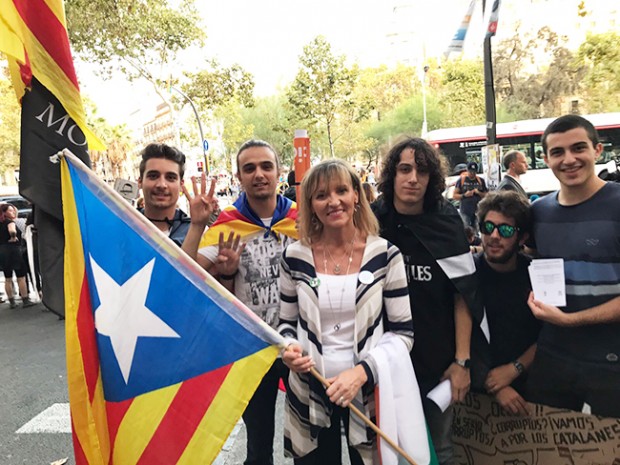 On February 12th, after having been in arbitrary pre-trial detention for over fourteen months, nine Catalan political prisoners, including, six former members of the Catalan Government, the former Speaker of Parliament and two civil society leaders, began a trial before the Spanish Supreme Court. They face the bogus charges of rebellion, disobedience and embezzlement of public funds.

The Spanish state contends that the prisoners organised or supported a “rebellious” referendum on self-determination, despite the fact that this was within the democratic mandate legitimately demanded by the Catalan people. The Spanish State now threatens Government Ministers who are now in jail with prison sentences of up to 25 years involving charges of “violent and public uprising”.

In 2017. I was in Catalonia observing the independence referendum and the subsequent election that followed. I witnessed the violence by the Spanish State against the Catalans at first hand, who were simply trying to exercise their democratic right to vote.

The brutal action of Guardia Civil officers who beat voters off the streets and dragged people away from polling boxes was seen by the international community and ignored by the EU Council and Commission.

Despite votes being stolen and some polling stations locked down, the Catalan people gave a resounding democratic endorsement of independence, both in the referendum and the election that followed.

Together, the members of the EU-Catalonia Dialogue Platform utterly condemn the repressive response of the Spanish authorities to the democratic expression of self-determination. We reject the false narrative that has been spun of sedition and rebellion.

Dialogue and negotiation, not imprisonment and criminal prosecution, should have been the instruments through which Catalonia’s legitimate and democratic right to self-determination ought to have been channelled.

These trials contradict the values that Spain claims to hold dear such as democracy, freedom of expression, assembly and to political participation. Even the trial process has been denounced by the prisoners for numerous irregularities during the pre-trial phase. These include bringing the appeals against the illegal pre-trial detention of the prisoners before the Spanish Constitutional Court, therefore blocking the prisoners’ access to the European Court of Human Rights.

The EU-Catalonia Dialogue Platform, will be watching and following this trial closely. This trial demonstrates revenge from some fundamentalist Spanish unionists; it certainly does not contribute to a reasonable solution to the historical tensions between Catalonia and the institutions of Spain.

The Catalan people have the legitimate right to democratically decide their own political future, not Madrid or Brussels.

• Martina Anderson is a Sinn Fein MEP for Northern Ireland, writing here on behalf of the EU-Catalonia Dialogue Platform