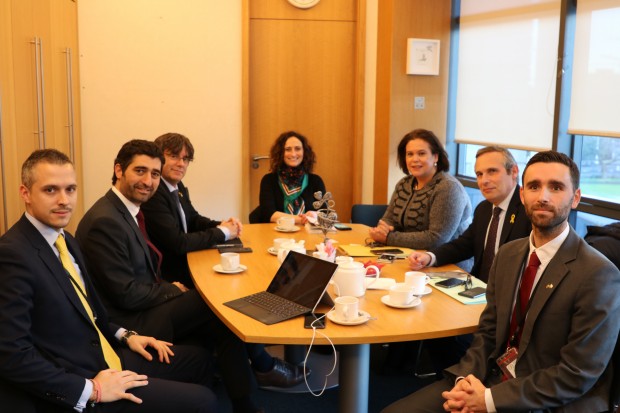 Today marks the beginning of the trial of Catalan politicians for their role in Catalonia’s 2017 independence referendum. Sinn Féin Senator and Chair of the Oireachtas Friends of Catalonia group Paul Gavan, has written an opinion piece below, calling on the Irish government to work to ensure that a political and democratic solution can be reached.

Today, after having been in arbitrary pre-trial detention for over fourteen months, nine Catalan political prisoners (six former members of the Catalan Government, the former Speaker of Parliament, and two civil society leaders) are facing a long trial before the Spanish Supreme Court. They face the grave charges of rebellion, disobedience, and embezzlement of public funds.

Their crime? To have organised or supported a referendum on self-determination, in line with the democratic mandate given to them by the Catalan people. They now risk a prison sentence of up to 25 years, since the crime of rebellion, which involves a ‘violent and public uprising’ according to Spanish law, is one of the most serious crimes in the Spanish criminal code.

Yet, the undeniable truth is that they did not use or incite any violence, as accepted by the German court which denied the extradition of former Catalan president Carles Puigdemont. Indeed, the only violence came from the brutal and shameful police response that left over a thousand voters injured.

Police officers beating people trying to exercise their democratic right to cast their ballot. This is an image we never thought we would see in Europe again.

Along with members of the EU-Catalonia Dialogue Platform in the European Parliament, I regret the repressive and judicial response of the Spanish authorities to a conflict that is political in nature. We reject the false narrative behind the accusations and we denounce use of a trial through the Spanish courts as a political instrument of repression.

Dialogue and negotiation, not imprisonment and criminal prosecution, should have been the instruments through which Catalonia’s legitimate and democratic right to self-determination ought to have been channelled.

This political trial is not an internal Spanish affair. It has a clear European dimension since it clashes with the fundamental values of the Union such as democracy, freedom of expression, freedom of assembly, and the right to political participation. Even the right to a fair trial is at stake, since the political prisoners have denounced numerous irregularities during the pre-trial phase. For instance, most of their appeals against their pre-trial imprisonment brought before the Spanish Constitutional Court have been left unheard, thereby blocking access to the European Court of Human Rights.

We should all be watching this trial closely. Catalans have a legitimate right to democratically decide their own political future. Madrid and Brussels needs politicians with the courage to settle political conflicts not with criminal charges, but with the tools of democracy.

This trial may slake the thirst for revenge of the most radical Spanish nationalists, but will certainly not contribute to a reasoned solution to the historical tensions between Catalonia and the institutions of Spain. It is necessary that European institutions continue to apply pressure. Likewise, the Irish government should not be silent on this issue and instead work to ensure that a political and democratic solution can be reached.