From the caves of Afrin will spring a revolution reborn 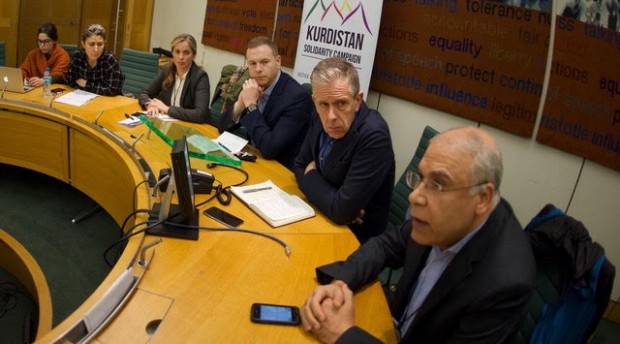 Since the fall of the Ottoman Empire the Kurdish peoples have been scattered to the furthest corners of four states - Turkey, Syria, Iraq, and Iran. In all of these states they have suffered brutal discrimination, repression and all too often they have become the hostage of regional conflicts.

With Bashar Assad’s Syrian regime facing collapse in 2012 the Rojava Revolution was emerging in north eastern Syria; as an egalitarian project of self-government began with the liberation of all races, religions, ethnic communities and women.

By January 2014 the three Rojavan cantons - Cizre, Kobane, and Afrin - had proclaimed themselves as an autonomous region. The revolutionary model - undoubtedly shaped from the political philosophy of Abdullah Öcalan - is a hybrid fusion of socialism and direct democracy.

A communalist system of participatory decision making supported by an administrative structure inclusive of each ethnic group. Christian, Assyrian, Syriac, Arab, Turkmen, Chechen, and Armenian peoples all living together with the large Kurdish majority.

It is a truly inspirational attempt to integrate different ethnic groups and religions in a single participatory egalitarian democracy that respects the individual, the community, and the environment.

Bearing in mind the traditional peasant norms of the region, remarkably the cornerstone of the revolutionary society is the elevated position of women. Child marriage has been outlawed; women are now equal to men in all legal matters; and polygamy has been banned.

A gender-based quota system for government positions has been introduced, with a corresponding co-chair system where every position has one male and one female leader.

Significantly education is also now being offered free of charge for all women. At its core the revolution dismantles traditional ideas of domination and hierarchy in every aspect of life, and in doing so it aims for the recasting of social relationships between all citizens regardless of gender or ethnicity.

It is easy then to see how many observers have drawn the comparison with the Second Spanish Republic - where the ‘Mujeres Libres’ commanded similar admiration as their Rojavan contemporaries, who undoubtedly have become the political and military vanguard of the revolution.

Indeed the similarities between the Spanish & Rejova revolutions are striking.Like Rojava today, Spain in the 1930s experimented in radical democracy spearheaded by a fraternal band of anarchists, communists and socialist republicans.

Whole cities were organised under direct-democratic management, industries fell under worker control, and the radical empowerment of women was a strong feature of the Constitution of the Second Republic.

It is little surprise then that amidst the rubble and destruction of the Syrian conflict lies a political and cultural revolution that many observers believe can be the midwife to the birth of another world.

Indeed it is this promise of a truly egalitarian society that has moved Turkey’s Recep Tayyip Erdoğan to declare Turkey’s mission is ‘to strangle the dream before it is born’. And why wouldn’t he?

The Rojava revolution with its anti-sectarian, secular democratic principles shines as a revolutionary beacon in the Middle East opposed to the feudal barbarism of Daesh and his neo-fascist Turkish state.

Erdoğan’s recent assault on the Afrin region of Rojava has electrified growing elements within Turkey who are actively pursuing an extreme Turkish expansionism; a resurrection of the Ottoman dream.

In recent weeks the widely read Sözcü newspaper violently declared that ‘we will strike them, cleanse the area and stay there permanently; we are having our second Cyprus’. The 1974 Turkish invasion of Cyprus is considered a victory and celebrated every year in Turkey - for Cypriots however they remember the invasion as an horrific occupation.

The brutal military assault on Cyprus was accompanied by mass murder, abduction, and rape of Greek Cypriot women and children by Turkish soldiers. Turkey has never been held accountable for their crimes in Cyprus; never brought to task for the torture of civilians and the campaigns of ethnic cleansing.

Safe in this knowledge they attack Afrin with a similar disregard for international obligations. Just this week Amnesty International have added their voice to the growing calls for an immediate end to the indiscriminate shelling of civilian neighbourhoods by Turkish forces.

In its defence Afrin is protected by the Syrian Democratic Forces of the People’s Protection and Women’s protection Units (YPG, & YPJ). To their eternal credit, it was these YPG and YPJ units who went boldly into the belly of the Daesh beast and suffered heavy casualties as they liberated its capital, Raqqa from islamist Jihadis in October 2017.

Shamefully they now find themselves abandoned by most of the western world as Erdoğan’s tanks and gunships line up alongside Islamist militias including Daesh and Al-Qaida veterans.

And yet the western world seem oblivious to the heroic actions of the Kurdish forces - indeed in recent years when these battalions fought their way through Daesh territory in Iraq in order to rescue thousands of Yezidi refugees trapped on Mount Sinjar, western commentators remained unmoved.

There is no doubt that in the midst of the complexities of the Syrian conflict - Erdogan’s illegal assault on the Kurdish people goes unnoticed, and unchecked by the western world.

As the great global powers sit idly by and allow their NATO partner to launch an unprovoked military assault on one of the few remaining peaceful corners of Syria, the Rojava revolution is forced to take cover in the caves and bombed-out basements of Afrin.

So whilst the lens of the Syrian conflict is currently focused on the heartbreaking scenes in Eastern Ghouta near Damascus; it should also look northwards to Afrin. For at the heart of the Rojava revolution exists a model of political governance that has the potential to secure unprecedented political stability in the Middle East.Progressives of all shades have a moral responsibility to ensure this revolution does not suffer the same fate as the Second Spanish Republic.

We must organise, we must unite in their name. For with solidarity comes strength, and from the caves of Afrin will spring a revolution reborn. And they too will defiantly proclaim ¡No pasarán!