Rally calls for the release of Ahed Tamini 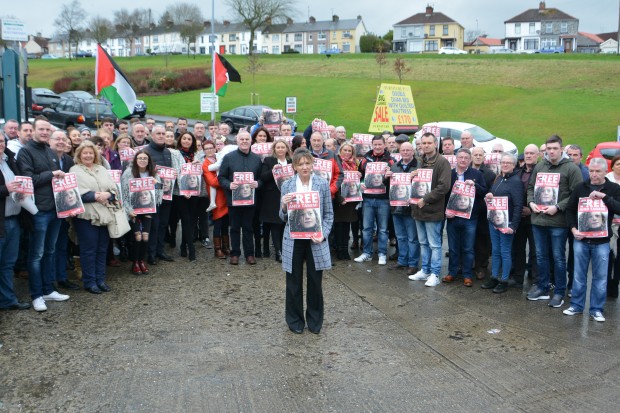 "International human rights abuse is the hallmark of what the Israelis have been doing for many, many years against the Palestinian people." - Martina Anderson MEP

Sinn Féin MEP Martina Anderson has called for the immediate release of Ahed Tamimi, a 16-year-old Palestinian girl, who is currently imprisoned by Israeli forces.

Ahed Tamimi was arrested on the 20th December during an overnight raid at her home in Nabi Saleh, a village in the occupied West Bank.

Martina Anderson addressed a large crowd at a solidarity demonstration held in Derry on Saturday afternoon. The event was organised by Sinn Féin Republican Youth.

"Ahed Tamimi is a child of 16 years of age and she is imprisoned along with hundreds and hundreds of other children in Palestine.

"International human rights abuse is the hallmark of what the Israelis have been doing for many, many years against the Palestinian people," Martina Anderson said.

The arrest came after a video of Ahed and her cousin challenging Israeli occupation forces to leave her family’s land went viral on social media.

Ahed has been charged by an Israeli military court with five counts of assault against security forces and throwing stones at the military during a protest Nabi Saleh in opposition to US President Donald Trump's recognition of Jerusalem as Israel's capital.

Earlier this week, Tánaiste and Foreign Affairs Minister Simon Coveney met with Israeli Prime Minister, Netanyahu whilst on a visit to the Middle East.

Martina Anderson has said there is a "responsibility" on Minister Coveney to act and demand the release of Ahed Tamimi and the hundreds of Palestinian children currently imprisoned by Israel.

She said: "It's important that we continue to show international solidarity with the Palestinian people. The Irish government must also implement their commitment to recognise the State of Palestine with immediate effect.

"There must be an end to be abuse of international law, the Israeli state have been able to act with impunity, whilst the European Union has stood idly by. This is not acceptable," she added.