Now is the time to deliver Irish unity 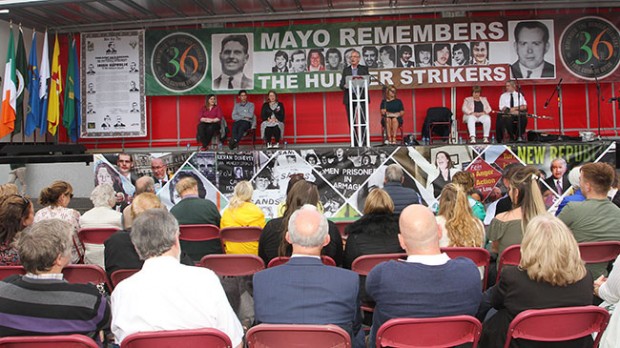 • Sinn Féin MLA Gerry Kelly, who was force-fed during 60 days on hunger strike in an English prison until his transfer to Long Kesh in 1975, gives the main address at the National Hunger Strike Commemoration

'So, Leo, Colm and Mícheál, this is the time put aside your narrow party political interests, the time for national leadership, the time to stand together to plan and deliver Irish unity'

GERRY KELLY MLA, former Hunger Striker and political prisoner in England and Ireland, paid tribute at the National Hunger Strike Commemoration to all the republican activists and their families who have given so much to the struggle for a reunited Ireland and an Irish Republic based on the principles of the 1916 Rising.

He called on the leaders of the SDLP, Fine Gael and Fianna Fáil to put aside narrow party political interests and stand with Sinn Féin to plan for and deliver Irish unity.

“Irish unity is now firmly on the political agenda.

“Sinn Féin wants an Ireland that is defined by hope, prosperity and opportunity for all citizens irrespective of their age, gender, religious persuasion, cultural identity, political affiliation, ethnic origin, or sexual orientation.

“I challenge the leaders of the SDLP, Fine Gael, and Fianna Fáil to stop hiding behind the mantra of 'now is not the time to discuss unity'. One hundred years on since 1916, as we face into Brexit, now is the time not only to discuss unity, but to plan and deliver Irish unity.

“So, Leo, Colm and Mícheál, this is the time put aside your narrow party political interests, the time for national leadership, the time to stand together to plan and deliver Irish unity.

“That is the project that can define the coming political era.

“Sinn Féin is willing to stand with all those in favour of unity.”

The North Belfast MLA said the political institutions in the North should be re-established. He said:

“We want the institutions of the Good Friday Agreement reinstated but on the basis of equality, mutual respect and integrity.

“The present talks, now stalled, are about implementing agreements already made. That is basic to a power-sharing Executive and Assembly.”

“These are not unreasonable asks for people living in the North of Ireland and especially when they are rights everywhere else in Ireland and Britain.”

Gerry Kelly said that the sacrifice of the 1981 Hunger Strikers and the IRA Hunger Strikers Michael Gaughan and Frank Stagg who died in English jails had helped make Irish republicanism stronger than ever.

“These heroic hunger strikers of our generation inspired not only fellow Irishmen and women but freedom-loving people the world over.

“Today, as a result of the efforts of these republicans there is a peaceful and democratic path to a united Ireland. The 1981 Hunger Strike led to a widening of the structures of struggle for a united Ireland, which facilitated the strengthening of republicanism to a point where we are stronger now than we have ever been in our history.” 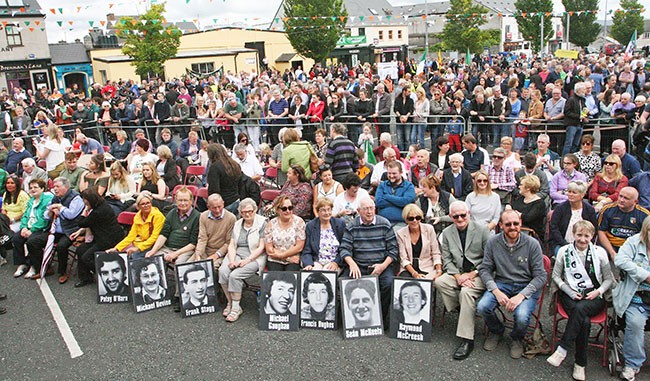 • Some of the crowd behind members of the Hunger Strikers’ families

Gerry Kelly opened his remarks by saying that he was very honoured to speak at the National Hunger Strike Commemoration, especially in County Mayo, home to Seán McNeela, Michael Gaughan and Frank Stagg, all three hunger strikers and patriots who are buried in the nearby historic Leigue Cemetery.

“It is in itself a great testimony to what County Mayo has sacrificed in the fight for Irish freedom across the generations,” the North Belfast Assembly member said. He continued:

“I would like to welcome the families of our fallen comrades who gave their lives for the freedom and independence of our country. I am acutely aware that when I speak of loss and grief that it is most deeply felt by those who knew and loved them personally.

“The 1981 Hunger Strike, in which 10 Irish republican political prisoners sacrificed their lives, came at the end of years of harrowing prison protest by the women and men in Armagh Jail and the Long Kesh H-Blocks, supported by tens of thousands of people protesting on the streets of Ireland and internationally.

“It is recognised as a hugely significant political watershed in our struggle, by friend and foe alike.”

The former Hunger Striker said it is important to say that no Irish political prisoner who pitted themselves against the might of a British Government in this way wanted to die. Nor were they naïve in such a 'David and Goliath' battle, he said.

He recalled that, a hundred years ago, Thomas Ashe fasted against the British Government demand for him to wear prison clothing or do penal work – “essentially to criminalise him, his comrades and the struggle for freedom”.

“He and his fellow hunger strikers placed the value of their lives in support of their just demands to be treated as political prisoners. He was the first Hunger Striker to die and became the inspiration for political hunger strikers since.

“When the British Government decided 56 years later to use force-feeding against political prisoners in English jails it was Michael Gaughan’s death which brought an end to its use in Britain.

“By the time Michael Gaughan and Frank Stagg went on hunger strike in 1974 there had been a large number of deaths of Irish republican prisoners, after Tom Ashe, including Seán McNeela’s comrade, Tony D’Arcy from Galway.

“The hunger strike which we embarked upon in jails in England after sentencing in 1973 was for transfer to jails in the North of Ireland to be treated the same as our comrades there.

“The Price sisters, Michael Gaughan, Frank Stagg, myself and others were on that hunger strike.

“Michael, like Thomas Ashe, died not of starvation but of force-feeding. He died on 3 June 1974. His friend, Frank Stagg, was given commitments by the British administration. They reneged on them, forcing Frank on to a number of hunger strikes which culminated in his death on 12 February 1976.

“While I and other comrades were on hunger strike at the same time as Michael and Frank, I never met either man as the prison authorities made sure to separate and isolate protesting prisoners in English jails.” 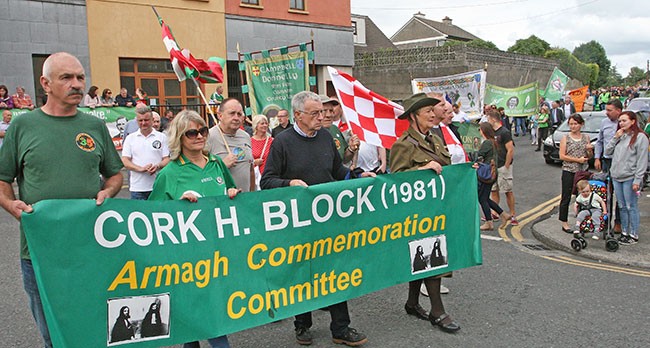 Gerry Kelly said that when the 1981 Hunger Strike began, Bobby Sands knew the odds were stacked against him but “as our late, great friend, comrade and leader” Martin McGuinness said of the hunger strike:

“The 1981 Hunger Strike destroyed Britain’s strategy to criminalise the IRA and the republican struggle.”

“Neither was Frank Stagg or Michael Gaughan. And neither will our struggle and our political strategy.

“They proudly take their place alongside Pearse, Connolly, Clarke and the rest of the signatories of the 1916 Proclamation – they were the history-makers of our generation. They are the people who have set the moral compass for the rest of us to aspire to.”

If courage was the measure of success then Ireland would have had her freedom many generations before now, the former IRA activist said.

“Volunteers in the IRA knew that our opponents and enemies had to be faced up to in every single sphere of life – whether it was by being in the civil rights movement or fighting against discrimination in housing or unemployment, or fighting for and learning the Irish language or protecting our culture, or creating jobs or building communities or dealing with social problems.

“The activists we are remembering here today were proud republican Volunteers who took up arms against a massive military machine when there was no other option. But they were not war-mongers.

“These same activists had the courage and commitment to embark on the passive protest which is hunger strike. They risked their lives and sacrificed themselves for others.”

Path to a united Ireland

He said that today, as a result of the efforts of these republicans, there is a peaceful and democratic path to a united Ireland.

Laying down his challenge to the SDLP, Fine Gael, and Fianna Fáil to stop hiding behind the mantra of ‘now is not the time to discuss unity’, Gerry Kelly insisted:

“100 years on since 1916, as we face into Brexit, now is the time not only to discuss unity but to plan and deliver Irish unity.

“There is no short cut to a united Ireland. We have to prepare for it and that’s exactly what we have been doing and continue to do – North and South, East and West.”

The Sinn Féin figure said that Irish politics is undergoing its biggest shake-up since partition.

“We are at the core of that change. This is about you, your family, your hopes and your ambitions.

“It’s about taking your country’s future into your own hands; your opportunity to decide on our future.

“It’s time as a nation to believe in ourselves. If not us, then who? If not now, then when?

“We are now in a phase of nation building. What Connolly called ‘the re-conquest of Ireland by the Irish people’. That requires building the political clout to bring about fundamental change.

“Let us send out this political message – not only have we not gone away but we are getting stronger by the day.”