The SDLP Lost in Space 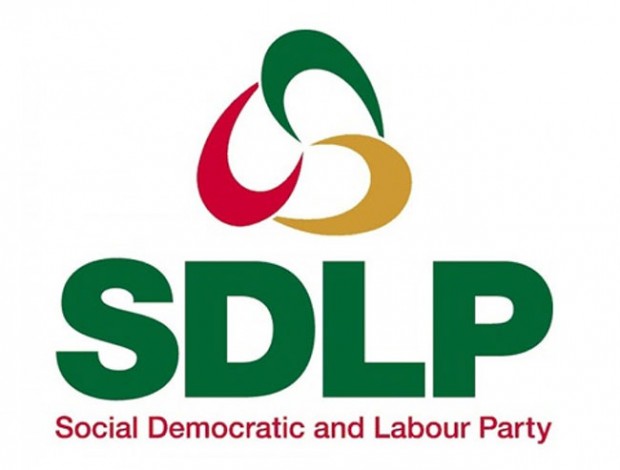 CENTURIES AGO, people believed that the Earth was the centre of the Universe, that the Sun rose and set around our world because it was ‘set in place by God’.

Galileo, the Italian scientist and philosopher, took a different view – that the Sun was the centre of our Universe and it was around this planet that the Earth rotated. (His views led to his interrogation by the Roman Inquisition of 1615 and his subsequent house arrest.)

It was while reading various opinions on the new film about former SDLP leader John Hume and subsequent commentary on the work that the story of Galileo came to mind.

In terms of Irish politics and history, particularly since the 1960s, the Irish, British, mainland European and US political establishments saw Hume in pre-Renaissance terms.

They believed John Hume to be the centre of the Universe, the ‘Earth’ that everything political in the North revolved around.

And as those who branded Galileo a heretic because his scientific findings were contrary to biblical teachings, so too Hume’s pronouncements were treated as if they were sacred texts set in stone.

The tone for the commentary on this year’s documentary film, In the Name of Peace: John Hume in America, is set by Donald Clarke writing in the Irish Times.

The Irish Times then cites the “inestimable” Eamonn McCann (coincidentally a fellow Irish Times columnist) bemoaning that, in his esteemed opinion, “the Bogside has become a tourist attraction”.

“I listened in to one of these guys giving schoolchildren from southern Ireland an account of a history of the Bogside in which John Hume didn’t figure until the Hume-Adams Talks.

“That’s the level of distortion of history which supporters of the IRA are involved with. They have to. They can’t kill the truth,” the Trotskyist ‘revolutionary’ opined.

Likewise, SDLP leadership hopeful and South Belfast MLA Claire Hanna clams that the film corrects “quite a lot of revisionism . . . Particularly in Sinn Féin, who are now pitching themselves as peacemakers”.

The film on John Hume’s political life comes at an interesting juncture in Irish politics, particularly after the results of the last two Northern elections which has left Hume’s once imperious SDLP’s electoral survival hanging by a thread.

It is ironic that the unionist and British state ideological onslaught against Sinn Féin and republicanism centering on accusations that the party is “re-writing history” should now find its way into the lexicon of Sinn Féin’s political rivals within the nationalist community.

And for all his left-wing rhetoric and appeals to the unionist working class, Eamonn McCann knows that the Socialist Workers’ Party’s electoral wing, People Before Profit, gets the vast majority of its votes from within the broad nationalist community.

So while Fitzpatrick’s film has set out to put Hume’s personality and political presence back to the centre of the political universe, the reaction of the SWP’s McCann and the SDLP’s Hanna in particular tells us that there is a serious battle for the hearts and minds of the nationalist, republican and politically progressive community.

For the SDLP, however, that battle is a battle for survival.

Their attacks on Sinn Féin (including their alliances with the Ulster Unionist Party under Mike Nesbitt which saw them withdraw from the North’s Executive and go into ‘opposition’ and which many seem to gloss over) are indicative of a party thrashing around in the dark rather than moving through a calculated, thought-out strategy to address electoral reversals.

The turn to Sinn Féin

The SDLP is past its sell-by date. The fact that Northern nationalist voters turned to Sinn Féin in June’s Westminster election and delivered an emphatic ‘No’ to the SDLP is proof of that.

The party lost its three seats which were all held by former leaders: Mark Durkan, Margaret Ritchie and Alasdair McDonnell.

Chris Hazzard took South Down for Sinn Féin, defeating Margaret Richie in a constituency whose electorate was emblematic of an SDLP that was middle-class Catholic and soft unionist despite its ‘nationalist’ label.

Elisha McCallion’s surge in Derry that removed Mark Durkan, however, was as emphatic a statement about history and Sinn Féin passing the SDLP by as any.

The SDLP made representation in Westminster and Sinn Féin’s republican abstentionist principle central to their manifesto and media appearances. Their argument, articulated by Irish News columnist and former SDLP spin doctor Tom Kelly OBE, was that “confronting” British ministers “across the floor of the House” was effective. Kelly also argued that, by their non-attendance at Westminster, Sinn Féin MPs were conceding the ground on Brexit to the DUP. 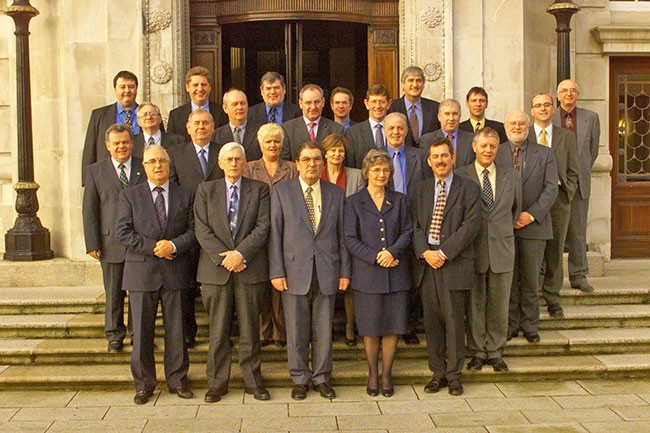 In the past year since the Assembly election in May 2016 and the Brexit referendum in June, the political dynamic in the North has changed – and changed dramatically.

Sinn Féin had a disappointing 2016 Assembly election, dropping a seat and seeing its percentage of the vote slip by almost 3%, especially as expectations were high with a buzz around the centenary celebrations of the 1916 Easter Rising.

And despite the Brexit vote to leave the EU, the fact that a majority in the North voted to remain has opened up opportunities for republicans to push for a Border poll.

This call was widely rejected by unionists and in particular the DUP. Under Arlene Foster, many in the DUP seem to have openly reverted to the old traditions of the ruling unionist class who effectively would rather not “have a Catholic about the place”.

Bolstered by her 38-seat tally in the Assembly election, Foster’s ministers rolled back Sinn Féin initiatives on the Irish language. In a consistent abuse of the Petition of Concern, they have repeatedly blocked the introduction of marriage equality legislation. (Ironically, the Petition of Concern is a device included in the Assembly procedures designed to protect minorities.)

Then the DUP found themselves embroiled in the Renewable Heat Initiative (RHI) scandal.

The late Martin McGuinness felt he had no choice but to resign and the Assembly collapsed. Arlene Foster (whose wearing of a substantial diamond crown brooch in her public and TV appearances seemed to say ‘I am Queen of the North’) was not as assured as she had been.

She blundered through the snap “Crocodile” Assembly election in March this year. The result left her on the ropes, only to recover her ground in Tory Prime Minister Theresa May’s misjudged June Westminster election.

And with the DUP propping up a weakened Tory Government, Foster is once more cock-a-hoop, with her regal demeanour and self-aggrandisement telling its own story.

She sees her position now as one wherein ‘the Union’ is secure. 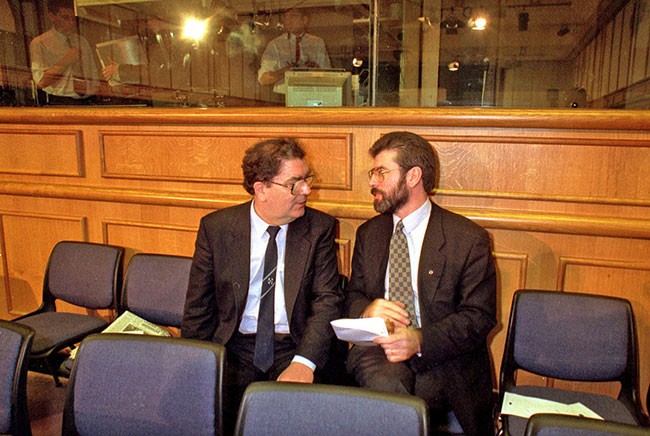 Appetite for a Border poll

The appetite for a Border poll, under the terms of the Good Friday Agreement, seems to be going hand in hand with voters supporting Sinn Féin’s stance in the talks to re-establish the Assembly and agreeing that, as Martin McGuinness said, there cannot be a return to the Stormont status quo.

The shallow SDLP thinking that the solution to the conflict lay simply in ‘reconciliation’ rather than ending partition and a new political dispensation based on equality has been trotted out by Claire Hanna and the editors at the Irish Times.

“Perhaps the biggest failing is actually touched upon in the article about the documentary when Fitzpatrick claims that Hume nailed his colours to the mast and defined the problem as being about reconciliation. Hume hammered this point home for years with what journalists unkindly described as ‘his single transferrable speech’. But seeing the solution lying in reconciliation is a bit like a doctor treating the symptoms of a disease but refusing to tackle the causes.”

The reality is that the civil rights campaign of the 1960s came about because of the discrimination practised by the Unionist Party perpetually in power at Stormont since partition – and allowed by governments in Westminster.

The IRA’s armed struggle was an inevitable consequence of the violent response of, first, the unionist regime and then the British Government's political and military attempt to put those nationalists and republicans who stood up to them back in their place.

The SDLP never got that. They constantly misdiagnosed the problem and put the blame on republicans.

That Hume was hailed as the Irish politician of his era had more to do with the objective political needs of the British and Irish establishments who used the SDLP as a bulwark against radical republicanism.

And it is worth remembering that when Hume met with Gerry Adams in the late 1980s, senior members of his own party, exposing their pro-unionist slips, disagreed with him as they were happy to go along with the ‘isolate Sinn Féin’ strategy of successive British governments.

Eamonn MacDermott spells out that it is the British Government’s continuing interference in Ireland that perpetuates the division and political conflict created by partition and the gerrymandered state based on repression and division.

“The need for reconciliation in the North stems from the unequal positions of the two communities, and that inequality in favour of unionism is created and bolstered by the British presence.

“As long as there is a British presence then unionists (and this has been borne out by events even to this day) see no need to treat their nationalist neighbours as equals.

“To get real reconciliation needs more than fine speeches – it needs the removal of whatever it is that creates that inequality, in other words the British presence.”

The point is that Sinn Féin or republicans are not rewriting or revising history. It is just that with a united Ireland becoming more of a possibility as the old myths are being stripped away, the SDLP have no hiding place – and they know it.