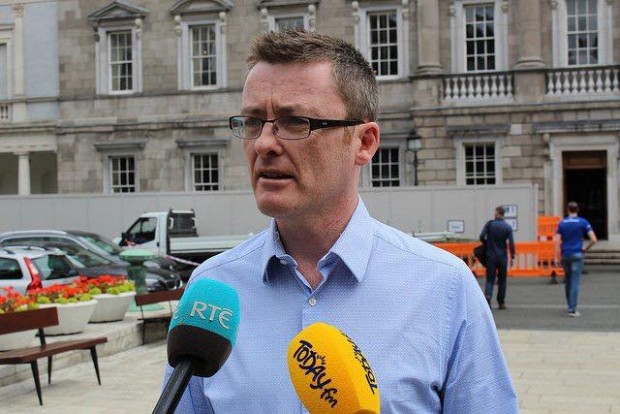 ● David Cullinane TD: Anyone who believes that Brexit is not going to be bad for the island of Ireland is ‘living in Cloud Cuckoo Land’

‘No other viable proposition has been put on the table’

THE BEST WAY to maintain free movement and trade across the island of Ireland for everyone is for Special Designated Status for the North Within the EU, Sinn Féin TD David Cullinane said on Wednesday. The party’s spokesperson on Brexit was speaking at the Dáil soon after the British Government published a “position paper” on how it saw Ireland post-Brexit.

Anyone who believes that Brexit is not going to be bad for the island of Ireland is “living in Cloud Cuckoo Land”, Deputy Cullinane said.

Ireland, North and South, should not be “collateral damage in a turf war between rival factions in the Tory Party” and nor should the North become a bargaining chip for the Conservative Party with the EU, he said.

He reiterated that the majority of people in the North voted against Brexit, including many unionists, and their vote should be respected.

The DUP, he said, have “given a blank cheque” to the Tories in power in England even though there are many unionists in the business and farming sectors as well as the wider community fearful of the consequences of former Prime Minister David Cameron’s failed gamble on calling a referendum on membership of the EU to quell party in-fighting.

The Sinn Féin spokesperson on Brexit told reporters at the Dáil that he welcomed the Irish Government’s rejection of “half-baked Brexit plans” floated by the British Government for “the nonsense they are”.

“The notion that you could have a frictionless, open border on the island of Ireland while at the same time having an EU frontier is the stuff of fantasy,” Deputy Cullinane said. 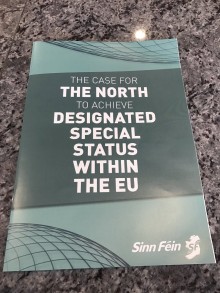 He said that Sinn Féin doesn’t want any border in Ireland, or any EU frontier, and it is “quite clear” from what the Irish Government is saying that the solution is for the North to get Special Status Within the EU as endorsed by the Dáil.

David Cullinane welcomed the statement from Foreign Affairs Minister Simon Coveney that “we need new political thinking”, rejecting many of the suggestions of the British Government. The Irish Government now needs to pursue “the only viable solution – Special Status for the North Within the EU”, he said.

“No other viable proposition has been put on the table.”

The Waterford TD said that Sinn Féin are not “signed-up fans of everything the EU does”. The party, he said, wants EU reform as part of its “critical engagement” with the institutions in mainland Europe.

“But we recognise that having the entire island of Ireland in the EU, in the Customs Union, and making sure that we don’t have any type of border that has restrictions in the movement of goods, services and people or consequences for the Good Friday Agreement is in our interests.”

Of those who argue against Special Status, he asks:

“What’s the alternative? An EU frontier running through the island of Ireland and measures that are bad for business, bad for farming and bad for families?”