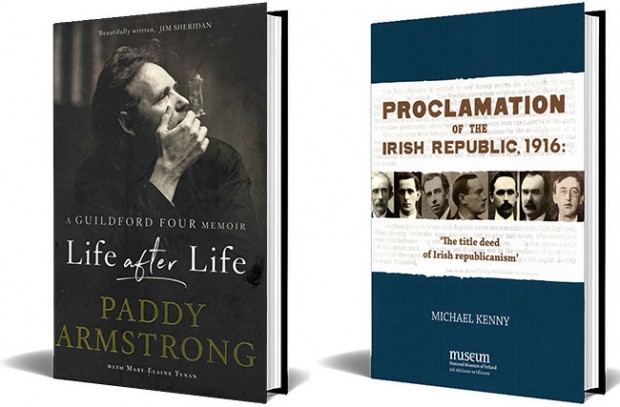 Paddy Armstrong’s words speak from every page. The sheer humanity and decency

THE LIST of miscarriages of justice stemming from the conflict in the North is so extensive it could fill a book all by itself – just the list, never mind any analysis of each individual case.

The sheer scale of prosecutions and inevitable convictions carried out on an industrial scale serves to normalise the process and deaden the public response to a rigged judicial system and mass incarceration. And yet, despite this numbing of public perceptions, some cases are so blatantly reprehensible that the public conscience is jolted from its apathetic acceptance to question the entire process.

The two most notable examples are ‘The Birmingham Six’ and ‘The Guildford Four’. This book is the story of Paddy Armstrong and its great strength is that it defines him as an individual in his own right and not merely as a cipher as one of the Guildford Four.

The book is divided into three distinct parts: Paddy Armstrong’s childhood and upbringing on the Falls in 1960s Belfast; his arrest, torture, trial and patently wrongful imprisonment for the 1974 Guildford bombings by the IRA; and his eventual release and catharsis, finally ending as a contented house-husband and father in suburban Dublin.

This is a very finely-crafted book and, although it is ghost-written, it is done so sensitively. It is Paddy Armstrong’s words that speak from every page. The sheer humanity and decency of the man is palpable and evident throughout.

The book is full of poignant and searingly emotional passages. From the death of his two-year-old baby sister to the more recent deaths of two of his fellow Guildford Four co-accused, Gerry Conlon and Carole Richardson, the writing manages to convey the triumph of the human spirit over tragedy.

Paddy Armstrong is the last of the Guildford Four to write about his experiences, and he does so with magnificent candour.

One of the most moving passages describes his actions on the first day of his release when, unable to sleep in a soft comfortable bed, he is forced to drag the mattress to the floor. The next morning, Paddy sits in the room for hours, until his concerned hostess comes looking for him because he did not realise that he had the authority to open the door or leave the room without permission.

This book is essential reading to appreciate the lengths the state will go to in order to protect its interests. It is also a testament to the indomitable nature of some individuals caught up in conflict not of their making.

Our Declaration of Independence

THIS is a beautifully-illustrated and easy read about that seminal document, the Proclamation of the Irish Republic which was read outside the GPO on Easter Monday 1916.

Michael Kenny explains in the historical background section that it wasn’t the first such proclamation. The United Irishmen of 1798, Robert Emmet and the Fenians all issued declarations and proclamations. The first proclamation of an Irish Republic I have come across is one in 1626. Another not mentioned was the 1868 Supreme Council of the Irish Republican Brotherhood proclamation. His short chapter captures the similarities between these documents that are still visionary today.

After the centenary celebrations and commemorations of the Rising last year, many young people in particular will be interested in how the Proclamation was written, prepared, signed and how James Connolly was the one who got it printed in Liberty Hall after he and Thomas MacDonagh read it to the two compositors and printer who were tasked with the job. (There is a lovely photograph of the trio in Michael Kenny’s book.)

They worked away on Easter Sunday with a detachment of the Irish Citizen Army standing guard.

Helena Molony was tasked then with the distribution of the 2,500 copies printed. She slept on them, armed with a revolver until the time to issue them came. Helena and Connolly distributed them among Volunteers and Citizen Army members who proceeded across the city with them to paste them at 12:45pm as Pearse was reading it out aloud at the GPO.

All the intricacies and peculiarities of the printing process, the errors, the wrong fonts are all illustrated and explained in simple terms and brings to life the pressures the men printing it were under. Also included are photographs of the original letters, the trestle table on which it was set out, proof-read and piled up on before it was issued to those who would paste it around the city.

It’s a book well worth a read for republicans, enthusiasts of 1916 and young students of history and a gift at €8