The slow death of Brazil’s Guarani-Kaiowá 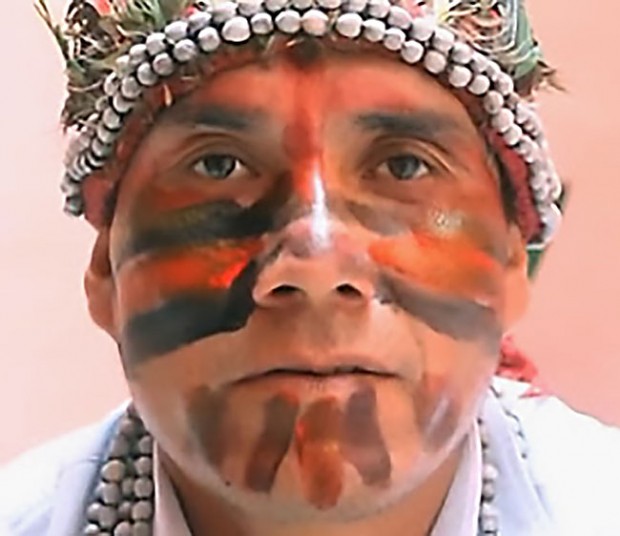 The Guarani-Kaiowá lived in this area for more than 2,000 years until the Portuguese and Spanish colonists subjected and enslaved them

SINCE EUROPEANS first began colonising the Americas in the late 1400s, indigenous communities have faced the brunt of their unquenchable demand for land, minerals and cheap, expendable labour.

Many people may conjure up images of the Amazon and isolated regions holding out against modern colonisation when they think of indigenous communities in Latin America but that doesn’t show the full picture.

In Brazil, for example, there are no fewer than 220 ethnic different groups who speak as many as 180 languages spread throughout the country but 98.6% of legally demarcated indigenous lands are in the Amazon region.

While this fulfils an important role by protecting the way of life of these peoples and the biodiversity of this incredible terrain, 52% of the indigenous population in Brazil live outside this same region. These communities have limited or no access to their ancestral land and this has led to painful and bloody territorial disputes.

While many indigenous communities in the Amazon region are struggling to remain on their ancestral land, in the State of Mato Grosso do Sul, the Guarani-Kaiowá are striving to regain theirs. 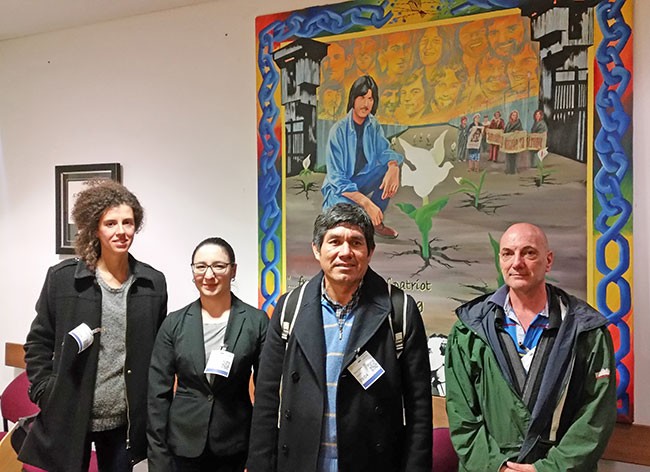 Ladio is also a history professor who graduated from the Federal University of the Great Dourados but he lives as a peasant in his community.

I first heard Ladio speak at an event in Dublin organised by the Latin American Solidarity Centre earlier this year as part of LASC's annual Latin American Week, which this year focused on the dangers to environmental human rights defenders in the region. I also met with him in Leinster House alongside Sinn Féin Senator Fintan Warfield.

Ladio came to Europe to draw international attention to the difficulties faced by the Guarani-Kaiowá and to denounce the slow genocide of his people.

Mato Grosso do Sul is a state in the south-west of Brazil that borders Paraguay and Bolivia. The total land area is 357,125 square kilometres (137,891 square miles), making it roughly the same size as Germany.

The Guarani-Kaiowá lived in this area for more than 2,000 years until the Portuguese and Spanish colonists subjected and enslaved them. 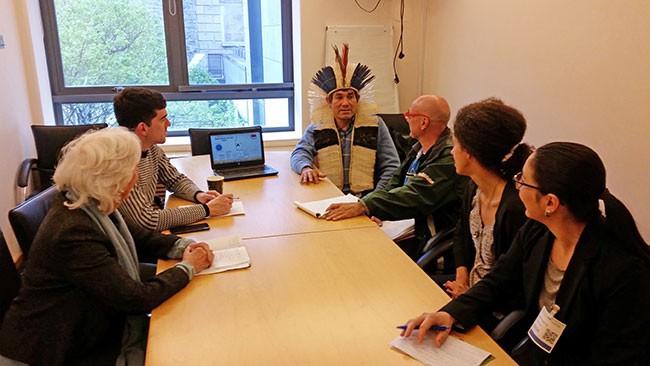 After independence, the Brazilian Government forced them to exist in small, demarcated areas so as to exploit their vast and fertile lands.

Their sacred beliefs, traditional customs and their language have been suppressed and their rights trampled on.

From the 1950s onwards, the Government has ruthlessly intensified the cultivation of sugarcane and soybean in the region and handed over huge tracts of land to unscrupulous landowners and agro-industrial farms. Farmers and ranchers were given titles of ownership to these properties without any agreement from the indigenous people.

The Guarani-Kaiowá were brutally forced from their traditional lands and onto smaller and smaller plots of land.

The cultivation of sugarcane and GM soybean crops require the intensive use of pesticides that has contaminated the rivers and the soil of their ancestral land. This is acutely painful to the Guarani-Kaiowá and other indigenous communities in Brazil who have been important guardians of nature.

It has forced Ladio’s community to survive without the necessary conditions to plant their crops, hunt, fish, or access medicinal herbs with which they treat themselves, preventing them from living in accordance with their customs.

The 1988 Brazilian Constitution granted the Guarani-Kaiowá and other indigenous communities some of their historical territory but successive governments have failed to honour their obligations and implement the demarcation process.

Ladio explained how a lot of the Guarani-Kaiowá, including his own community, are forced to live in small encampments built on the side of the road and beside the fences which have been erected to stop them reoccupying their land. They have no ability to farm or provide for their families. The conditions have led to malnourishment and disease.

Recent research carried out by two NGOs (FIAN Brazil and CIMI) has revealed that the rate of chronic malnutrition within Guarani-Kaiowá communities amounts to 42%. This compares with a National Survey on Health and Nutrition of Indigenous Population which found that average chronic malnutrition rates among indigenous children nationally is 26% and 5.9% for non-indigenous children.

Two hundred years ago, the Guarani-Kaiowá occupied an area that represents 25% of the present State of Mato Grosso do Sul, what they call “Tekoha” – their sacred territory.

Today, the Guarani-Kaiowá are only demanding 2.5% of this territory.

Yet if they attempt to scale the fences and return to their land, incredible violence awaits them, including beatings, kidnappings, torture, rape and murder.

Ladio came to Ireland and Europe at great risk to his own safety and he has received death threats for doing so. These are not idle threats. Ladio’s father, Marco Vernon, came to Ireland in the year 2000 to denounce the abuses that his community faced in their attempts to regain their land -– he was subsequently murdered by the employees of a cattle rancher who had stolen land from the Guarani-Kaiowá.

As Ladio was following in his father’s footsteps it was an emotional and difficult visit to Ireland but he is a natural leader and he was determined to come here to denounce the genocide of his people.

The international legal definition of the crime of genocide is found in Articles II and III of the 1948 Convention on the Prevention and Punishment of Genocide.

It states that there must be an “intent to destroy, in whole or in part, a national, ethnical, racial or religious group”. There must also be a physical element, and this includes the killing of members of the group, causing the group physical or mental harm, and deliberately inflicting on the group conditions of life calculated to bring about its physical destruction in whole or in part.

It is therefore clear why Ladio and the Guarani-Kaiowá are claiming that they are the victims of an ongoing genocide. It is a slow genocide but the ultimate aim is to wipe out these proud and strong people because the expulsion from their lands means their gradual death as a people and culture. 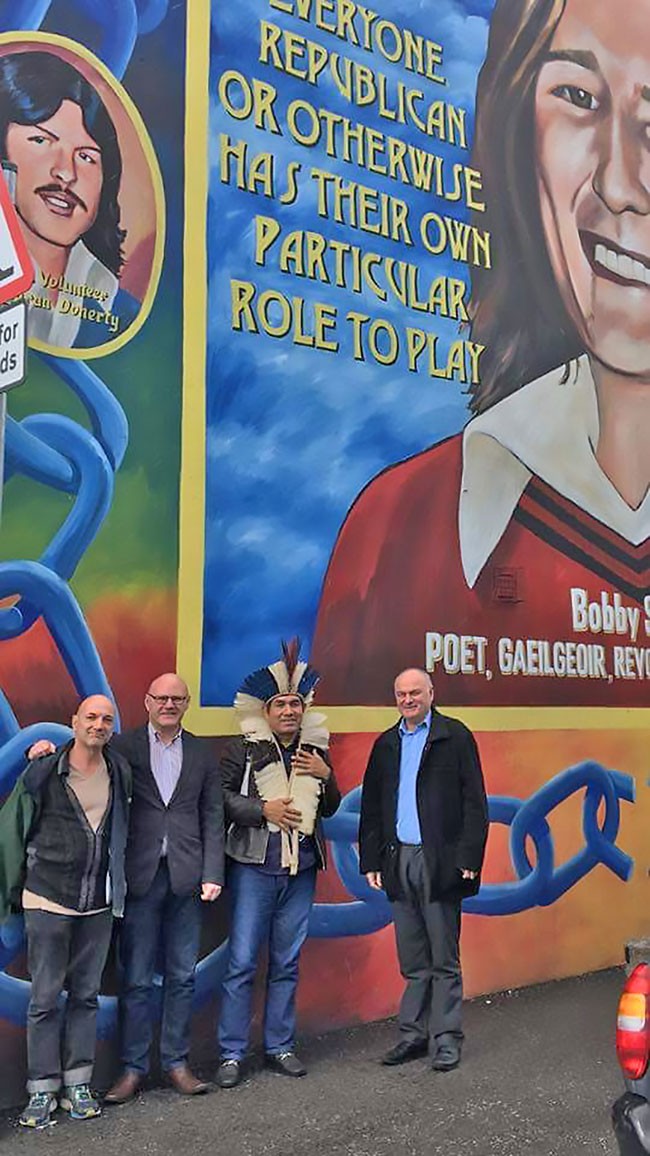 Ladio told me that the Great Council of the Guarani-Kaiowá Assembly has stated:

“The lack of demarcation is a reason and a motivation for our genocide. The ineptitude of state guarantees means more deaths and difficulties for the survival for our people.”

As long as lands that have been demarcated and officially recognised as indigenous lands remain in the hands of non-indigenous people, it is apparent that there will continue to be conflict.

The Guarani-Kaiowá and others just want what is legally entitled to them.

In response, the landlords and agri-businesses have attempted to crush any resistance to their rule.

Land conflicts between desperate indigenous peoples trying to reclaim their lands before they are lost and polluted forever have already caused the deaths of 891 indigenous people in Brazil between 2013 and 2017, of which 426 were in Mato Grosso do Sul. These assassinations of indigenous activists happen with total impunity.

Faced with the threat of their total annihilation, the Guarani-Kaiowá are calling on the international community to stopped this genocide.

Unfortunately, the situation in Brazil is getting worse.

In January 2017, the unelected right-wing government led by Michel Temer (which took power in what many have denounced as a coup) issued a decree that alters the demarcation of indigenous lands. This decree allows the Justice Department to freeze the delimitation process to review the validity of the already-demarcated lands.

Additionally, elements of the Brazilian Congress are proposing a constitutional amendment to make the demarcation of indigenous lands the responsibility of Parliament. This would be a disaster for indigenous communities because, of the 594 members of Congress, 207 directly represent the large agricultural industry.

If this amendment is approved, today’s indigenous areas, as limited as they are, could be drastically reduced. This will cause further deforestation, and the criminalisation and murder of indigenous people.

The Guarani-Kaiowá have simple and just demands.

They want to live in their ancestral territory, to live according to their culture, customs and language, cultivating their crops and hunting, while respecting and preserving nature. Yet they are being killed with impunity for standing up for their rights and slowly dying in makeshift camps on the side of the road while the wealthy elite gets even richer by exploiting and destroying their ancestral land.

Ladio’s hope is that the international community will not impassively allow the annihilation of his people if they know what is happening.

It is up to Irish republicans and other progressive voices to raise their voices with those of the Guarani-Kaiowá.