Calls for action by Irish Government and EU

‘For half a century, Israel has continued to deny Palestinians their freedom and basic human rights in complete disregard for international law and United Nations resolutions’ – GUE/NGL MEPs

TO MARK the 50th anniversary in June of Israel’s military occupation of the West Bank, including East Jerusalem and the Gaza Strip, the GUE/NGL Group of MEPs in the European Parliament reiterated its solidarity “with the Palestinian struggle for freedom, justice and equality” and called for the EU to take immediate action in three particular areas:-

•Suspend the EU-Israel Association Agreement in harmony with its Article 2, until Israel respects human rights;

•Implement a ban on the import of products originating in Israeli settlements;

•Prosecute in European courts all Israeli settlers with dual EU citizenship who are suspected of violence against Palestinians.

The GUE/NGL Group – which includes Sinn Féin MEPs Lynn Boylan, Liadh Ní Riada, Matt Carthy and Martina Anderson  (Martina is also a member of the European Parliament’s Delegation for Relations with Palestine) – said in a statement:

“For half a century, Israel has continued to deny Palestinians their freedom and basic human rights in complete disregard for international law and United Nations resolutions.

“Instead of ending the occupation – as demanded by the international community – Israel has taken concrete steps to make the occupation permanent by moving approximately 650,000 settlers into 125 settlements and 100 ‘outposts’ in the Occupied Palestinian Territory (OPT) while retaining almost exclusive control over land and natural resources.

“In addition, Israel has illegally annexed East Jerusalem and the occupied Syrian Golan Heights, built an illegal wall inside the West Bank and kept, for over a decade, the Gaza Strip under blockade.

“Two sets of law apply to Israeli settlers (civil law) and Palestinians (military law) residing in the same territory. Many respected commentators and lawyers have described this situation, where Palestinians are even prohibited from using certain roads reserved only for settlers, as apartheid. Just as the world came together to force an end to the apartheid regime in South Africa, the international community must unite to end Israel’s occupation of Palestinians with similar means.”

GUE/NGL said that the persistence of the occupation, and the impunity afforded to Israel by European countries, have fuelled global instability.

“It is now more urgent than ever that the EU takes action to force Israel to comply with international law and human rights based on an agreed and just two-state solution.” 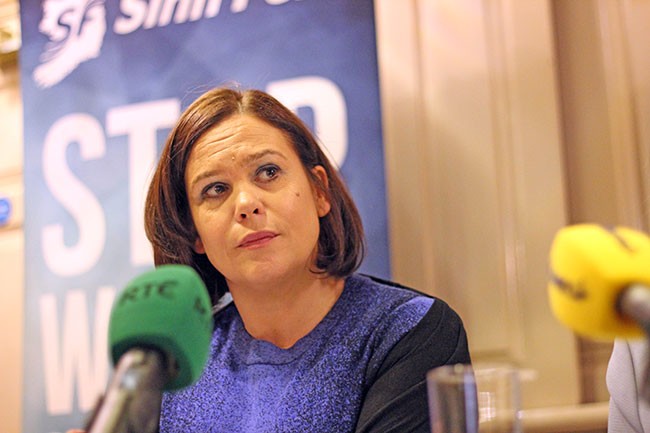 She repeated the party’s demand that the Irish Government act upon the Oireachtas motion tabled by Sinn Féin three years ago to recognise the State of Palestine.

“We are here outside the Israeli Embassy to say with one voice that we demand justice, peace, nationhood and basic rights for the Palestinian people in their homeland,” the Sinn Féin deputy leader said.

“We are 50 years on from the annexation of Gaza, the West Bank and East Jerusalem and we have had 50 years of injustice. It has to end.

“Ireland is a country that knows a lot about colonisation and dispossession because we suffered it here too. So I think that Ireland should lead in the demand for justice for Palestine.