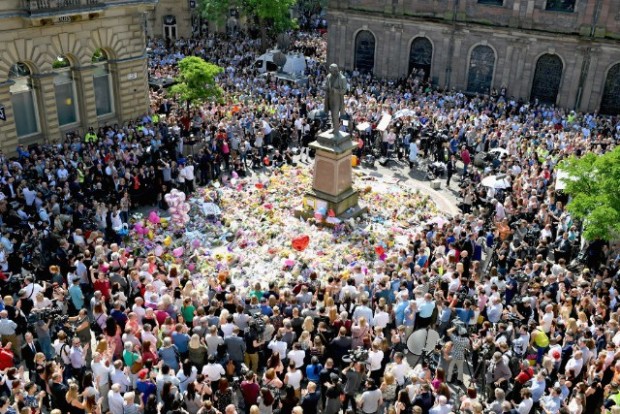 A memorial service for victims of the Manchester Arena bombing.

Whether in Manchester, Ireland or in some other global conflict zone all hurt, suffering and grief is the same and warrants acknowledgement with sincere remorse.

THE BBC NEWS on Wednesday night broadcast a report on victims of the Manchester bombing. The reporter concluded his piece with the following poignant words:  “Look into these faces, and youth and optimism beam back at you.”

That sentence captures the full impact and the human devastation caused at Manchester with the killing and injury of so many children, teenagers and young adult people.

What happened in Manchester was mass murder. It occurred at a time of apparently growing numbers of indiscriminate attacks against innocent civilians across mainland Europe.

These actions seem to be designed to provoke mass hysteria and repressive reactions from the states which have been targeted.

This is an era of unprecedented global instability, particularly within the Middle East, Asia and Africa.

The divide between rich and poor, and inequality is growing in both the Northern and Southern hemispheres. Children are dying everyday as a result of malnutrition, drought, hunger and poverty.

Global extremism in the form of violent fundamentalist sectarianism, and right-wing populism and xenophobia has been on the rise.

The so-called Islamic State or ISIS is one example of this trend.

Mass murders of innocent children in Europe are mirrored by similar atrocities taking place continually in places like Yemen, Syria, Iraq and Afghanistan. Many people will draw inevitable parallels between the recent attack upon children in Manchester and the indiscriminate killing of children in Gaza.

The terrible events taking place in the Middle East and elsewhere are the consequence of historic and present day Western powers’ imperial and colonial expansionism and interference.

The phenomenon of ISIS personifies a total violation of human dignity and democratic norms.

Its claim of responsibility for the Manchester massacre has been rightly condemned from across the political spectrum. Perversely some in Ireland have tried to cynically exploit this tragedy to mount gratuitous political attacks against Sinn Féin.

There is no justification for what happened in Manchester.

This atrocity must refocus our collective responsibility to develop a better world, based on global peace and solidarity; free from poverty and injustice; and, in which young people can thrive and prosper on the basis of equality and inclusion.

There is no distinction between the carnage and suffering which results from all wars.

Acts of war can never be romanticised regardless of the wider context in which these occur.

The battles of the Somme, and Messines, the massacres at Auschwitz and carpet bombing of Dresden, the use of atomic bombs at Hiroshima and Nagasaki, and, the invasion of Iraq were all horrific events caused by the decision of governments.

In the Irish context no right-thinking republican has ever glamorised war, or indeed the actions of the IRA, in this or any previous generation. There was never a ‘good old IRA’ as some of the Irish revisionists purport to suggest.

To assert that a political context forced the use of armed struggle as a last resort, cannot disguise the massive human suffering caused by IRA actions.

The IRA leadership said that publicly in 2002. 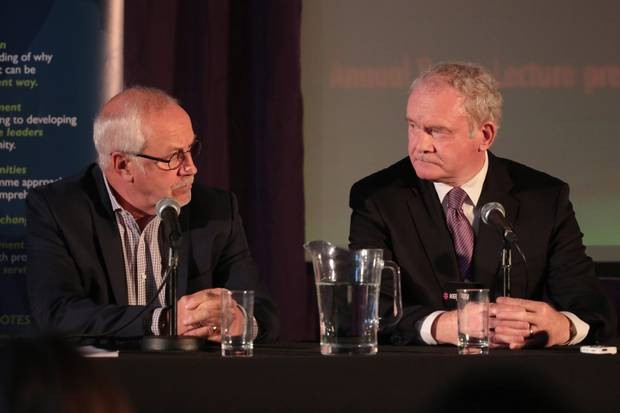 Expressing remorse and regret for death and injury during the political conflict could move us all close to a healing process.

That should not be confused or devalued with attempts to seek repudiation of political responsibility or allegiance.

There were different sides in the Irish conflict and there are multiple narratives.

There are issues about our past upon which we will have to agree to disagree.

Demanding republican repudiation of the IRA is just as futile and counterproductive as seeking unionist repudiation of British state forces and the RUC.

The reality for republicans is that armed struggle became the only option to oppose the repression and injustices of the unionist state and reintroduction of British direct rule.

So I and other republican leaders will not hypocritically try to distance ourselves from the consequences of the armed struggle.

Whilst we might wish it could be otherwise, the past cannot now be undone or disowned by republicans. Myself, Gerry Adams and the late Martin McGuinness have said so in specifically addressing tragic events, such as the Shankill bomb, Kingsmill, Tullyvallen or Darkley.

Martin McGuinness stated  in a visit to Warrington in 2013 that he could and would not attempt to excuse the human loss and death of young Tim Parry and Johnathan Ball who were killed in an IRA bomb in that city in 1993.

In August 2015 I expressed sorrow for the pain experienced by the RUC family during the conflict; the human tragedy caused to the unionist section of our community; and equally for the pain of the families of IRA volunteers killed; as well as many nationalist civilians killed and injured during our conflict.

In Ireland, hurt was caused on all sides. There was and is no hierarchy of victimhood or humanity.

That is the actual context within which the heartfelt sympathies extended by Michelle O’Neill for the victims of the Manchester bomb needs to be heard and understood.

Those who attempt to score cheap political and publicity points in Ireland on the back of the Manchester atrocity disgrace and diminish themselves.

Regrettably, there are those in both the British and Irish governments and state agencies, political parties, combatant groups, media, churches (and some who have occupied several of these roles) that promote a single narrative based upon duplicity. They have their share of uncomfortable conversations to reflect upon.

The war in Ireland is over, even though its legacy casts a long shadow.

But the absence of war is not enough.

Unless we make reconciliation, healing and forgiveness our future, then society and politics in Ireland will remain trapped in the pain and resentment of the past.

Some within political unionism and the British state have deliberately sought to weaponise the past and to turn it into a new battlefield.

It is ironic that members of the British royal family seem to embrace a more advanced view about the direction of our peace process than elements of the British state and some unionist leaders.

Reconciliation in Ireland or anywhere else in the globe will not be built upon resentment, recrimination, or cynical opportunism.

The current political crisis within our peace process demonstrates the urgent need to move it towards a new phase based upon reconciliation and healing.

Sinn Féin is absolutely committed to bringing that about and creating a new context within which we can develop new human and political relationships in the North, throughout Ireland, and between Ireland and Britain.

In spite of the naysayers and rejectionists the Irish Peace Process is the most important political project in Ireland.

It personifies hope in the face of adversity and is a conflict resolution model which many caught in seemingly intractable conflict across the globe look towards for inspiration.

Our peace process is proof that another world is possible.

The Manchester bombing is a brutal reminder that a better, safer, world of solidarity must not only be an aspiration but also a concrete political and social objective. 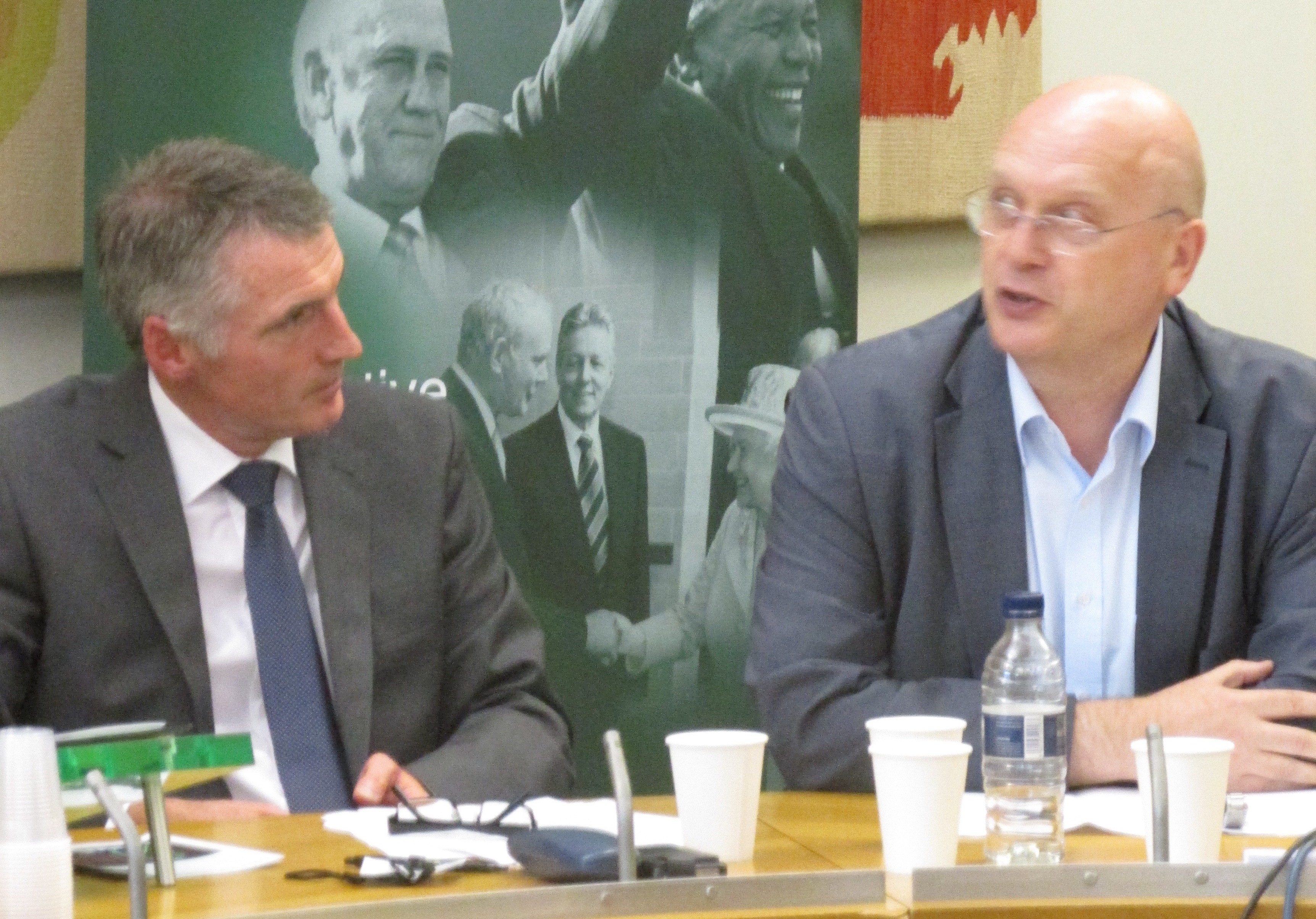