Tamils in Derry mark anniversary of Sri Lanka’s massacre of up to 70,000 people

A DELEGATION of Tamils has visited Derry to mark the anniversary of the massacre of up to 70,000 Tamils by Sri Lankan forces in 2009 – ‘Mullivaikkal Remembrance Day’.

Tamils in their homeland were allowed to commemorate the massacre this year only under severe restrictions. 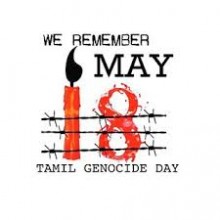 Members of the group shared their experiences of the massacre and time spent in Sri Lankan military concentration camps.

“The Tamil people have suffered so much and continue to struggle against oppression with dignity and courage.

“We share their determination to seek justice for the enormous hurt they experienced during the conflict, when tens of thousands of people were murdered by the Sri Lankan military.

“It is important that we hear of the experience of the Tamil people and highlight the injustice they suffered and continue to suffer to the international community.

“The international community have forgotten the Tamil people and it is vital that we bring their story to a wider audience.

“I and the Sinn Féin MEPs in the European Parliament will continue to support the Tamil people in Europe.”

The group also visited the Republican Plot in the City Cemetery and the graves of republicans and IRA Volunteers.