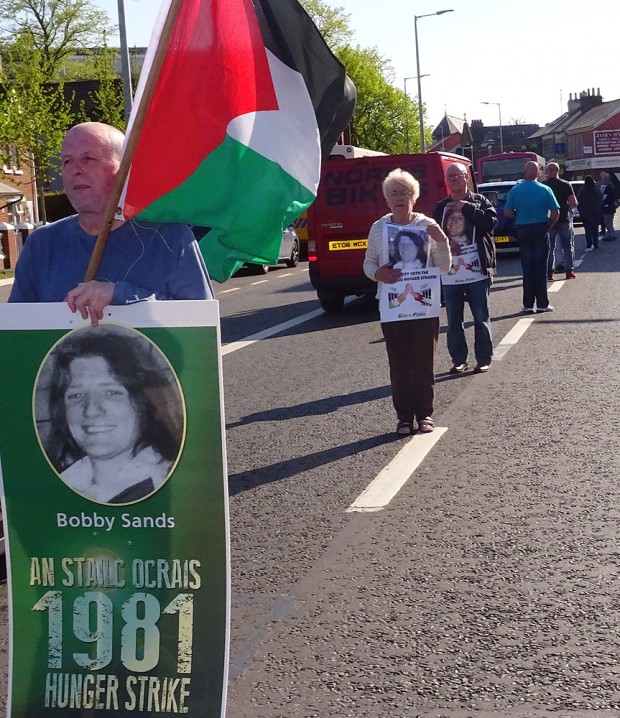 REPUBLICANS across the country – from Derry to Cork, Belfast to Kerry and Dublin to Galway – came onto the streets on Friday 5 May to mark the 36th anniversary of the death of IRA and H-Block martyr Bobby Sands MP on hunger strike in Long Kesh.

In a show of solidarity with the 1,600 Palestinian prisoners on hunger strike in Israeli prisons, they carried the Palestine national flag.

Speaking at a white-line picket on the Falls Road in Belfast, in the shadow of the world-famous Bobby Sands mural, former hunger striker Pat Sheehan was joined by a number of H-Blocks ‘Blanketmen’ and Sinn Féin Councillor Mary McConville, who took part in the protest in Armagh Women’s Prison:

“We are standing here highlighting a hunger strike by 1,600 Palestinian prisoners against the horrendous conditions they face in Israeli jails. Many are imprisoned under ‘Administarive Detention’, which is internment. They are denied visits from their families and can’t even see their children.”

Pat Sheehan highlighted the case of Marwan Barghouti, who is leading the hunger strike, saying:

“The Israelis are holding him, refusing to release him, because they fear him as he is seen as a unifying force who could bring the different Palestinian organisations together, something the Israelis don’t want.”

Also speaking at the protest, Sinn Féin’s Westminster candidate for West Belfast, Paul Maskey, said there is an affinity between the people of Ireland and the people of Palestine and added:

“We will always support the demands for freedom from occupation made by the Palestinian people.”