Hopes for peace in the Basque Country, writes Gerry Adams 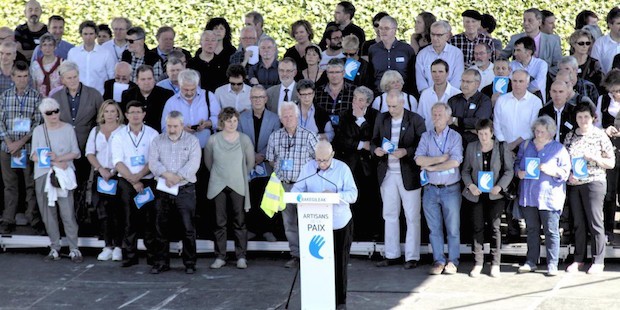 IN THE MIDST of the ceremonies last week to complete the process of putting the weapons and explosives of ETA beyond use, the figure of former Methodist Minister Harold Good was centre stage.

In 2005, along with my very good friend the late Fr Alec Reid, the two men played a key role as independent witnesses in the process by which the IRA put its weapons beyond use.

Last weekend, Reverend Harold Good was in Bayonne, a city in south-west France. It is part of the extended Basque Country. He was there to take part in the final act by ETA of putting its weapons beyond use.

It was a simple ceremony held in the City Hall. It involved a list of arms dumps being handed over to the international witnesses providing the location of these dumps. The French police then took possession of them.

Outside, tens of thousands of Basques celebrated this momentous decision and held aloft white cards containing the symbol of a dove of peace. 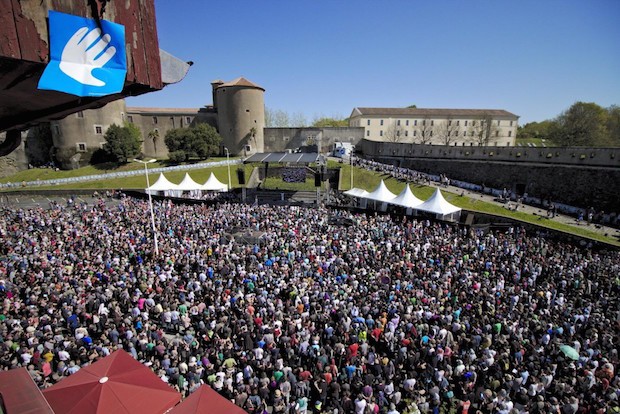 The decision by ETA to take this historic step has the potential to transform the relationships between the Basque Country and the Spanish and French states.

I want to commend the leadership of ETA on this momentous initiative. I also want to commend Basque civic society, the International Verification Commission, and EH Bildu for their courageous efforts over many difficult years to build the peace process.

This is a truly defining moment, a milestone, in the efforts to build a lasting peace in that region and to achieve a political settlement that respects Basque self-determination.

There is an enormous responsibility now on the Spanish and French governments, and all of the political parties, to grasp the opportunity provided by this extraordinary development.

The people of the Basque Country, represented by a range of political parties and civic organisations, have been involved in recent years in a substantial dialogue around building a peace process. Their objective has been to bring an end to violence while creating the conditions for democratic and peaceful political change, including independence.

They took as their model the Irish Peace Process. Consequently, myself and other Sinn Féin leaders have travelled regularly to the Basque Country to participate in this debate and to encourage its development. Sometimes the discussions were held in the Basque Country, sometimes in Belfast, and on a number of occasions senior Sinn Féin representatives travelled to Geneva for meetings with Basque representatives and other international players.

The strategy that emerged, based largely on language and principles agreed in the Irish Peace Process, commits Basque activists to using “exclusively political and democratic means” to advance their political objectives.

It seeks to advance political change “in a complete absence of violence and without interference” and “conducted in accordance with the Mitchell Principles”. And its political goal is to achieve a “stable and lasting peace in the Basque Country”.

There is a long affinity between Irish people and the people of France and Spain and the Basque Country. Sinn Féin’s efforts to assist in building a peace process there go back to the Good Friday Agreement. In that time there have been moments of great hope but also of despair as the opportunity for peace suffered setbacks.

The Irish Peace Process, despite its imperfections, has demonstrated that, with imagination and dialogue and a commitment to achieve peace, it is possible to make progress. 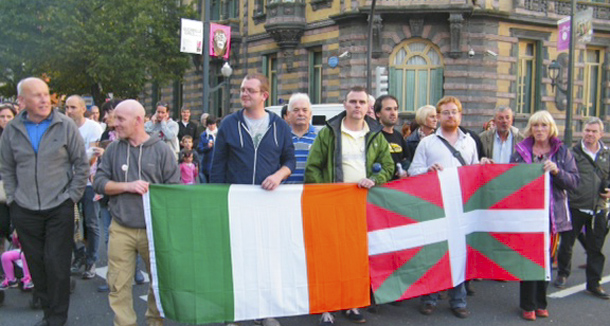 “Violence usually occurs when people believe that there is no alternative. Transforming a situation from conflict to peace requires therefore that an alternative is created.”

Making peace is hugely challenging and enormously difficult. It demands that we seek to understand what motivates, what inspires, what drives our opponent.

Ultimately, as Madiba – Nelson Mandela – said, we have to make friends with our enemy.

Each conflict is different but it is possible to discern broad guidelines or principles that can contribute to a peace process. These include:-

In Ireland this meant, for example, improving conditions for prisoners, including moving those who were in England closer to their homes in Ireland. It meant demilitarising the environment and ending the use of emergency laws and repression, a new beginning to policing, and the release of political prisoners.

In this context I would appeal the Spanish and French governments to respond positively to this very important development with generosity and imagination.

As a first step, both should engage in dialogue with the representatives of all of the Basque people.

Addressing the treatment of Basque political prisoners – including ending the policy of dispersal of Basque prisoners and moving those who are a significant distance from their families closer to their homes previous to an early-release process – would also be an important confidence-building measure. 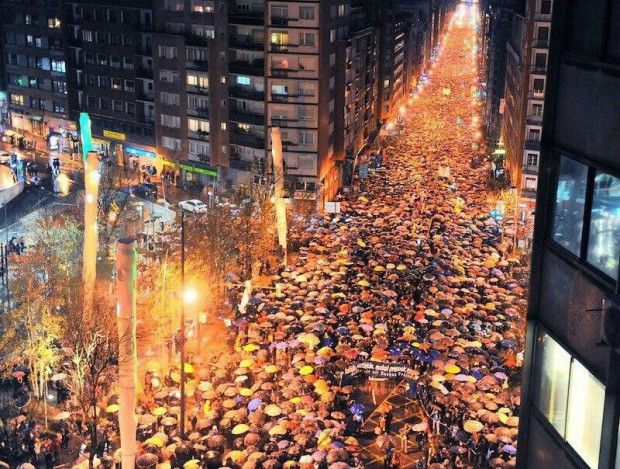 ● Rally in support of Basque political prisoners in 2013

The Basque people have repeatedly demonstrated in elections and on the streets their support for a peaceful resolution of the conflict in that region. The initiative by ETA is an opportunity that must not be squandered.

The Spanish and French governments have a key role to play now in promoting a process of dialogue that can advance the goal of a just and lasting peace in the Basque Country and of bringing to a permanent end one of the last European conflicts.

This article is reproduced from Gerry Adams’s blog, Léargas