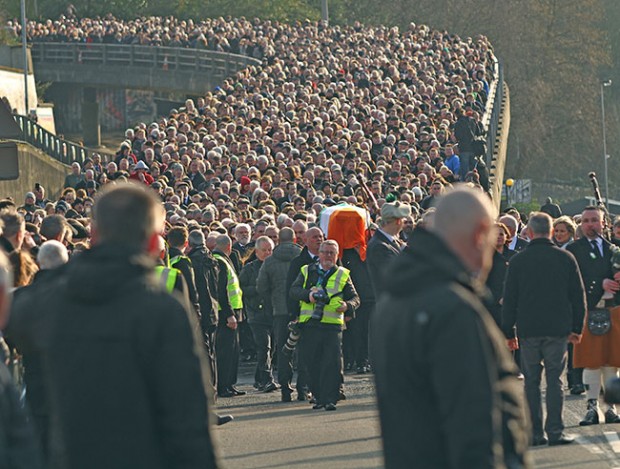 • The start of the huge funeral cortege

His Sinn Féin Ard Fheis speeches in the years surrounding the Good Friday Agreement were always calming. He spoke from and to the base of our movement. He was listened to because he was always at the front line. He was the beating heart of Irish republicanism.

IT IS HARD to put into words the deep sense of loss that Irish republicans are feeling.

The untimely passing of Martin McGuinness has left a hole in our political world.

Martin was not just a colleague. He was at the very centre of our political gravity. With his calm determination he inspired, encouraged and led in equal measure.

My first real encounter with Martin was on a trip to Westminster with Gerry Adams in 1997. The two newly-elected MPs were travelling deep into enemy territory.

I was a fly on the wall for An Phoblacht as they sought to rebuild a peace process faltering on the rocks of unionist intransigence and British indifference.

As a wide-eyed young activist I caught an up-close glimpse of these two towering figures of Irish politics at a crucial moment in our country’s history.

They had a relationship that was unique, borne of long periods of time working together during the dark days of conflict.

When talking together between meetings, their conversations were thoughtful, exploring every option, asking others for opinions – even those of us with little knowledge or experience of the huge matters at stake in the day’s engagements.

Gerry’s great gift of strategic foresight was bolstered by Martin’s gut instinct, his intuitive sense of where we as a political movement were at and where we could go.

Both men were determined to take risks to advance our struggle for a united, just and peaceful Ireland.

The challenge was always in finding the balance between the level of risk and the rate of return – and to do this in a way that brought all of us with them while earning the respect of opponents on both sides of the Irish Sea.

I have no doubt that in those years of high-stakes risk taking, things would have been much more difficult without Martin.

His Sinn Féin Ard Fheis speeches in the years surrounding the Good Friday Agreement were always calming. He spoke from and to the base of our movement. He was listened to because he was always at the front line. He was the beating heart of Irish republicanism.

Contrary to the narrative of some, there was only ever one Martin McGuinness. Throughout his life he displayed the same bravery, determination and commitment no matter the circumstances. 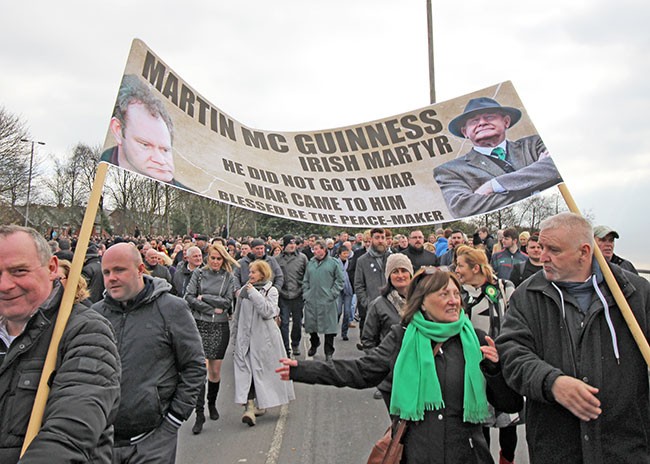 • Not just a funeral but a celebration of Martin's life

Indeed, that strength and continuity of character played no small part in changing those circumstances from days of loss and pain to days of hope and possibility.

When his neighbours marched peacefully for civil rights, he marched with them. When his friends were beaten and shot off those same streets, he stood up to defend them. When war arrived uninvited to his doorstep, he did not flinch. But when risks were required to bring peace and reconciliation, he was not found wanting.

As Minister for Education he challenged inequality. As deputy First Minister he fostered reconciliation.

The breath and warmth of the tributes paid to Martin and his family are testament to the strength and depth of his character.

They are, whether people know it or not, a testament to everything that is noble in our political tradition.

The republican commitment to equality demands that we strive to understand others, especially those who do not share our worldview. There is a compassion embedded in the republican principle of solidarity, a generosity that flows from our embrace of liberty and freedom.

Martin didn’t just understand these things. He practised them every single day. He never wavered in his commitment to realise a united, just and peaceful Ireland yet always demonstrated an ability to engage, listen and seek agreement for the greater good.

There will be many tributes paid to Martin in the coming days from people who knew him far longer and much better than I did.

But having been witness to his selfless pursuit of the Republic during my 20 years in Sinn Féin, I can say only this – if at the end of my political life I achieve a tiny fraction of what Martin has achieved it will have been a life well lived.

Martin, we miss you deeply. Your absence will never be filled but your life will continue to inspire our generation of republicans to realise the goals that you fought so hard to achieve.