Final journey in the town he loved so well 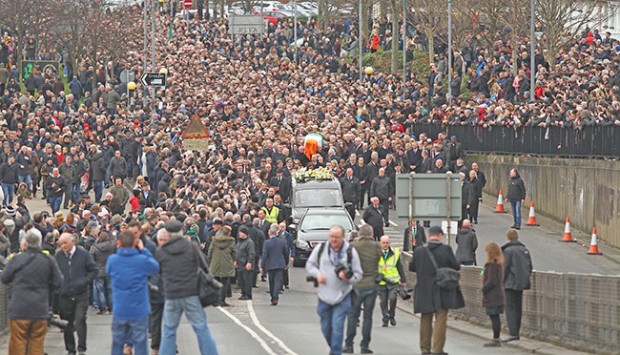 TENS OF THOUSANDS of people thronged the streets of Derry for the final journey of Martin McGuinness in one of the largest funerals ever seen in the city.

The huge sense of grief at the death of Martin McGuinness was palpable in the city in the days leading up to his funeral as huge crowds of people gathered at the wake house from morning to night to pay their respects to the family of the iconic republican leader.

On the eve of his funeral, people of all political backgrounds and none queued for up to two hours to pay their final respects to Martin McGuinness.

On Thursday morning, crowds began to gather early in the morning as buses carrying republicans from all across Ireland ferried mourners to Derry. People lined the streets for the journey leading from Martin McGuinness’s home, through the Bogside to the church.

As Martin’s remains were brought from his home, it was met by Sinn Féin MEP Martina Anderson and leading republican Martin Lynch, Chair of Sinn Féin’s Cúige Uladh, who placed the National Flag on the coffin.

Internationally-renowned singer Frances Black (also an Independent senator in the Oireachtas) then sang Raglan Road, one of Martin’s favourite songs, written by Patrick Kavanagh, a poet close to his heart, while Matt Molloy of The Chieftains and The Bothy Band fame played.

The cortege then started its journey to the church, with the coffin being carried by the McGuinness family. 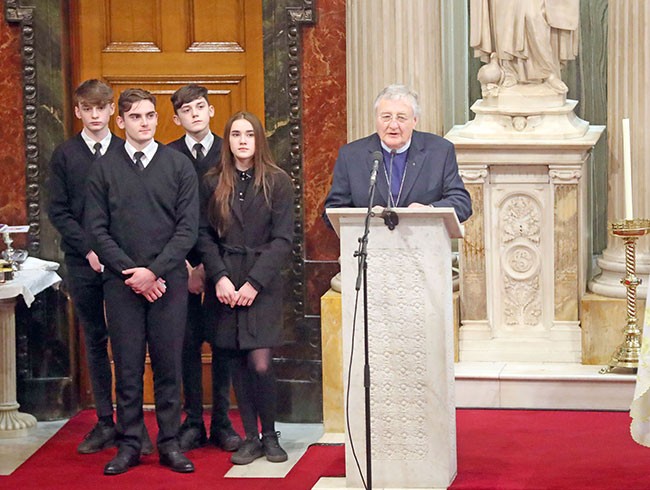 The huge crowds along the route erupted in spontaneous applause as the funeral cortege passed as the people of Derry paid their own tribute.

The cortege grew as it passed the iconic Free Derry Corner where, as a teenager, Martin McGuinness joined so many others to repel the Stormont sectarian state’s stormtroopers in the Royal Ulster Constabulary from the area in what became known as “The Battle of the Bogside”.

As the funeral procession made its way up the motorway flyover towards the church, the scene of so many confrontations at republican funerals in the city during the 1980s, the applause from the large crowds continued.

Mourners from across Ireland joined international guests and dignitaries for the funeral in St Columba’s Church, Long Tower.

Among the high-profile guests who travelled to Derry for the funeral were President of Ireland Michael D Higgins, former United States President Bill Clinton, former President of Ireland Mary McAleese, Taoiseach Enda Kenny, British Government Secretary of State James Brokenshire, and representatives from the Basque, Palestinian Cuban, Catalan struggles, including the Ambassadors from Cuba and Palestine.

The leaders of the North’s main political parties, including DUP leader Arlene Foster and former party leader Peter Robinson, also attended the funeral Mass and were given a warm welcome by mourners, including a special acknowledgment of thanks by the Sinn Féin leader in the North, Michelle O’Neill.

Those who could not get into the church gathered at Free Derry Corner in Martin McGuinness’s native Bogside to watch a live streaming of the funeral on a large screen while millions more watched as the service was broadcast on numerous news networks and online to a global audience. 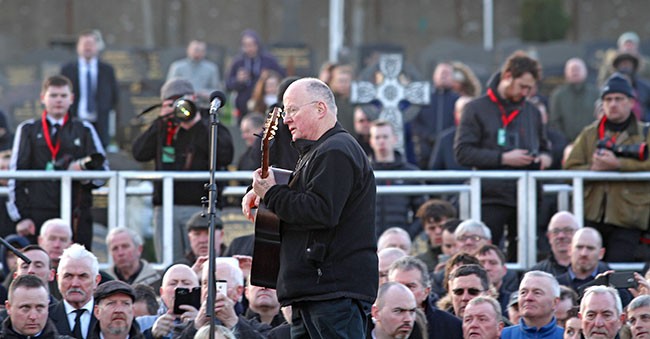 During the Mass, local Presbyterian minister and close friend of Martin McGuinness, Dr David Latimer, was among the speakers who paid emotional tributes to the republican leader.

President Bill Clinton spoke during the service. He praised Martin’s work as a peacemaker and urged everyone to build on his legacy in the times ahead.

After the Mass, the cortege made its way to the City Cemetery, through the republican heartlands of the Bogside and Creggan on Martin’s final journey.

The cortege was flanked for part of the way by a guard of honour of Sinn Féin elected representatives, members of the party’s Ard Chomhairle and National Officer Board, and other senior republican leaders.

At the Republican Plot in the City Cemetery, close to the Cúchuilín statue which Martin and other Derry republicans helped to erect in 1975 to remember all of those who gave their lives for Irish freedom, crowds gathered at the graveside.

The graveside oration was given by Gerry Adams who said Martin was a freedom fighter who had a passion for justice and freedom, remarks which were greeted by loud applause and cheering from the large crowd (see our Special Supplement for the speech).

The sun shone at the graveside on what was one of the darkest days for Derry republicans but Gerry Adams’s stirring oration and the appearance of folk legend Christy Moore lifted the spirits of the grieving yet proud masses as they left the cemetery determined to build on the legacy left by their hero and continue his work to deliver a Republic for all.