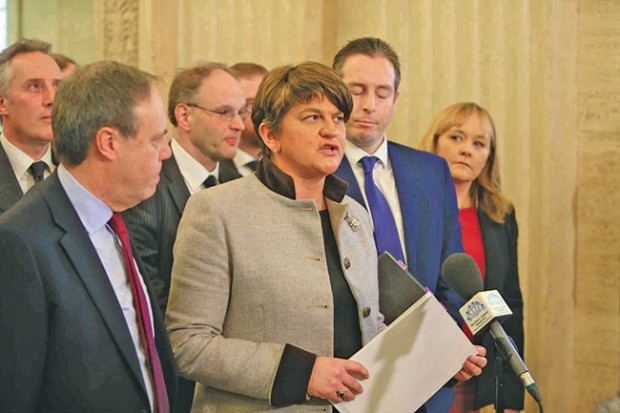 24 HOURS before the deadline was to expire in all-party talks to re-establish the Stormont Executive and the institutions, Sinn Féin leader Gerry Adams made it crystal clear who was up for achieving a resolution and who was not.

“The Sinn Féin negotiating team and Michelle O’Neill are here in Stormont Castle,” Gerry Adams said. “The Irish and British governments are here also. The DUP is not.”

Gerry Adams said it was a matter of regret that there had been “no substantive progress across all of the key issues that are at the core of the current impasse”.

He said that the recently-deceased Martin McGuinness (who had been laid to rest just 72 hours earlier) had set the tone for the current phase of negotiations when he said that there can be no return to the status quo.

“The DUP’s approach thus far has been to engage in a minimalist way on all of the key issues, including legacy issues, an Irish Language Act, a Bill of Rights, and marriage equality,” Gerry Adams said.

“They have been reinforced in this by the British Government’s stance. This is unacceptable and a matter of grave concern.

“I am sure this concern is shared by the Irish Government. The Taoiseach knows that he is the co-equal guarantor, with the British Prime Minister, of the Good Friday and other agreements. People across this island need to see the Taoiseach standing up for these agreements.

“For our part, Sinn Féin wants to see the institutions up and working for everyone. We are not looking special favours or privileges for anyone. The terms for the re-establishment of the institutions are clear. They threaten no one.

“Sinn Féin is up for building a pluralist rights based society as set out in numerous agreements. Is the DUP?”

The Sinn Féin leader said that he believes:

“Unionism is at a crossroads.

“The DUP needs to decide whether and when it will rise to the challenges of this time and work in genuine partnership with nationalists and republicans, and all sections of our society, on the basis of equality and respect – for everyone.” 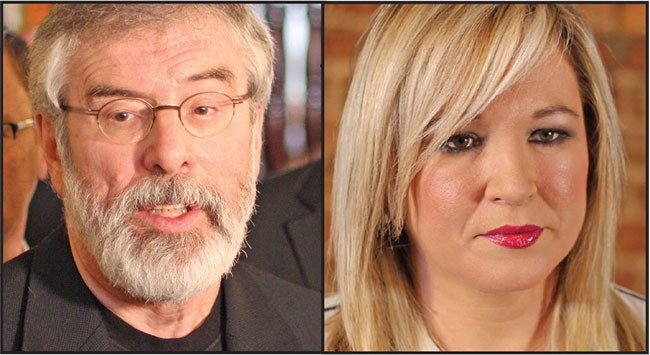 Earlier that week, on the eve of the funeral of Martin McGuinness, Gerry Adams was in Newry at one of a series of “town hall” meetings being held by the party across the island.

He emphasised the Sinn Féin view that the talks were about an implementation process, not a negotiation process.

“There cannot be continuous negotiation and renegotiation of agreements already made,” he said, explaining why Sinn Féin was opposed to any extension of the deadline of 4pm Monday 27 March or a return to direct rule from Westminster.

“As Martin McGuinness said in his letter of resignation: ‘Successive British governments have undermined the process of change by refusing to honour agreements and refusing to resolve the issues of the past while imposing austerity and Brexit against the wishes and best interests of people here.’

“The Irish Government is the co-equal guarantor of the Good Friday and subsequent Agreements. The Taoiseach needs to make it clear by deed as well as word that the Government will implement in full its obligations and hold the British Government to account for its obligations, internationally if need be.”

“So, we will bury our friend Martin McGuinness tomorrow and move directly from his graveside to urgently do our utmost to get the Executive and the Assembly restored and working.

As the deadline passed on 27 March, Sinn Féin MLA Michelle O’Neill insisted that the implementation of previous agreements remains key to making progress at Stormont.

“The British Government is not some sort of independent broker in this process. The British government is a player and part of the problem. Their approach in the talks meant that no agreement was possible.”

She said that British Secretary of State James Brokenshire “cannot wash his hands” of his government’s responsibilities and obligations to implement the commitments made in previous agreements, spelling out for him and Prime Minister Theresa May:

“The key to making progress is for the British Government to take some responsibility and honour its commitments.”