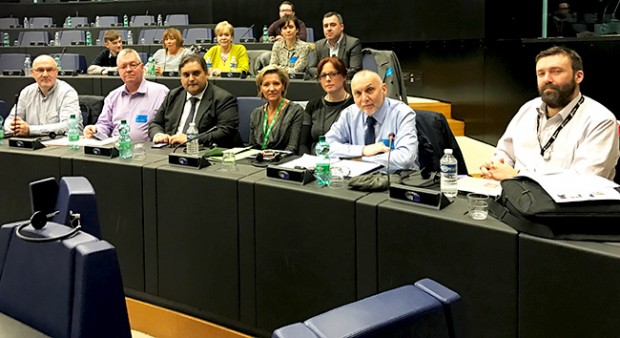 • The delegation from Ireland with (front row, third from left) Claude Moraes, Chair of the European Parliament Committee on Civil Liberties, Justice and Home Affairs

Human Rights Commissioner said the British Government was breaching the European Convention of Human Rights by not conducting effective, independent and reasonably prompt investigations into killings by state forces

THE Council of Europe’s Commissioner for Human Rights, Nils Muižnieks, has said he is seriously considering a personal request by relatives of victims of British state forces to make a return visit to Belfast in the coming weeks to see how the British Government has failed to meet its legacy commitments under the Stormont House Agreement and international human rights legislation.

The Human Rights Commissioner travelled to Belfast in 2014, when he said that the British Government was breaching the European Convention of Human Rights by not conducting effective, independent and reasonably prompt investigations into killings by state forces.

“Article Two, the right to life, is one of the core rights,” he told the BBC.

On Monday 13 February, the delegation flew from Belfast to Strasbourg for a series of meetings with senior EU and European human rights officials to present evidence on Westminster's backsliding on commitments.

The schedule was organised and co-ordinated by Martina Anderson MEP.

On arrival in Strasbourg, the delegation went straight into two key meetings, the first with the Office of the Execution of Judgments, which supervises the measures taken by member states to give effect to the judgments of the European Court of Human Rights.

Seán Murray explained that the British Government is to bring forward yet another “implementation plan” for this June on outstanding legacy issues.

“As a member of Sinn Féin’s negotiating team, I outlined our attempts over the past year – involving 16 meetings with officials – to engage the British Government in a serious negotiation on key outstanding issues around onward disclosure, legal representation in ‘closed courts’, legal aid for families and the adequate resourcing of legacy investigations and inquests.

“Despite our best efforts, no meaningful response from the British Government was forthcoming, especially around the key issue of disclosure of information to families.

“While we outlined a number of key underpinning principles to effectively deal with any alleged British Government concerns in our options papers tabled at the Fresh Start talks, to date we have still not received any response from the British Government on this issue.” 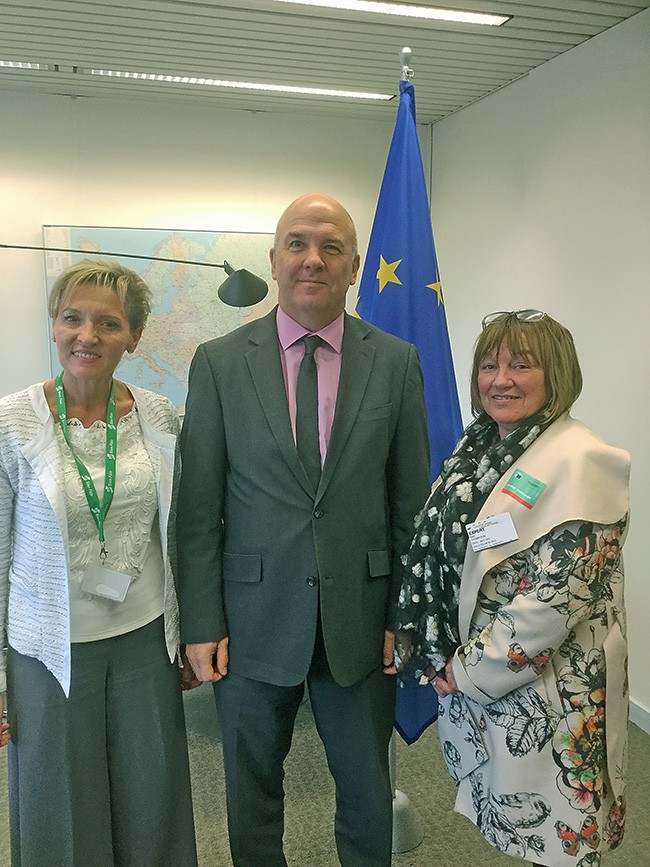 • Martina Anderson MEP with Nils Nils Muižnieks, Council of Europe Commissioner for Human Rights, and Marie Louise 'Minty' Thompson, whose mother Kathleen was shot dead by the British Army in 1972

The importance of timely and comprehensive submissions to outside bodies by key NGOs was highlighted by Genevieve Mayer, Head of Office of the Execution of Judgments. They could outline the key areas that the British Government had failed to deliver on and this would assist their office in testing the veracity of any ‘implementation plan’, she said.

She also outlined Article 14 for the delegation with its provision for taking infringement procedures against any state refusing to implement key measures.

“We intend to fully explore the potential for this option with our legal team and the key campaign groups,” Seán Murray said later.

Next was a meeting with Commissioner for Human Rights Nils Muižnieks where he gave a positive hearing to their request for a return to the North of Ireland after relatives and campaign groups spoke of the impact of his previous visit and subsequent comments.

They requested a return visit to assess the lack of progress on the implementation of the Stormont House Agreement mechanisms in a human rights compliant manner.

Other issues highlighted included the lack of adequate funding for inquests, the Police Ombudsman’s legacy investigations and the use of torture by state forces during the conflict.

The delegation attended a meeting of the European United Left/Nordic Green Left group (GUE/NGL) European Parliament Group, the group that Sinn Féin is a member of.

Seamus Finucane and Marie Louise Thompson were invited to address around 150 MEPs on legacy issues. Afterwards, a number of MEPs outlined the requirement for a wider platform for the presentation on the legacy issue attended by a larger delegation from Ireland.

Before their departure the following day, the delegation held a meeting with Claude Moraes, a British Labour Party MEP who chairs the European Parliament’s Committee on Civil Liberties, Justice and Home Affairs (LIBE).

The visit emphasised the value of having a Sinn Féin voice in the European Parliament to speak up for people’s rights in Ireland and to combat the propaganda of the powerful British political interests operating in mainland Europe. There are fears about how Brexit might affect this in the future.