‘This is not Groundhog Day’

‘There has been a shift in the political landscape. There has to be real change’ – Michelle O’Neill

THE RETURN to Stormont by newly-elected MLAs on Monday 6 March showed Sinn Féin getting straight back down to negotiations with the other political parties and the British and Irish governments, determined to get effective and accountable institutions up and running.

“This is not Groundhog Day,” declared Sinn Féin’s Michelle O’Neill from the outset.

“There has been a shift in the political landscape,” she said, referring to the fact that the unionist majority is gone, down to a combined total of 40 seats in the new 90-seat Assembly as against 39 held by Sinn Féin and the SDLP.

This electoral shockwave has ended almost a century of near-unchallenged unionist dominance at Stormont.

“There has to be real change.”

Michelle highlighted the gains made by Sinn Féin after the party called for the fresh election when DUP leader and First Minister Arlene Foster rejected attempts to clear a path for a transparent investigation of the Renewable Heat Incentive financial scandal, one that has tainted her and DUP colleagues.

The Sinn Féin leader in the North said:

“We have been given a very strong mandate to enter negotiations and we must now make a difference.

“The people have had their say and the message is very clear. They don’t want minorities or majorities – they want equality. They want agreements implemented. They want progressive change.

“Political unionism must now live up to its responsibility to share power on the basis of equality, to demonstrate respect and to act with integrity in government.

“From today we will start meeting with the other parties and the two governments and tell how we see it and what it'll take to fix it.

“We will confront the two governments who have shamefully undermined and failed in their duty to protect, nurture and develop the Good Friday Agreement.

“What is required is genuine power-sharing and partnership with republicans, based on equality and respect and mutual respect for our Irish national identity.” 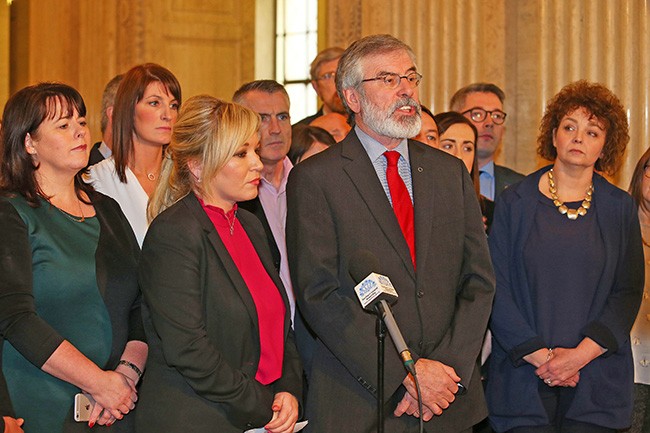 • 'Without a fundamental change in the approach of the British Government, there can be no progress’ – Gerry Adams

Sinn Féin’s 28 new MLAs were joined on the first day back at Stormont by Sinn Féin TDs and senators from the Oireachtas in Dublin, reflecting the all-Ireland growth of republicanism.

“The unionist majority in the Assembly has been ended,” said Sinn Féin President Gerry Adams TD.

He also said that if recent statements by British Secretary of State James Brokenshire and Prime Minister Theresa May are to be taken at face value “it would seem that the British Government is determined to repeat the mistakes of the past”.

“The British Government has consistently refused to implement the agreements, sought to impose Brexit against the will of the people and the best interests of the economy, and sought a special deal to ensure that no British soldier or their agents can be held to account for their actions during the conflict.”

He reminded the Conservative Party premier and her appointee, James Brokenshire:

“Remember, the British Conservatives got only 2,379 votes in last week’s election.”

Gerry Adams insisted that the approach of James Brokenshire and his  British Government at Westminster is part of the problem.

“Without a fundamental change in the approach of the British Government, there can be no progress,” he said.

“I am concerned that the Irish Government is turning a blind eye to the belligerent approach of the British Government.

“This is totally unacceptable.

“The Irish Government is a co-equal guarantor of the Good Friday and other agreements.

“The Taoiseach needs to fulfill this duty.

“Sinn Féin has demonstrated our patience and generosity.

“We want the institutions up and running on the basis of equality and respect, and for the outstanding agreements to be implemented in full.

“This is not the sole responsibility of Sinn Féin or the parties in the Assembly.

“There is a responsibility on the two governments to come to the table with a plan to honour all agreements.

“If progress is to be made we need to hear from the governments that they will oversee the full implementation all agreements.

“To date, they have failed to do this.”

As Sinn Féin conducted its round of meetings, Gerry Adams told RTÉ during an interview ahead of meeting British Secretary of State James Brokenshire:

“Today is about meeting as many parties and people who want to meet with us.”

“Myself and Michelle O'Neill are going to meet the British Secretary of State now.

“We are actually keeping him waiting. But that’s no harm given how long the British have kept us waiting.”