A Tale of Two Elections 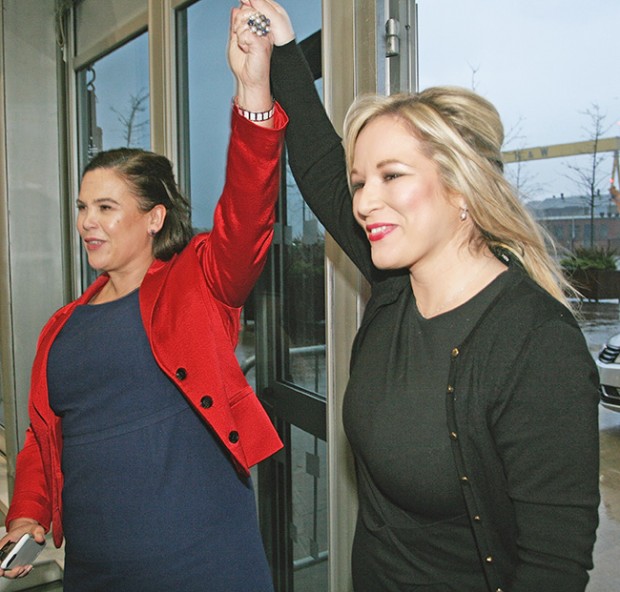 WITH the political ground still reverberating with shockwaves and tremors as more and more debris from the once monolithic unionist citadel tumbles to earth in the aftermath of the North’s Assembly elections on 2 March, PEADAR WHELAN looks back on a year that has seen the electoral tide turn on the DUP and left nationalism in its strongest position ever in the gerrymandered Northern state.

LAST MAY, I stood in the Titanic Exhibition Centre on the sprawling industrial estate that encompasses the former Harland & Wolff shipyard site. It’s now home to the Titanic Visitor Centre and much else that represents the change from the old Belfast to a new Belfast of tourists and modern hi-tech digital industries.

As with any election count I have attended and reported on for An Phoblacht down the decades, all the party leaders turn up at some point.

The North Belfast election results are seen as a barometer of the public mood and all the major media outlets have makeshift studious at the Belfast count centre. From a publicity point of view, it’s the place to be.

The SDLP’s John Hume in previous years and that party’s subsequent leaders would swan in on a slipstream of benevolence.

David Trimble and his predecessors in the Ulster Unionist Party would busy in and try to put a brave face on one more shipwreck of a campaign, never seeming to get it that the unionist electorate had decided that ‘Big House unionism’ was a thing of the past.

UUP leaders Reg Empey, Tom Elliott and Mike Nesbitt all represented a threat that never really amounted to more than a paper tiger challenge to the DUP, whether under Ian Paisley, Peter Robinson or Arlene Foster.

With his hasty resignation on election night before the full count was even near its end, it is clear that Nesbitt didn’t, in the long run, have the stomach for the fight. 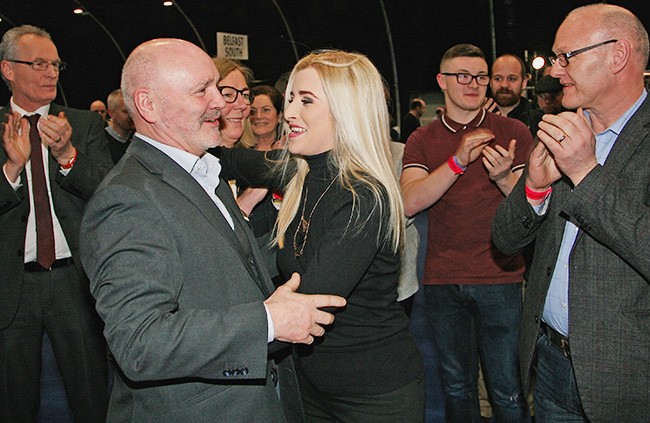 Back in the old days, the shift in unionist voting patterns favoured Ian Paisley’s DUP and ‘The Big Man’ lumbered into the count centre, bruising for a fight with anybody he could bully.

His more stylish lieutenants, Peter Robinson with Iris at his shoulder alongside Nigel and Diane Dodds (with the more earthy Sammy Wilson), glowered from under the cloak of invincibility that Paisley gave them.

The media was intimidated, as were the DUP’s unionist rivals.

Ten months ago, the new leader of the Democratic Unionist Party, Arlene Foster, had the world at her feet.

She presented herself as the ‘Prime Minister of Northern Ireland’ rather than First Minister in a joint office shared with Martin McGuinness. As the results came in then, one after the other, it was clear the DUP and Foster were going to be top dogs by a long shot.

Arlene took the DUP gains as her personal triumph. As she strode around the count centre, her entourage in tow, it was in the manner of a conquering empress – all that was missing was the laurel-leaf crowns.

The Dodds family, Nelson McCausland, William Humphrey, Emma Little-Pengelly, Paula Bradley and Joanne Bunting, all with grins as wide as Royal Avenue, padded along behind.

The only discordant note for the DUP in Belfast was the failure of ex-UDA man Frank McCoubrey to capture the last seat in West Belfast. He was edged out by the SDLP’s Alex Attwood but Arlene had time to pat him on the back and wish him luck for the next time.

In her arrogance in the days after her party’s 38-seat tally she began wearing a jewel-studded crown on her lapel, clearly implying that she was now ‘Queen of Northern Ireland’, not just holding the title of First Minister. 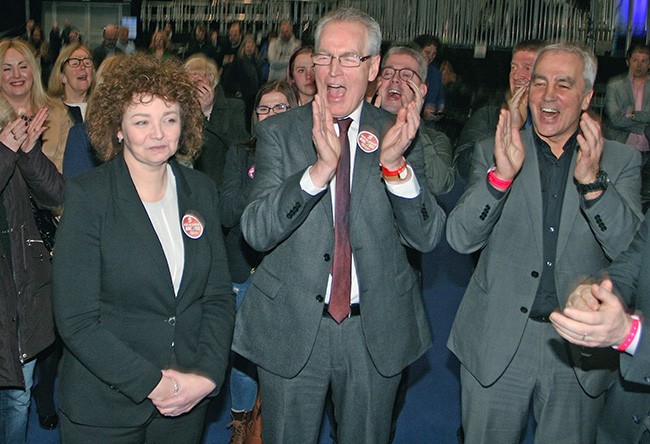 Her crown came to represent the arrogance of Foster as a unionist leader who would brook no nonsense, particularly from Sinn Féin.

When the Executive was set up it was clear from the unrestrained actions and comments of her ministers that gains made by Sinn Féin for nationalists around issues such as the Irish language would be rolled back.

Her attitude, and that of her Communities Minister Paul Givan, who cut funding from the Irish-language Líofa programme (although he was subsequently forced by pressure to restore the £50,000 fund), came to represent one of the most important themes of an election in the past few weeks that has wrecked her political career.

The debacle over the Renewable Heat Incentive (RHI) scheme was the straw that broke the camel’s back. It led to Martin McGuinness resigning as deputy First Minister. Foster was defiant. Intransigent. And insulting.

The DUP leader and First Minister airily waved aside Sinn Féin calls for equality and respect as well as integrity in government.

“If you feed a crocodile it will keep coming back for more,” she said.

It was a jibe that would come back to bite her.

The crocodile became a motif of the election as young republicans donned crocodile costumes and appeared at rallies and DUP offices, capturing the mood amongst nationalists whose patience had long been wearing thin at repeated DUP slights and habitual arrogance. 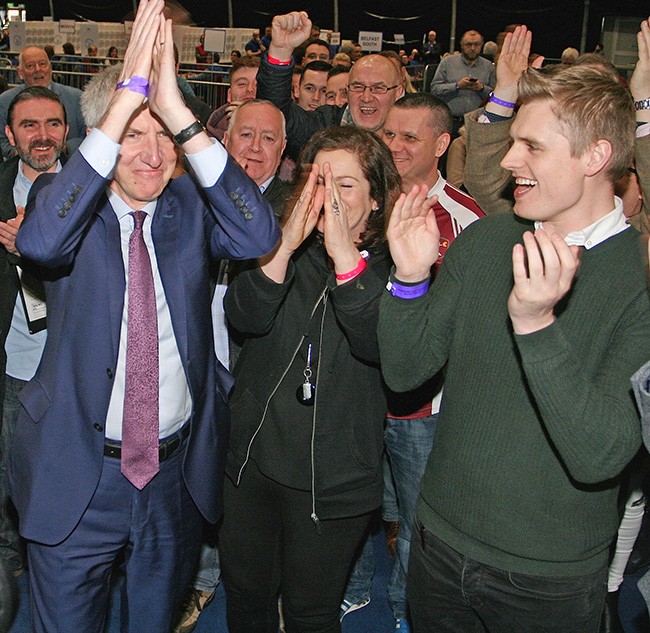 At the Sinn Féin election launch, Michelle O’Neill diplomatically refused to rise to the taunts of the DUP and she told reporters she was “not interested in the negativity”. Sinn Féin leader Gerry Adams, however, couldn’t resist mischievously quipping to the media as the platform party left the stage: “See you later, alligator.” There was huge laughter all round.

At the election count, from early on Friday morning 3 March, with the boxes opened and the first tallies being taken, it was already shaping up to be a bad day for the DUP and a good one for Sinn Féin.

The barometer for this writer was DUP diehard Nelson McCausland.

Early signs indicated that his North Belfast seat was under threat and his eyes flashed neon signs of anger and despair but most of all dejection and rejection.

What was worse for him was that photographers there knew the DUP bruiser was on the ropes so they tried to capture his moment of misery on camera. No matter where he turned to avoid the clickers, he turned into one more. In the end, when his result was confirmed, he stormed out of the centre, refusing to stay for the official announcement and make his valedictory speech.

As the dust from the collapse of Nelson’s column settled, we discovered that nationalists had taken three seats in North Belfast to the unionists’ two. One more bastion of unionist dominance had been breached.

SDLP stalwart Alex Attwood was another to lose his seat,in West Belfast.

Sinn Féin returning four out of four candidates for the five seats in the constituency leaves SDLP representation at just two Belfast City councillors. The writing is clearly on the wall.

Worryingly for the SDLP and leader Colum Eastwood, Sinn Féin outpolled the party in its strongholds of Foyle and South Down.

Over in Omagh Leisure Centre, where the count for her Fermanagh & South Tyrone constituency was taking place, there was an imperious silence from Arlene Foster. 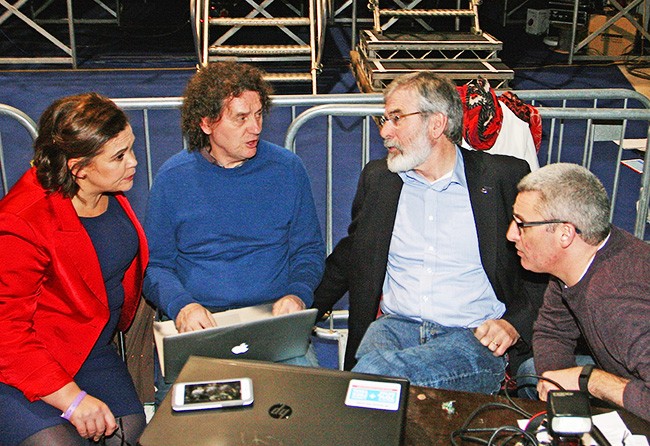 Unlike last year, there was no strutting into the count centre to boast.'

Instead, she sped in and locked herself away in a sideroom, hidden behind drawn blinds, locked doors, and two burly security guards. Foster kept the media at bay.

Despite topping the poll herself, Foster wasn’t elected on the first count and, disastrously, her running mate, the pompous Baron Maurice Morrow, lost out.

Back in South Belfast, where the DUP also lost a seat, the talk of intra-party rivalry and dirty tricks is rife amongst erstwhile loyalist colleagues. 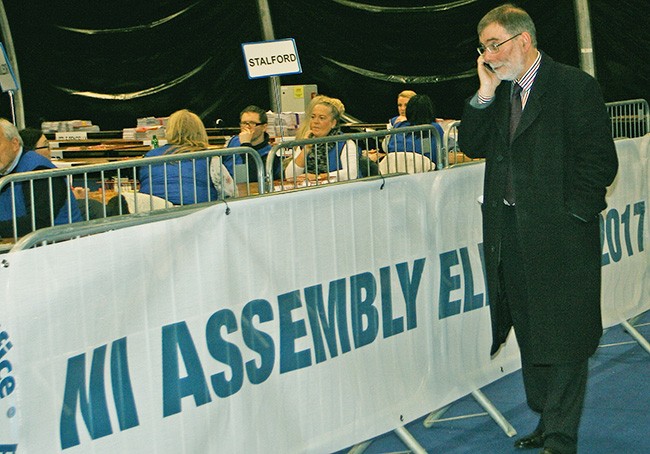 Similar stories emerged from North Belfast where Nelson McCausland was said to have encroached into areas designated for Paula Bradley although this foray failed.

Ten seats down from last year, DUP survivors, speaking through those staunchly unionist dailies, the News Letter and the Belfast Telegraph, are questioning Arlene Foster’s ability to hold the party together. The future for ‘Queen Arlene’ is uncertain as we go to press.

That unionism has lost its overall majority in the North since the inception of the Orange State has massive psychological as well as political ramifications for unionism.

What republicans would like to hear from the unionist leadership post-election and on the cusp of Brexit is that they are willing to deal with the issues and nationalists with respect and equality rather than immerse themselves in some post-truth rejection of the political reality we are now in.