Make 2017 a springboard to raise international support for Irish unity 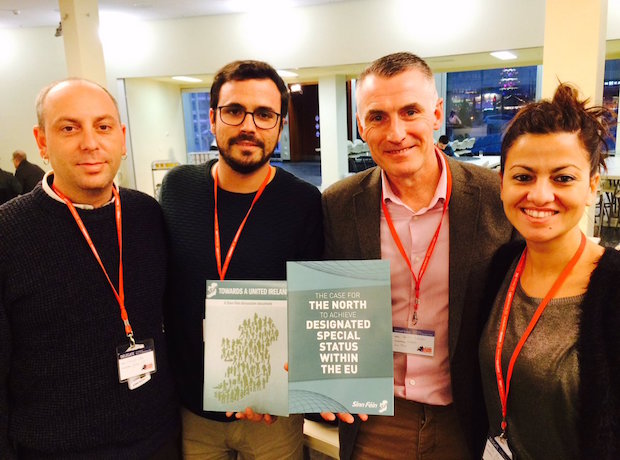 HUNDREDS of delegates from European political parties of the Left and from further afield gathered last weekend at the European Left 5th Congress in Berlin to discuss the Congress theme and programme, Building Alliances for a Europe of Solidarity.

I represented Sinn Féin and addressed this huge event on the issues of Brexit, Irish Unity and a Europe of Solidarity.

In my opening remarks I pointed out that dramatic changes for politics and society have been brought about by the British state’s decision to exit the EU; by the election of Donald Trump in the USA, and his emergent administration; and the momentum of right-wing politics across Europe. 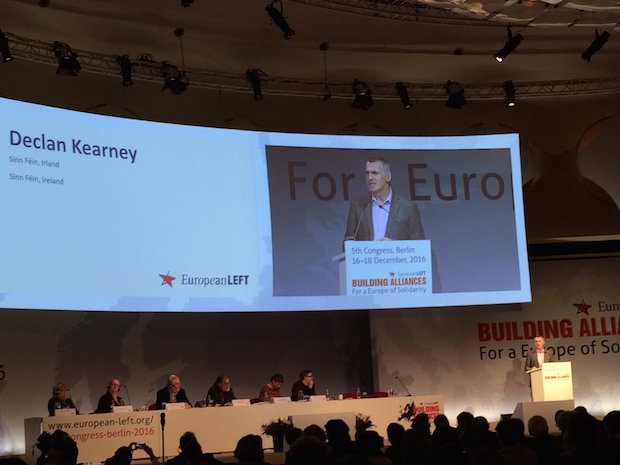 The reality is that the rise of populism and right-wing reactionary political forces now present new strategic, political and electoral challenges for the Left and progressives.

Brexit exemplifies this race to the bottom.

It is indisputable that the outcomes from Brexit are all negative.

The prospect of the North being removed from the EU against the will of the citizens in this region, and the return of a ‘hard border’ bringing new divisions in Ireland, has put the issue of Irish reunification back onto the political agenda.

So, Brexit has changed everything. 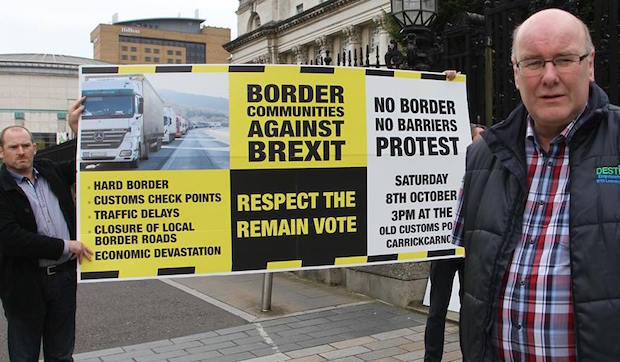 The Brexit decision highlights again the contradiction and undemocratic nature of Ireland’s partition.

It exposes the folly of one part of our country being in the EU and another part of the island being removed.

Partition has been a failure.

It is a block to progressive political change and social transformation in Ireland.

The Brexit referendum was a proxy for the ideological civil war within the British Conservative Government and its battle against the electoral rise of narrow English nationalism epitomised by UKIP.

Anti-immigrant sentiment, xenophobia and political alienation within sections of the English media fuelled the debate which took place. 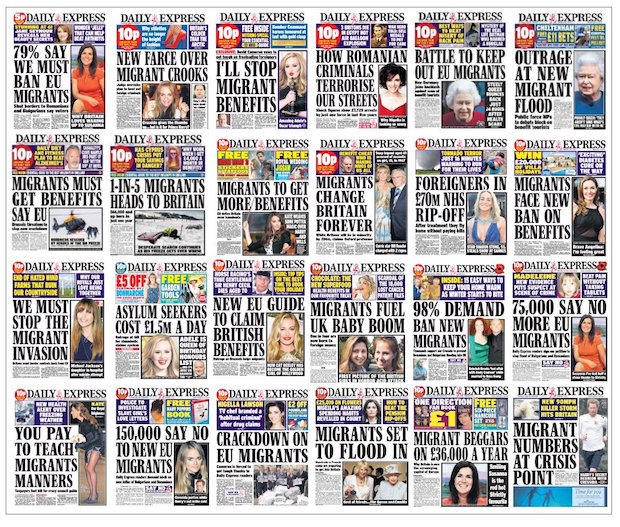 As a result, the British state is gripped by an existential constitutional and political crisis.

The consequence, however, is that all these factors have pulled Ireland into unchartered territory.

But Sinn Féin is putting forward a decisive alternative agenda to that uncertainty.

On 8 December we launched our document The Case for the North to Achieve Special Designated Status Within the EU.

We are saying that it is essential to secure a Special Designated Status for the North of Ireland within the EU and in an all-Ireland framework.

The key elements of that must be to ensure:-

-      Protection of EU access to employment, social security and healthcare;

Sinn Féin refuses to accept that the democratic decision of voters in the North – or Irish national interests – should be subverted by English voters or the British Conservative Party.

Brexit has fundamentally changed the political context in Ireland, North and South.

It has begun a new national debate about the future of politics and society in Ireland and prompted a re-evaluation of Ireland’s relationship with the European Union.

Sinn Féin believes Ireland’s place is in Europe – but that Europe needs to change.

In the immediate term, Sinn Féin recognises the need to build alliances with other regions such as Scotland who share our objective to remain in Europe. Yesterday (Tuesday) the Scottish Government published its alternative prospectus, Scotland’s Place in Europe. 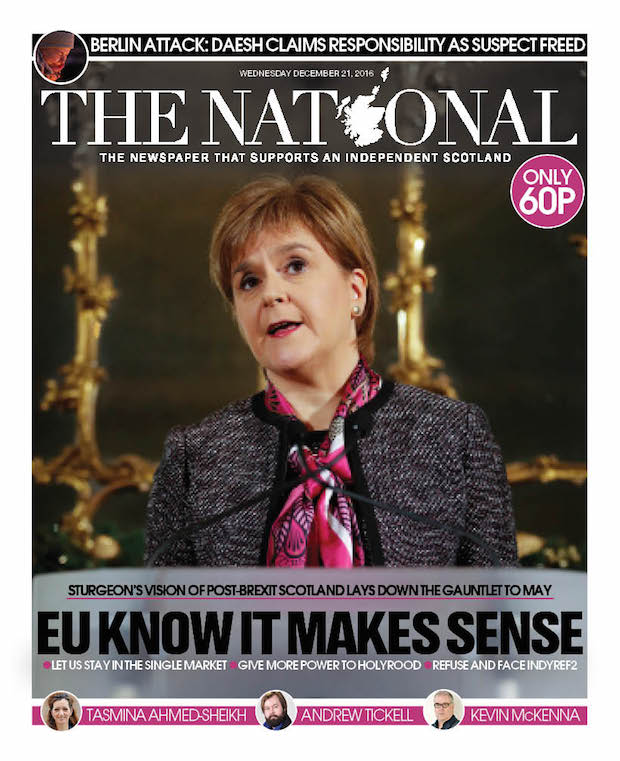 It makes sense for us to work positively together to maximise our influence in the forthcoming negotiations on Brexit.

Our party also recognises the need for broad political support within the European Parliament and among member states to achieve Special Designated Status.

It is obvious that there is significant goodwill across the Left and progressive opinion in Europe for republican democratic objectives.

The Left and progressive civic opinion in Europe are crucial in advancing the strategic objective of getting Special Designated Status for the North of Ireland.

In the post-Brexit context, that is the only way to protect the Peace Process; Irish national interests; economic opportunity; and to defend workers and social, democratic and human rights. 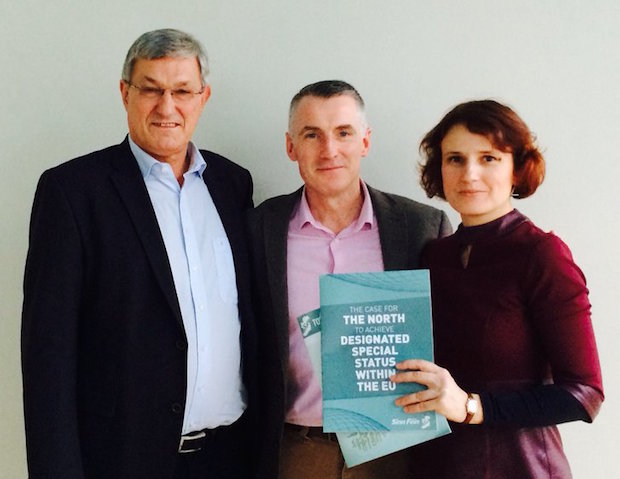 There was widespread interest in Berlin in Sinn Féin’s proposals. I outlined our proposals for delegates and visitors from Greece, Germany, Spain, France, Euskal Herria, Italy and elsewhere.

It was particularly useful to have bilateral meetings with leadership representatives from SYRIZA of Greece and Die Linke of Germany (Die Linke has just become a coalition partner in the government of Berlin’s regional parliament). This type of goodwill and solidarity needs to be consolidated and taken forward. 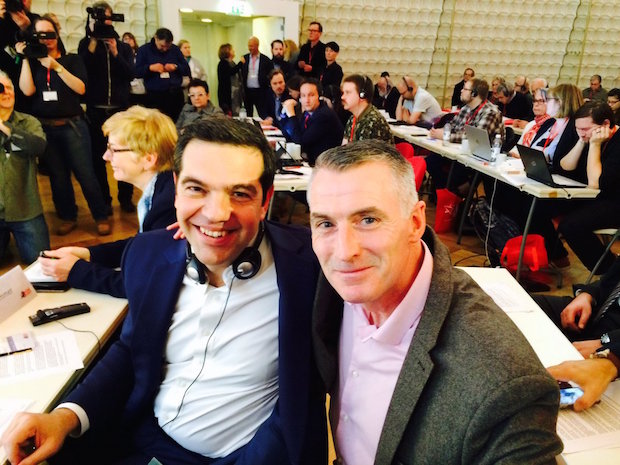 ● With Prime Minister of Greece Alexis Tsipras, President of SYRIZA and Vice-President of European Left

Like Sinn Féin, the European Left is a strong advocate of a new Europe based upon equality and social solidarity.

The EU is supposed to be a vehicle for co-operation and friendship. Instead, it has become associated with elites and undemocratic control; the punitive treatment of the Greek people; a lack of compassion over the refugee crisis; and its disgraceful response to the conflicts in the Middle East.

Sinn Féin believes an alternative must be found in the form of a social Europe – a Europe of solidarity which puts people first. 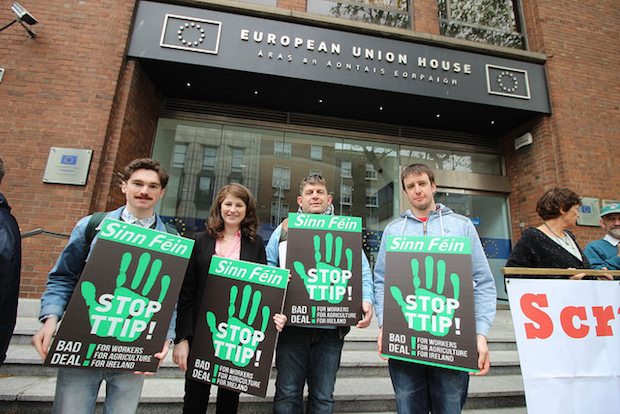 We advocate a democratic Europe that respects national sovereignty and accountability.

We oppose moves towards the creation of a European army and pan-European militarism.

Of course, the post-Brexit context poses big challenges for democrats, progressives, and those on the Left in Ireland and who are committed to the transformation of Europe.

It also opens up new opportunities to popularise domestic and international support for Irish reunification and to forge new progressive relationships between Ireland, Europe and the wider international community.

That potential in itself is a hugely positive and significant development because it creates new circumstances within which to develop important political and civic alliances for social and economic transformation across Europe.

Parties of the Left and other progressives must engage closely with each other and agree how to maximise popular support in pursuit of shared strategic objectives.

Opposition to Brexit and securing Special Designated Status for the North is an important element of such a political trajectory.

This post-Brexit context is now an opportunity to promote the democratic argument for Irish unity.

Developing an international axis (and in mainland Europe itself in particular) to end partition and achieve Irish unity has become more important than ever.

Strategically maintaining Ireland’s position in Europe is an important beachhead at this stage in the pursuit of Irish national independence.

That is the best way to strengthen the links between the struggle for ‘An Ireland of Equals’ and achieving a Europe of solidarity.

A new phase of political change has arrived. Brexit is a strategic moment to convert a crisis into positive opportunity.

The significant influence of the Left in Europe and wider international community has a very important role to play in helping to facilitate the democratic transition towards a new, agreed Ireland.

2017 should be seized as a springboard from which to intensify international support for Irish unity and independence.