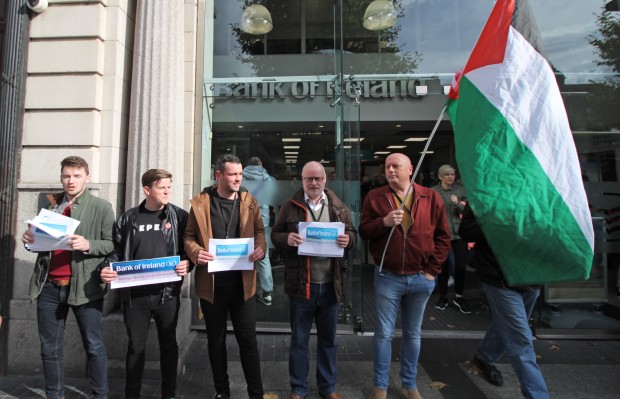 THE YOUTH WING of Sinn Féin staged a protest on Monday at the Bank of Ireland on Dublin City’s O’Connell Street against the bank’s weekend closure of the account belonging to the Ireland Palestine Solidarity Campaign.

Bank of Ireland shut down the account because it considered the Palestine solidarity group to be associating with a “high-risk country”. It is not believed that the Bank of Ireland has taken this action against any other country or organisation in the world.

The IPSC said the shock news came after 15 years of banking with BoI.

“It’s difficult to escape the conclusion that this attack on our ability to bank is a politically-motivated measure to silence a human rights organsiation that campaigns for Boycott, Divestment and Sanctions (BDS) against Israel until it fulfills its obligations under international law – a campaign the Irish Government views as entirely legitimate,” the IPSC said.

“Such closures of accounts of BDS-supporting organisations have occurred all over Europe – in France, Germany, Austria and Britain.” 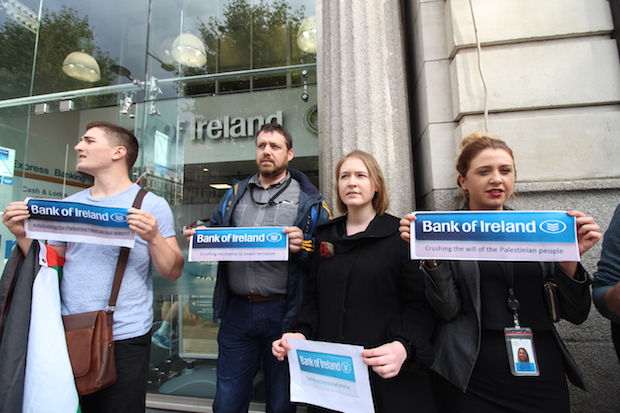 Eoin Rochford, a spokesperson for Sinn Féin Republican Youth, told An Phoblacht that the Bank of Ireland action is unjustified, insulting and plain wrong.

“We are asking people to support the BDS campaign to bring an end to Israeli apartheid, for people who have accounts with the Bank of Ireland to write or call its head office to protest the decision, and consider closing their accounts in solidarity with Palestine.”

Sinn Féin Senator Paul Gavan, who was in Palestine in August on a fact-finding visit, was also at the protest.

He described the Bank of Ireland’s action as “corporate censorship, a political and vindictive position against decency and justice for the Palestinian people”.

“The IPSC are a non-profit NGO who handed their audit reports to the bank. Funding is used for advocacy with no funds being sent directly to Palestine. 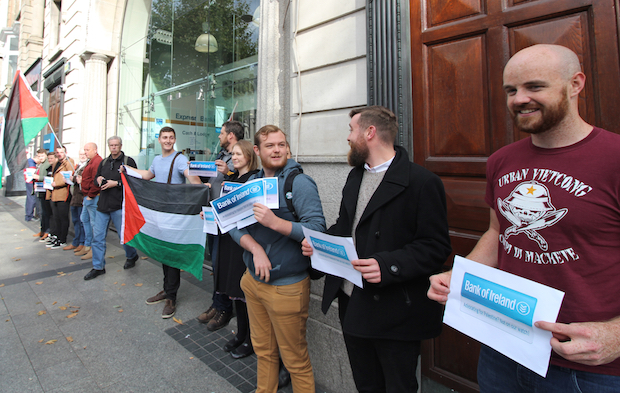 ◼︎ The IPSC has appealed for people to “consider making a regular subscription to our help us in our ‘risky’ work advocating for freedom, justice and equality for the people of Palestine” by donating here.