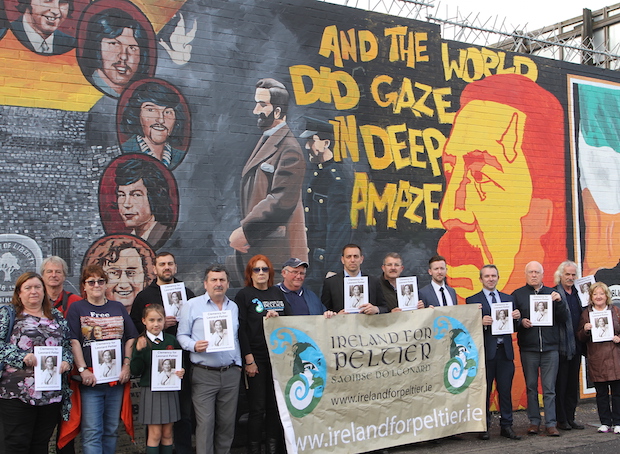 THE global call for clemency for Native American civil rights activist Leonard Peltier – in his 41st year of incarceration in the United States – was echoed in Belfast on Monday 12 September as sympathisers gathered at the world-famous International Wall to urge his release on his 72nd birthday.

Leonard Peltier, a leader of the American Indian Movement, was convicted in 1977 of murdering two FBI agents at the Pine Ridge Reservation in 1975. He is serving two consecutive life sentences.

Newsweek magazine has reported that “the long and complicated case history reveals a pattern of misconduct by the FBI”, including the coercion of an alleged eyewitness, suppression of potentially exculpatory evidence “and deep concerns about the agency’s political motivation for so zealously pursuing the case”.

Newsweek noted that the US Parole Commission has acknowledged to Peltier the “lack of any direct evidence that you personally participated in the executions of two FBI agents”. 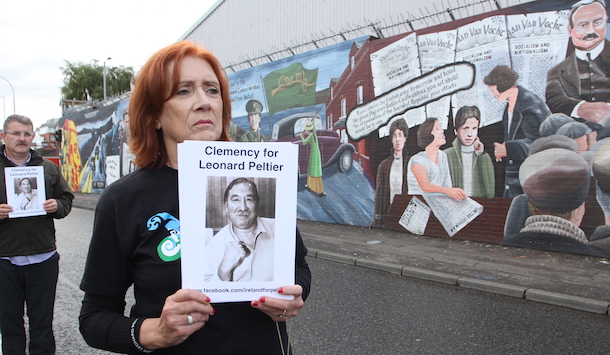 Monday’s protest in Belfast took place in front of an image of the American Indian Movement activist painted by Belfast’s muralists who have highlighted injustices down the decades not just in Ireland but around the world, from South Africa and Palestine to Latin and North America.

Indeed amongst those to attend the protest was renowned muralist Danny Devenny, who has used his street art over the years to highlight the unjust incarceration of Peltier.

Also present were Geri Timmons of the ‘Ireland for Peltier’ group and solicitor Pádraig Ó Muirígh, whose law firm endorses the campaign.

Prominent there too were activist and writer Danny Morrison (a republican former prisoner and a past editor of An Phoblacht/Republican News), Sinn Féin's Mary McConville, and representatives of the Ballymurphy Massacre campaign group. 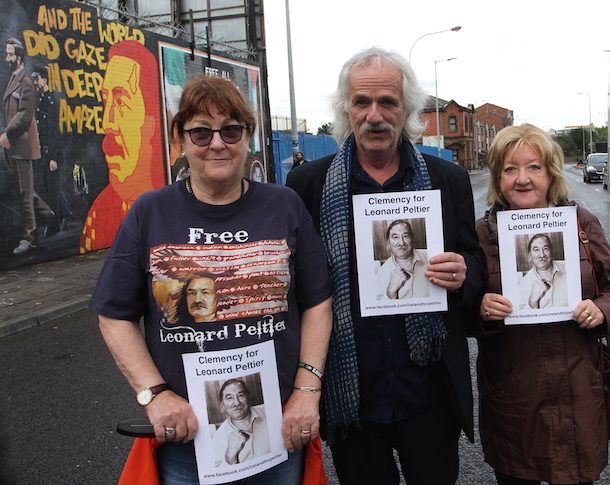 “Peltier has been imprisoned for 40 years, serving two consecutive life sentences despite the fact that the legal processes surrounding his extradition, conviction and post-conviction have been riddled with flaws.

“Amnesty International and legal experts who have studied the case have raised serious concerns about his conviction.

“In the years since, Peltier has repeatedly been denied parole and exhausted all of this legal remedies, despite evidence of coerced testimony and withholding of key ballistics evidence at trial.

“Peltier is now 72 years old and in poor health.

“The moment for action is decades overdue in this case. As President Obama approaches his last few months in office and continues to announce record-breaking numbers of commutations, it is crucial that he grant Leonard Peltier clemency. Despite the political factors which may have influenced the way the case was prosecuted, Leonard Peltier has remained in prison all these years. He is not eligible for parole again until 2024.

“President Obama now has the opportunity to bring some measure of closure to a case that has troubled many people for decades.” 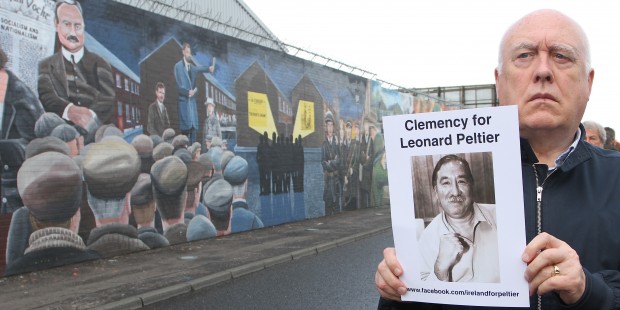 ● Activist and writer Danny Morrison calls for clemency for Peltier