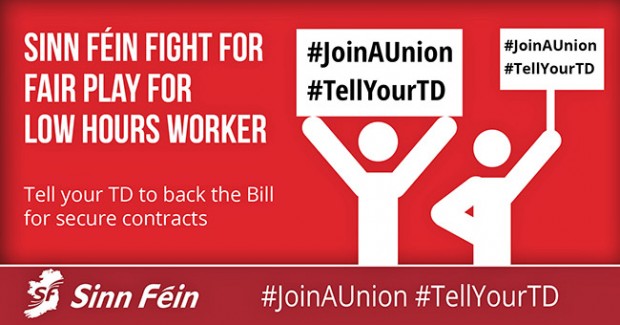 'Deputy Collins, I did not come in here to do what your mother should have done and put manners on you!'

“All our Bill seeks to do is ensure that the hours a person works is what is reflected in their contract. It allows an employee to put in writing a request to their employer to move into the appropriate band, which is the weekly hours they work, and it gives them certainty of hours because they can and do fluctuate up and down.”

He explained there are safeguards and checks in the Bill, both for the employer and workers, and any dispute would be decided by the Workplace Relations Commission.

“It dehumanises workers, puts huge pressure on the state in social transfers, reduces people’s disposable income and impoverishes households and children. This is absolutely unnecessary and serves an employment model whereby employers want to have it both ways.”

Kathleen Funchion TD, who worked in the trade union movement before being elected as a Dáil deputy, said women are particularly affected by zero-hours contracts as they are more likely to be in part-time or low-hours jobs:

“A person on a 15-hour contract who actually works 30 hours would be denied a mortgage.”

While opposition from the party of big business, Fine Gael, was unsurprising, Fianna Fáil’s Niall Collins TD railed against the Bill despite his party leader promising to ban zero-hours contracts in the February general election campaign.

Much of his speech focused on issues north of the Border, accusing Sinn Féin of doing nothing to get rid of zero-hours contracts there. Of course, had Collins actually looked into the matter he would have seen that Sinn Féin had brought forward amendments in the Assembly to the Employment Bill to ban zero-hours contracts but that this was blocked by Alliance Party Minister Stephen Farry last February.

Niall Collins then went on to bizarrely claim that amendments put forward by his party, which include an attempt to delay the Bill for one year, had the support of the Irish Congress of Trade Unions (ICTU). This prompted ICTU to phone Sinn Féin offices moments later and confirm that what Fianna Fáil had claimed was utter tripe.

“We have just been contacted by ICTU which would like the record to be amended to the effect that Fianna Fáil has no basis for its claim and that Deputy Niall Collins will receive a letter from ICTU in the morning setting him straight.

“I ask the deputy to bring the letter to the floor of this chamber tomorrow in order that the record can be corrected.” 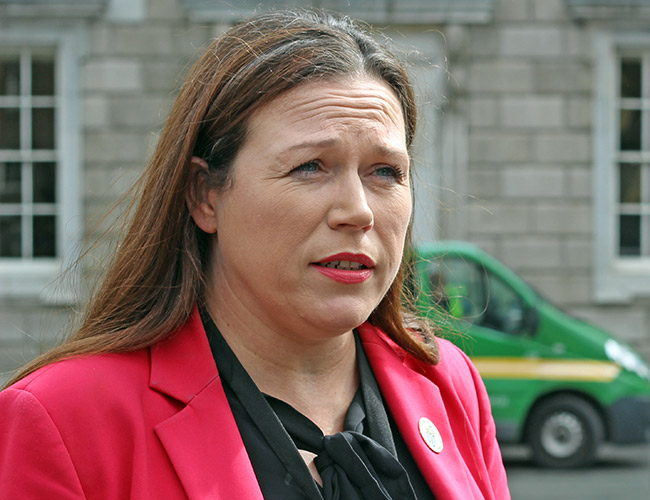 “I rarely find myself in a situation where I am speechless but I am speechless this evening listening to the nonsense coming from both sides of the House. We have Fine Gael and its very best friend in Government coming together to ensure that workers cannot have a contract that simply reflects the hours they work.”

She accused Fine Gael and Fianna Fáil of teaming up to protect unscrupulous employers.

“Zero-hours and low-hours contracts wreck people’s lives,” she said. “I have represented people and fought employers – the people the Minister and Minister of State are in here defending tonight.”

Clearly upset at being caught out earlier in the evening, Niall Collins then spent much of the rest of the debate gratuitously heckling those speaking.

At one point, Louise O’Reilly turned on him and told him, to cheers from all sides of the House:

“Deputy Collins, I did not come in here to do what your mother should have done and put manners on you!”

Fine Gael’s Mary Mitchell O’Connor (Minister for Jobs, Enterprise & Innovation) carped that the Bill would add “significant burdens” on employers, one of which would be requiring employers to display notices outlining availability of working hours over the next month.

“These notices will have to be in English and Irish and in other languages as required. Imagine telling a Silicon Valley company that it has to display work rosters as Gaeilge in Ireland,” she complained.

It was a comment which Sinn Féin’s Pat Buckley described as shameful. “It is our national language,” he retorted.

Fianna Fáil’s amendment to defer the passing of the Bill for at least 12 months was passed by 100 votes to 43.

Fianna Fáil, Fine Gael and some Independents voted to defer the Bill while this was rejected by Sinn Féin, Labour, AAA/PBP, Social Democrats and the Green Party.